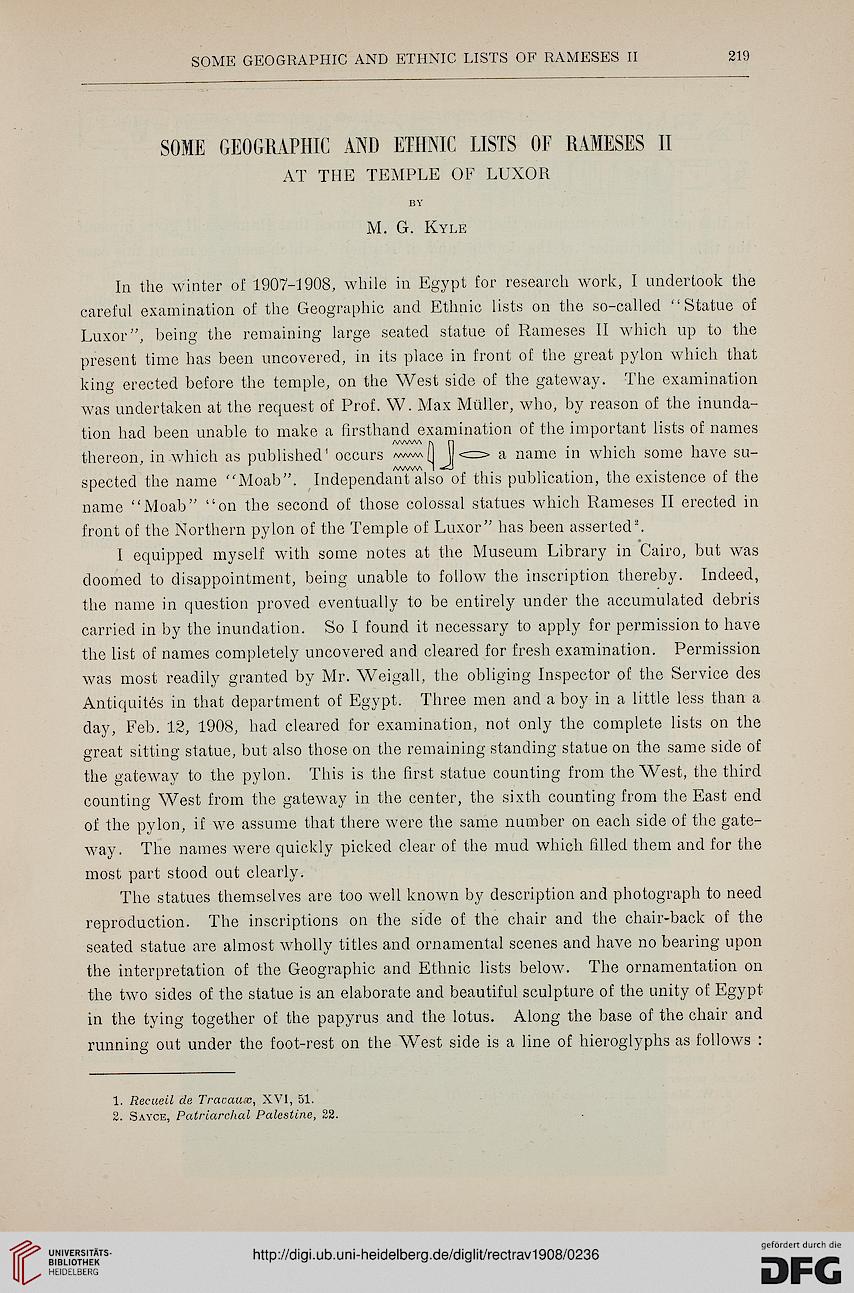 SOME GEOGRAPHIC AND ETHNIC LISTS OF RAMESES II

AT THE TEMPLE OF LUXOR

In the winter of 1907-1908, while in Egypt for research work, I undertook the
careful examination of the Géographie and Ethnie lists on the so-called "Statue of
Luxor", beirig the remaining large seated statue of Rameses II which up to the
présent time has been uncovered, in its place in front of the great pylon which that
king erected before the temple, on the West side of the gateway. The examination
was undertaken at the request of Prof. W. Max Millier, who, by reason of the inunda-
tion had been unable to make a firsthand examination of the important lists of names

thereon, in which as published1 occurs aaa^a( l a name in which some have su-
spected the name "Moab". Indépendant also of this publication, the existence of the
name "Moab" "on the second of those colossal statues which Rameses II erected in
front of the Northern pylon of the Temple of Luxor" has been asserted2.

I equipped myself with some notes at the Muséum Library in Cairo, but was
doomed to clisappointment, being unable to follow the inscription thereby. Indeed,
the name in question proved eventually to be entirely under the accumulated débris
carried in by the inundation. So I found it necessary to apply for permission to have
the list of names completely uncovered and cleared for fresh examination. Permission
was most readily granted by Mr. Weigall, the obliging Inspector of the Service des
Antiquités in that department of Egypt. Three men and a boy in a little less than a
day, Feb. 12, 1908, had cleared for examination, not only the complète lists on the
great sitting statue, but also those on the remaining standing statue on the same side of
the gateway to the pylon. This is the first statue counting from the West, the third
counting West from the gateway in the center, the sixth counting from the East end
of the pylon, if we assume that there were the same number on each side of the gate-
way. The names were quickly picked clear of the mud which filled them and for the
most part stood out clearly.

The statues themselves are too well known by description and photograph to need
reproduction. The inscriptions on the side of the chair and the chair-back of the
seated statue are almost wholly titles and ornamental scènes and have no bearing upon
the interprétation of the Géographie and Ethnie lists below. The ornamentation on
the two sides of the statue is an elaborate and beautiful sculpture of the unity of Egypt
in the tying together of the papyrus and the lotus. Along the base of the chair and
running out under the foot-rest on the West side is a line of hieroglyphs as follows :