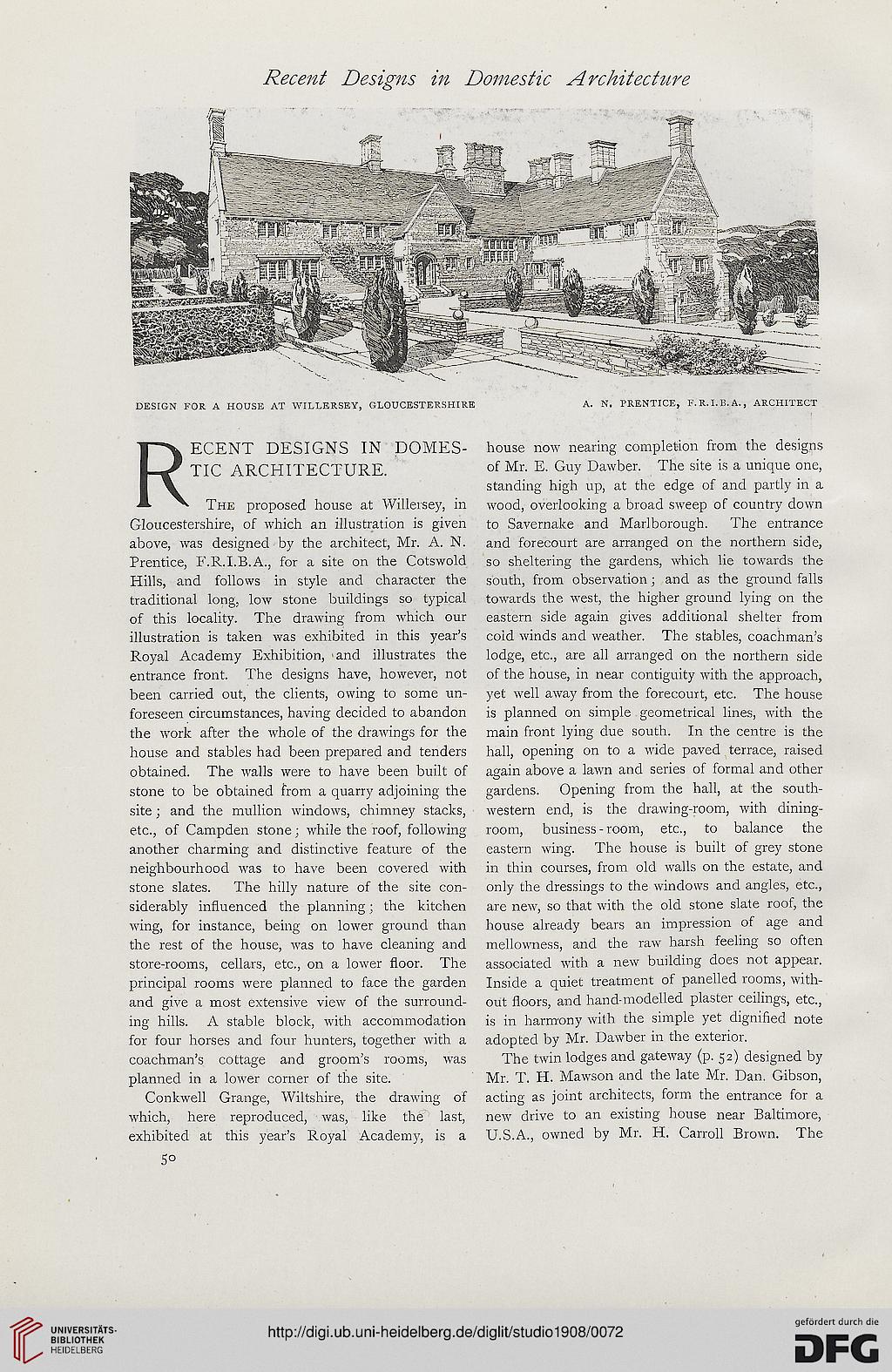 RECENT DESIGNS IN DOMES-
TIC ARCHITECTURE.
The proposed house at Willersey, in
Gloucestershire, of which an illustration is given
above, was designed by the architect, Mr. A. N.
Prentice, F.R.I.B.A., for a site on the Cotswold
Hills, and follows in style and character the
traditional long, low stone buildings so typical
of this locality. The drawing from which our
illustration is taken was exhibited in this year's
Royal Academy Exhibition, 'and illustrates the
entrance front. The designs have, however, not
been carried out, the clients, owing to some un-
foreseen circumstances, having decided to abandon
the work after the whole of the drawings for the
house and stables had been prepared and tenders
obtained. The walls were to have been built of
stone to be obtained from a quarry adjoining the
site; and the mullion windows, chimney stacks,
etc., of Campden stone; while the roof, following
another charming and distinctive feature of the
neighbourhood was to have been covered with
stone slates. The hilly nature of the site con-
siderably influenced the planning; the kitchen
wing, for instance, being on lower ground than
the rest of the house, was to have cleaning and
store-rooms, cellars, etc., on a lower floor. The
principal rooms were planned to face the garden
and give a most extensive view of the surround-
ing hills. A stable block, with accommodation
for four horses and four hunters, together with a
coachman's cottage and groom's rooms, was
planned in a lower corner of the site.

Conkwell Grange, Wiltshire, the drawing of
which, here reproduced, was, like the last,
exhibited at this year's Royal Academy, is a

house now nearing completion from the designs
of Mr. E. Guy Dawber. The site is a unique one,
standing high up, at the edge of and partly in a
wood, overlooking a broad sweep of country down
to Savernake and Marlborough. The entrance
and forecourt are arranged on the northern side,
so sheltering the gardens, which lie towards the
south, from observation; and as the ground falls
towards the west, the higher ground lying on the
eastern side again gives additional shelter from
cold winds and weather. The stables, coachman's
lodge, etc., are all arranged on the northern side
of the house, in near contiguity with the approach,
yet well away from the forecourt, etc. The house
is planned on simple geometrical lines, with the
main front lying due south. In the centre is the
hall, opening on to a wide paved terrace, raised
again above a lawn and series of formal and other
gardens. Opening from the hall, at the south-
western end, is the drawing-room, with dining-
room, business - room, etc., to balance the
eastern wing. The house is built of grey stone
in thin courses, from old walls on the estate, and
only the dressings to the windows and angles, etc.,
are new, so that with the old stone slate roof, the
house already bears an impression of age and
mellowness, and the raw harsh feeling so often
associated with a new building does not appear.
Inside a quiet treatment of panelled rooms, with-
out floors, and hand-modelled plaster ceilings, etc.,
is in harmony with the simple yet dignified note
adopted by Mr. Dawber in the exterior.

The twin lodges and gateway (p. 52) designed by
Mr. T. H. Mawson and the late Mr. Dan. Gibson,
acting as joint architects, form the entrance for a
new drive to an existing house near Baltimore,
U.S.A., owned by Mr. H. Carroll Brown. The