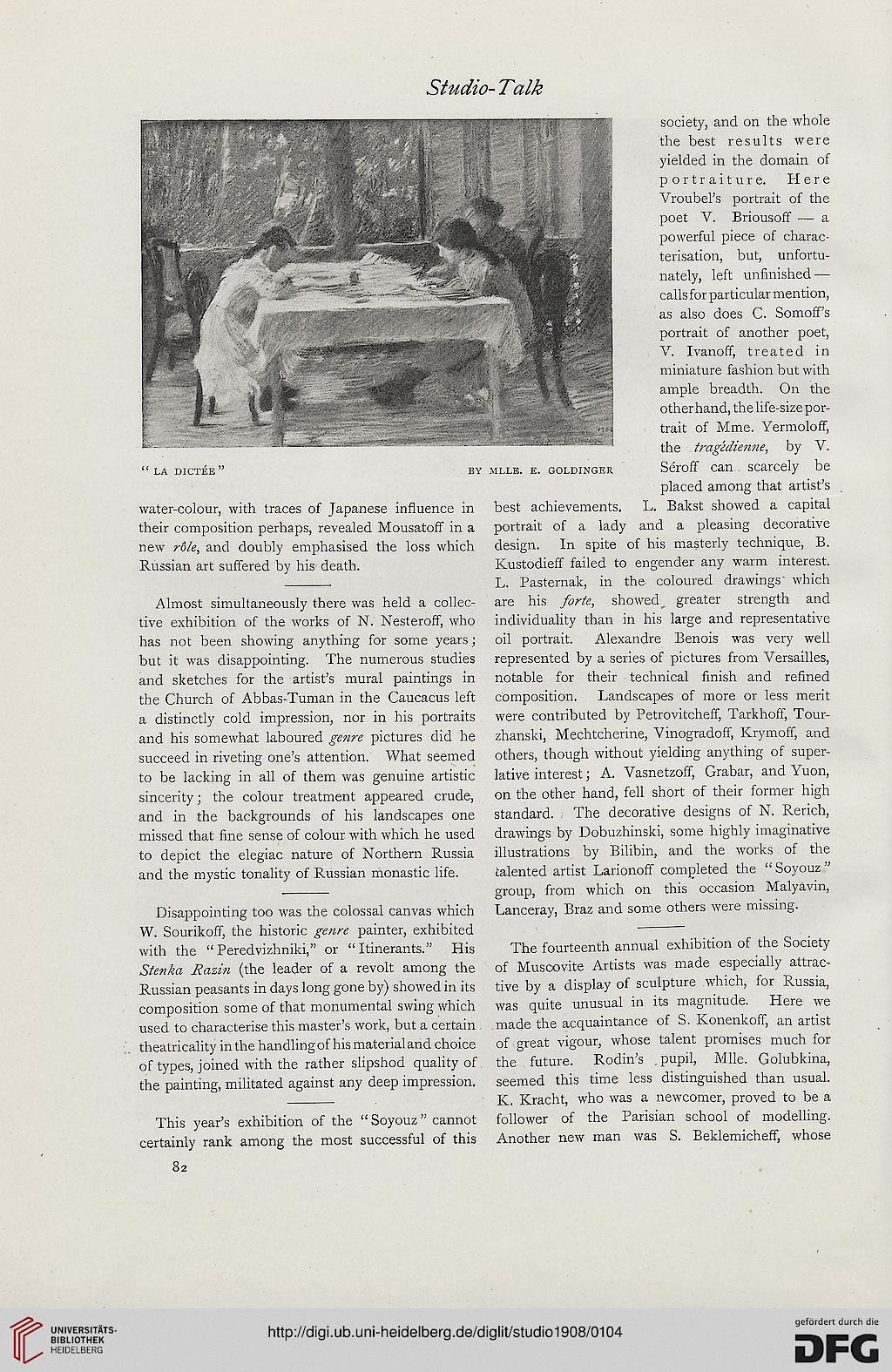 society, and on the whole
the best results were
yielded in the domain of
portraiture. Here
Vroubel's portrait of the
poet V. Briousoff — a
powerful piece of charac-
terisation, but, unfortu-
nately, left unfinished —
calls for particular mention,
as also does C. Somoff's
portrait of another poet,
V. Ivanoff, treated in
miniature fashion but with
ample breadth. On the
other hand, the life-size por-
trait of Mme. Yermoloff,
the tragedienne, by V.

"la dictee" by mlle. e. goldinger Seroff can. scarcely be

placed among that artist's

water-colour, with traces of Japanese influence in best achievements. L. Bakst showed a capital
their composition perhaps, revealed Mousatoff in a portrait of a lady and a pleasing decorative
new role, and doubly emphasised the loss which design. In spite of his masterly technique, B.
Russian art suffered by his death. Kustodieff failed to engender any warm interest.

- L. Pasternak, in the coloured drawings which

Almost simultaneously there was held a collec- are his forte, showed greater strength and

tive exhibition of the works of N. Nesteroff, who individuality than in his large and representative

has not been showing anything for some years; oil portrait. Alexandre Benois was very well

but it was disappointing. The numerous studies represented by a series of pictures from Versailles,

the Church of Abbas-Tuman in the Caucacus left composition. Landscapes of more or less merit

a distinctly cold impression, nor in his portraits were contributed by Petrovitcheff, Tarkhoff, Tour-

succeed in riveting one's attention. What seemed others, though without yielding anything of super-

to be lacking in all of them was genuine artistic lative interest; A. Vasnetzoff, Grabar, and Yuon,

sincerity; the colour treatment appeared crude, on the other hand, fell short of their former high

and in the backgrounds of his landscapes one standard. The decorative designs of N. Rerich,

missed that fine sense of colour with which he used drawings by Dobuzhinski, some highly imaginative

to depict the elegiac nature of Northern Russia illustrations by Bilibin, and the works of the

- group, from which on this occasion Malyavin,

Disappointing too was the colossal canvas which Lanceray, Braz and some others were missing.

with the "Peredvizhniki," or "Itinerants." His The fourteenth annual exhibition of the Society

Russian peasants in days long gone by) showed in its tive by a display of sculpture which, for Russia,

composition some of that monumental swing which was quite unusual in its magnitude. Here we

used to characterise this master's work, but a certain made the acquaintance of S. Konenkoff, an artist

theatricality in the handling of his material and choice of great vigour, whose talent promises much for

of types, joined with the rather slipshod quality of the future. Rodin's pupil, Mlle. Golubkina,

the painting, militated against any deep impression, seemed this time less distinguished than usual.

- K. Kracht, who was a newcomer, proved to be a

This year's exhibition of the " Soyouz" cannot follower of the Parisian school of modelling,
certainly rank among the most successful of this Another new man was S. Beklemicheff, whose