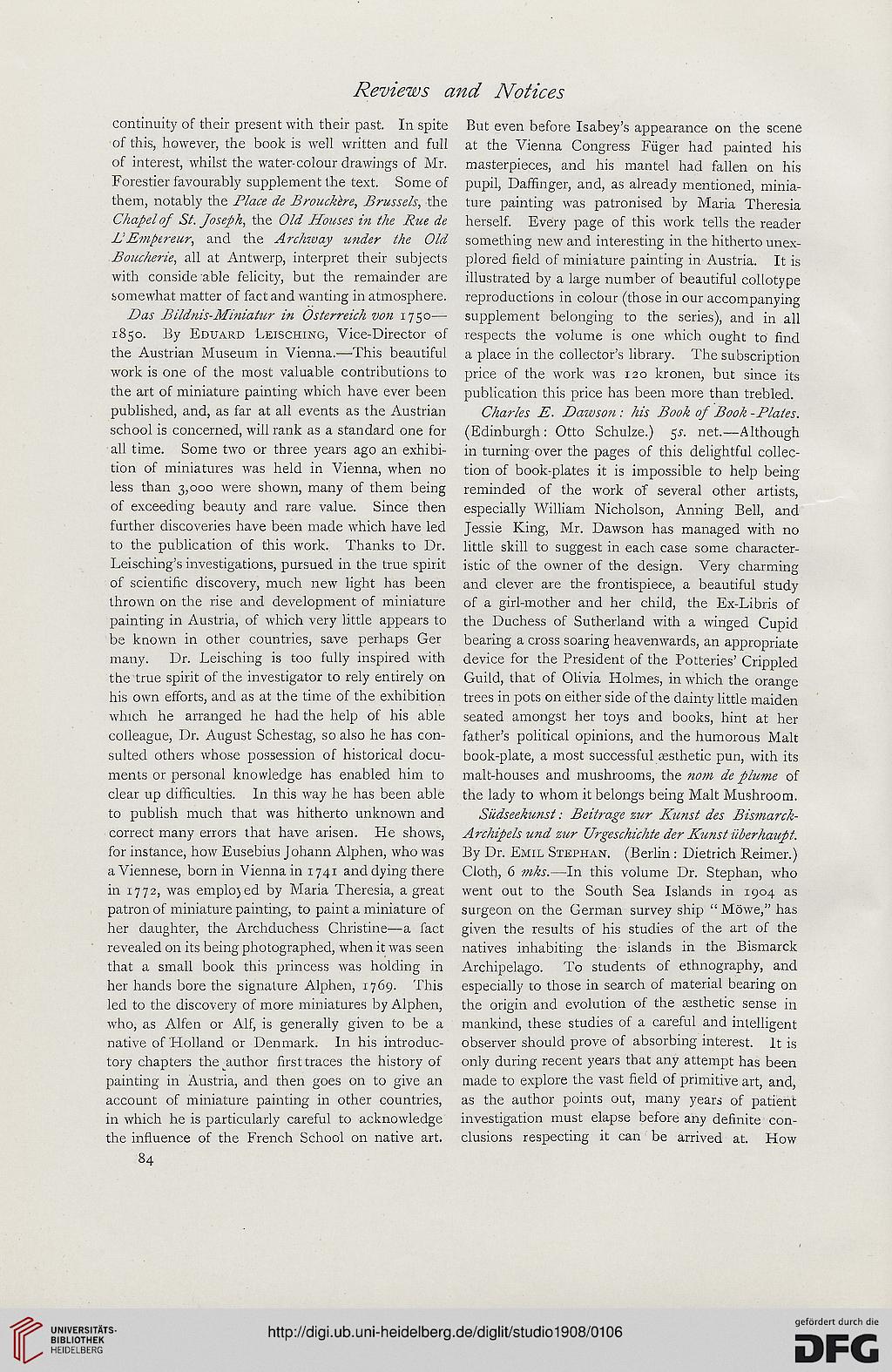 continuity of their present with their past. In spite
of this, however, the book is well written and full
of interest, whilst the water-colour drawings of Mr.
Forestier favourably supplement the text. Some of
them, notably the Place de Brouckere, Brussels, the
Chapel of St. Joseph, the Old Houses in the Rue de
U Empereur, and the Archway under the Old
Boucherie, all at Antwerp, interpret their subjects
with conside able felicity, but the remainder are
somewhat matter of fact and wanting in atmosphere.

Das Bildnis-Miniatur in Osterreich von 1750—
1850. By Eduard Leisching, Vice-Director of
the Austrian Museum in Vienna.—This beautiful
work is one of the most valuable contributions to
the art of miniature painting which have ever been
published, and, as far at all events as the Austrian
school is concerned, will rank as a standard one for
all time. Some two or three years ago an exhibi-
tion of miniatures was held in Vienna, when no
less than 3,000 were shown, many of them being
of exceeding beauty and rare value. Since then
further discoveries have been made which have led
to the publication of this work. Thanks to Dr.
Leisching's investigations, pursued in the true spirit
of scientific discovery, much new light has been
thrown on the rise and development of miniature
painting in Austria, of which very little appears to
be known in other countries, save perhaps Ger
many. Dr. Leisching is too fully inspired with
the true spirit of the investigator to rely entirely on
his own efforts, and as at the time of the exhibition
which he arranged he had the help of his able
colleague, Dr. August Schestag, so also he has con-
sulted others whose possession of historical docu-
ments or personal knowledge has enabled him to
clear up difficulties. In this way he has been able
to publish much that was hitherto unknown and
correct many errors that have arisen. He shows,
for instance, how Eusebius J ohann Alphen, who was
a Viennese, born in Vienna in 1741 and dying there
in 1772, was emplo)ed by Maria Theresia, a great
patron of miniature painting, to paint a miniature of
her daughter, the Archduchess Christine—a fact
revealed on its being photographed, when it was seen
that a small book this princess was holding in
her hands bore the signature Alphen, 1769. This
led to the discovery of more miniatures by Alphen,
who, as Alfen or Alf, is generally given to be a
native of Holland or Denmark. In his introduc-
tory chapters theLauthor first traces the history of
painting in Austria, and then goes on to give an
account of miniature painting in other countries,
in which he is particularly careful to acknowledge
the influence of the French School on native art.
84

But even before Isabey's appearance on the scene
at the Vienna Congress Fiiger had painted his
masterpieces, and his mantel had fallen on his
pupil, Daffinger, and, as already mentioned, minia-
ture painting was patronised by Maria Theresia
herself. Every page of this work tells the reader
something new and interesting in the hitherto unex-
plored field of miniature painting in Austria. It is
illustrated by a large number of beautiful collotype
reproductions in colour (those in our accompanying
supplement belonging to the series), and in all
respects the volume is one which ought to find
a place in the collector's library. The subscription
price of the work was 120 kronen, but since its
publication this price has been more than trebled.

Charles E. Dawson : his Book of Book -Plates.
(Edinburgh : Otto Schulze.) 5-f. net.—Although
in turning over the pages of this delightful collec-
tion of book-plates it is impossible to help being
reminded of the work of several other artists,
especially William Nicholson, Aiming Bell, and
Jessie King, Mr. Dawson has managed with no
little skill to suggest in each case some character-
istic of the owner of the design. Very charming
and clever are the frontispiece, a beautiful study
of a girl-mother and her child, the Ex-Libris of
the Duchess of Sutherland with a winged Cupid
bearing a cross soaring heavenwards, an appropriate
device for the President of the Potteries' Crippled
Guild, that of Olivia Holmes, in which the orange
trees in pots on either side of the dainty little maiden
seated amongst her toys and books, hint at her
father's political opinions, and the humorous Malt
book-plate, a most successful aesthetic pun, with its
malt-houses and mushrooms, the nom de plume of
the lady to whom it belongs being Malt Mushroom.

Siidseekunst: Beitrage zur Kunst des Bismarck-
Archipels und zur Urgeschichte der Kunst iiberhaupt.
By Dr. Emil Stephan. (Berlin : Dietrich Reimer.)
Cloth, 6 mks.—In this volume Dr. Stephan, who
went out to the South Sea Islands in 1904 as
surgeon on the German survey ship " Mbwe," has
given the results of his studies of the art of the
natives inhabiting the islands in the Bismarck
Archipelago. To students of ethnography, and
especially to those in search of material bearing on
the origin and evolution of the aesthetic sense in
mankind, these studies of a careful and intelligent
observer should prove of absorbing interest. It is
only during recent years that any attempt has been
made to explore the vast field of primitive art, and,
as the author points out, many years of patient
investigation must elapse before any definite con-
clusions respecting it can be arrived at. How