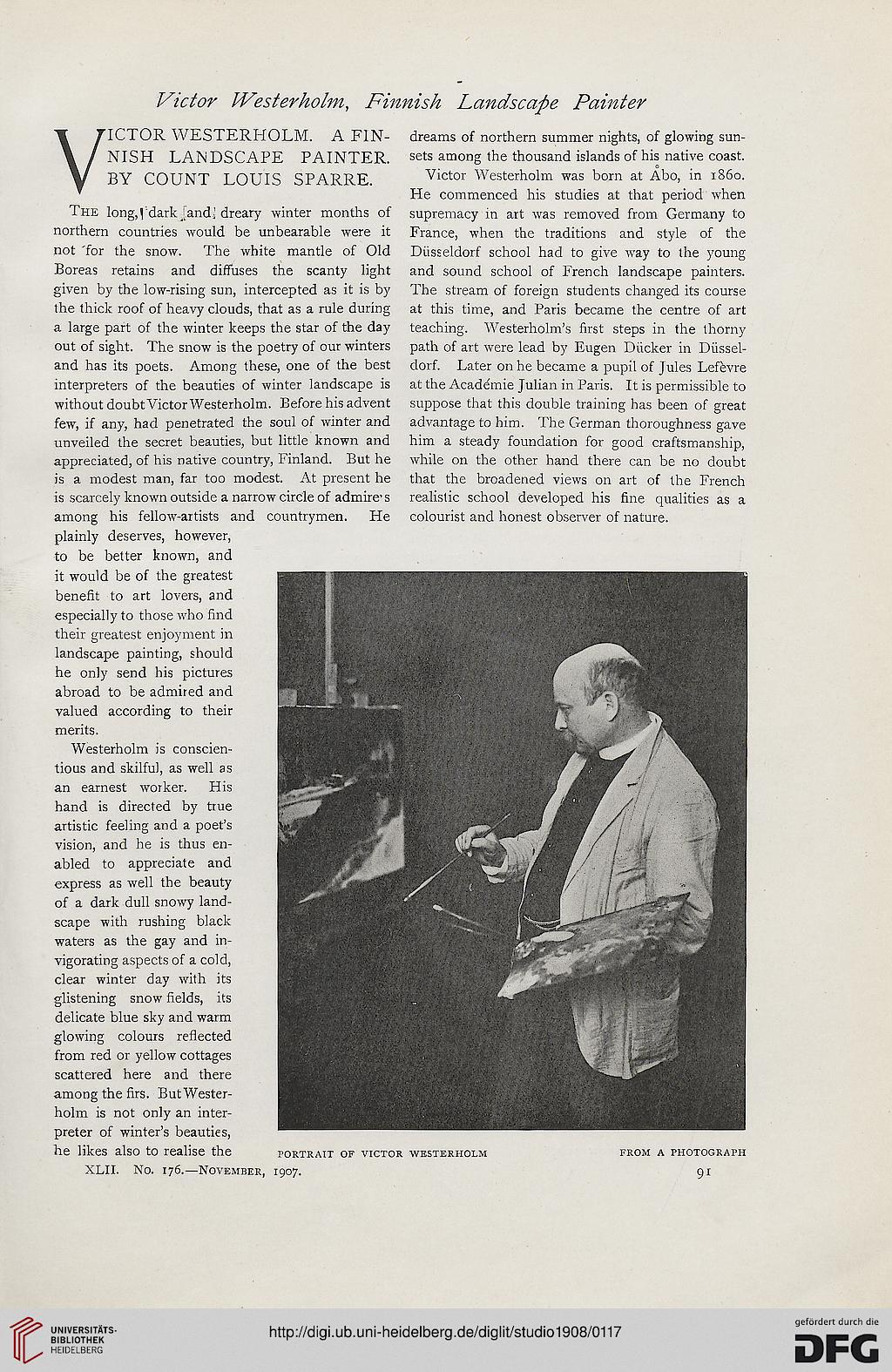 VICTOR WESTERHOLM. A FIN- dreams of northern summer nights, of glowing sun-
NISH LANDSCAPE PAINTER. sets among the thousand islands of his native coast.
BY COUNT LOUIS SPARRE Victor Westerholm was born at Abo, in i860.

He commenced his studies at that period when
The long, J: dark j and \ dreary winter months of supremacy in art was removed from Germany to
northern countries would be unbearable were it France, when the traditions and style of the
not 'for the snow. The white mantle of Old Diisseldorf school had to give way to the young
Boreas retains and diffuses the scanty light and sound school of French landscape painters,
given by the low-rising sun, intercepted as it is by The stream of foreign students changed its course
the thick roof of heavy clouds, that as a rule during at this time, and Paris became the centre of art
a large part of the winter keeps the star of the day teaching. Westerholm's first steps in the thorny
out of sight. The snow is the poetry of our winters path of art were lead by Eugen Diicker in Diissel-
and has its poets. Among these, one of the best dorf. Later on he became a pupil of Jules Lefevre
interpreters of the beauties of winter landscape is at the Academic Julian in Paris. It is permissible to
without doubt Victor Westerholm. Before his advent suppose that this double training has been of great
few, if any, had penetrated the soul of winter and advantage to him. The German thoroughness gave
unveiled the secret beauties, but little known and him a steady foundation for good craftsmanship,
appreciated, of his native country, Finland. But he while on the other hand there can be no doubt
is a modest man, far too modest. At present he that the broadened views on art of the French
is scarcely known outside a narrow circle of admire's realistic school developed his fine qualities as a
among his fellow-artists and countrymen. He colourist and honest observer of nature,
plainly deserves, however,
to be better known, and
it would be of the greatest
benefit to art lovers, and
especially to those who find
their greatest enjoyment in
landscape painting, should
he only send his pictures
abroad to be admired and
valued according to their
merits.

Westerholm is conscien-
tious and skilful, as well as
an earnest worker. His
hand is directed by true
artistic feeling and a poet's
vision, and he is thus en-
abled to appreciate and
express as well the beauty
of a dark dull snowy land-
scape with rushing black
waters as the gay and in-
vigorating aspects of a cold,
clear winter day with its
glistening snow fields, its
delicate blue sky and warm
glowing colours reflected
from red or yellow cottages
scattered here and there
among the firs. But Wester-
holm is not only an inter-
preter of winter's beauties,
he likes also to realise the portrait of victor westerholm from a photograph