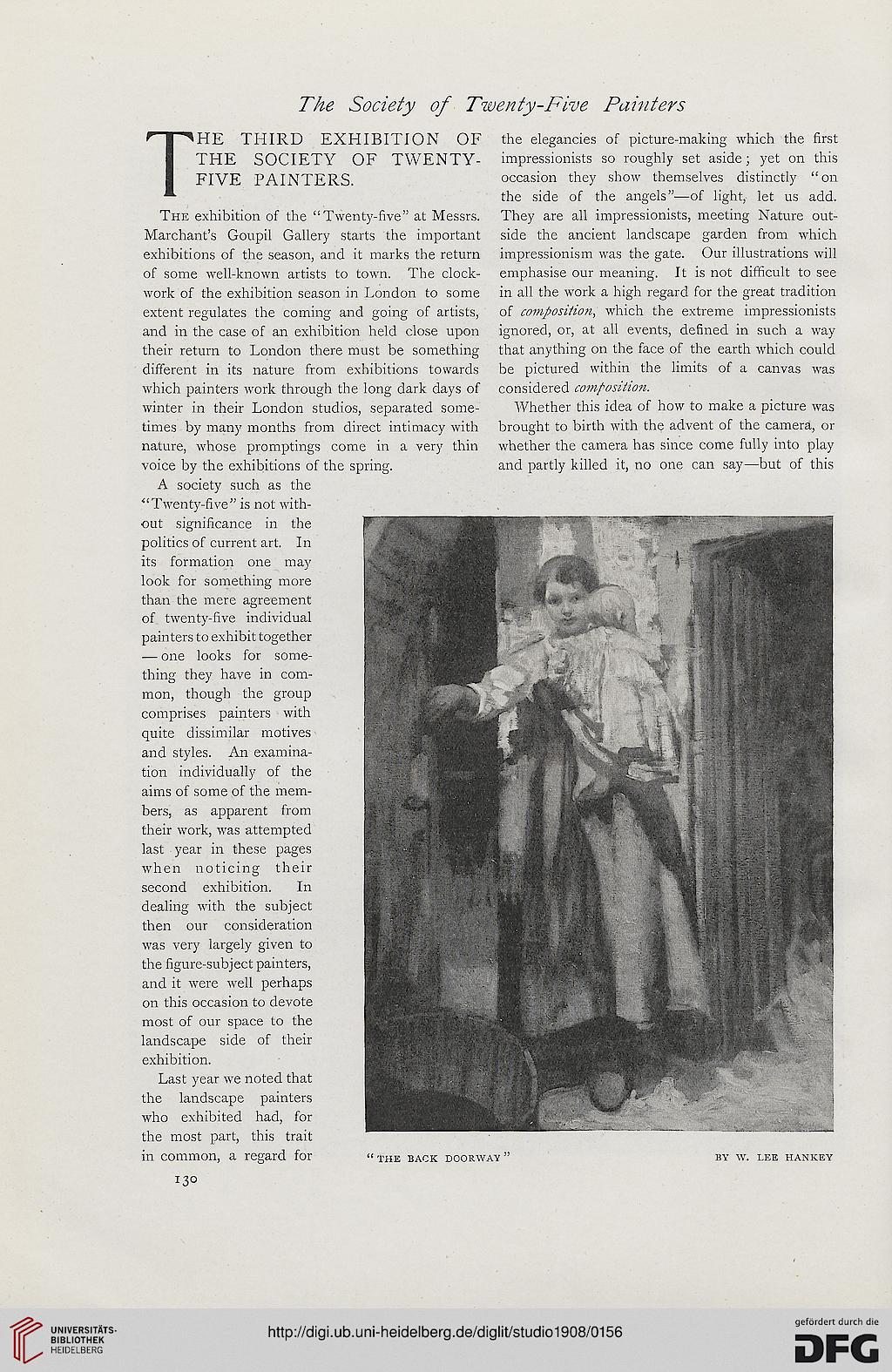 Information about OCR text
The Society of Twenty-Five Painters

THE THIRD EXHIBITION OF the elegancies of picture-making which the first
THE SOCIETY OF TWENTY- impressionists so roughly set aside; yet on this
FIVE PAINTERS. occasion they show themselves distinctly "on

the side of the angels"—of light, let us add.
The exhibition of the "Twenty-five" at Messrs. They are all impressionists, meeting Nature out-
Marchant's Goupil Gallery starts the important side the ancient landscape garden from which
exhibitions of the season, and it marks the return impressionism was the gate. Our illustrations will
of some well-known artists to town. The clock- emphasise our meaning. It is not difficult to see
work of the exhibition season in London to some in all the work a high regard for the great tradition
extent regulates the coming and going of artists, of composition, which the extreme impressionists
and in the case of an exhibition held close upon ignored, or, at all events, defined in such a way
their return to London there must be something that anything on the face of the earth which could
different in its nature from exhibitions towards be pictured within the limits of a canvas was
which painters work through the long dark days of considered composition.

winter in their London studios, separated some- Whether this idea of how to make a picture was
times by many months from direct intimacy with brought to birth with the advent of the camera, or
nature, whose promptings come in a very thin whether the camera has since come fully into play
voice by the exhibitions of the spring. and partly killed it, no one can say—but of this

A society such as the
"Twenty-five" is not with-

politics of current art. In B
its formation one ma)- H"
look for something more
than the mere agreement
of twenty-five individual
painters to exhibit together

thing they have in com- y;

mon, though the group JHKk

and styles. An examina-
tion individually of the
aims of some of the mem-
bers, as apparent from
their work, was attempted
last year in these pages
when noticing their
second exhibition. In
dealing with the subject
then our consideration
was very largely given to
the figure-subject painters,
and it were well perhaps
on this occasion to devote
most of our space to the
landscape side of their
exhibition.

Last year we noted that
the landscape painters
who exhibited had, for
the most part, this trait

in common, a regard for « the back doorway " by w. lee hankey