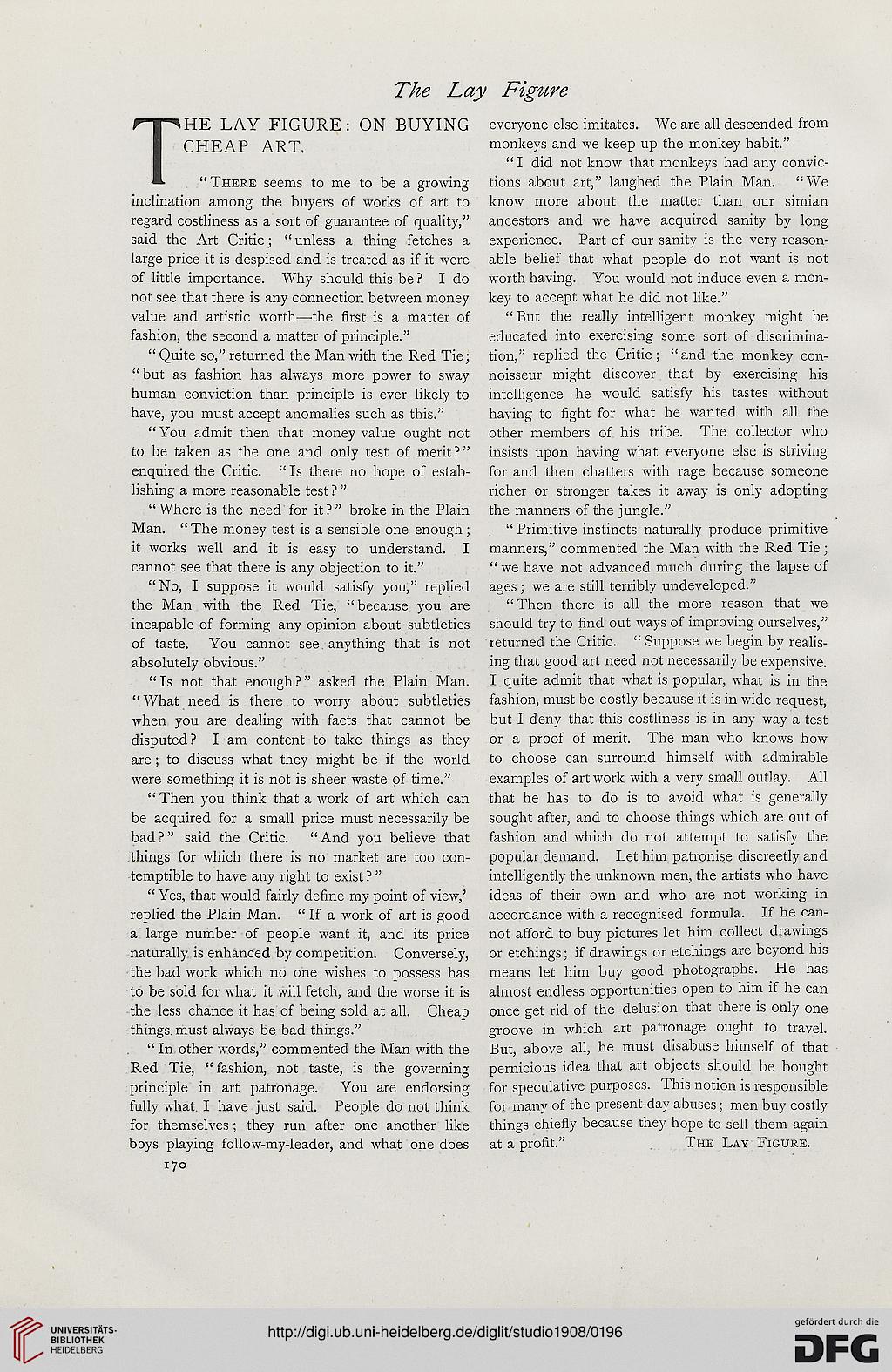 THE LAY FIGURE: ON BUYING
CHEAP ART,
"There seems to me to be a growing
inclination among the buyers of works of art to
regard costliness as a sort of guarantee of quality,"
said the Art Critic; " unless a thing fetches a
large price it is despised and is treated as if it were
of little importance. Why should this be ? I do
not see that there is any connection between money
value and artistic worth—the first is a matter of
fashion, the second a matter of principle."

" Quite so," returned the Man with the Red Tie;
"but as fashion has always more power to sway
human conviction than principle is ever likely to
have, you must accept anomalies such as this."

"You admit then that money value ought not
to be taken as the one and only test of merit?"
enquired the Critic. " Is there no hope of estab-
lishing a more reasonable test ? "

"Where is the need for it?" broke in the Plain
Man. " The money test is a sensible one enough;
it works well and it is easy to understand. I
cannot see that there is any objection to it."

"No, I suppose it would satisfy you," replied
the Man with the Red Tie, "because you are
incapable of forming any opinion about subtleties
of taste. You cannot see. anything that is not
absolutely obvious."

"Is not that enough?" asked the Plain Man.
"What need is there to worry about subtleties
when you are dealing with facts that cannot be
disputed? I am content to take things as they
are; to discuss what they might be if the world
were something it is not is sheer waste of time."

"Then you think that a work of art which can
be acquired for a small price must necessarily be
bad?" said the Critic. "And you believe that
things for which there is no market are too con-
temptible to have any right to exist ? "

"Yes, that would fairly define my point of view,'
replied the Plain Man. " If a work of art is good
a large number of people want it, and its price
naturally is enhanced by competition. Conversely,
the bad work which no one wishes to possess has
to be sold for what it will fetch, and the worse it is
the less chance it has of being sold at all. Cheap
things must always be bad things."

" In other words," commented the Man with the
Red Tie, " fashion, not taste, is the governing
principle in art patronage. You are endorsing
fully what. I have just said. People do not think
for themselves; they run after one another like
boys playing follow-my-leader, and what one does
170

everyone else imitates. We are all descended from
monkeys and we keep up the monkey habit."

"I did not know that monkeys had any convic-
tions about art," laughed the Plain Man. "We
know more about the matter than our simian
ancestors and we have acquired sanity by long
experience. Part of our sanity is the very reason-
able belief that what people do not want is not
worth having. You would not induce even a mon-
key to accept what he did not like."

"But the really intelligent monkey might be
educated into exercising some sort of discrimina-
tion," replied the Critic; "and the monkey con-
noisseur might discover that by exercising his
intelligence he would satisfy his tastes without
having to fight for what he wanted with all the
other members of his tribe. The collector who
insists upon having what everyone else is striving
for and then chatters with rage because someone
richer or stronger takes it away is only adopting
the manners of the jungle."

" Primitive instincts naturally produce primitive
manners," commented the Man with the Red Tie;
" we have not advanced much during the lapse of
ages ; we are still terribly undeveloped."

"Then there is all the more reason that we
should try to find out ways of improving ourselves,"
returned the Critic. " Suppose we begin by realis-
ing that good art need not necessarily be expensive.
I quite admit that what is popular, what is in the
fashion, must be costly because it is in wide request,
but I deny that this costliness is in any way a test
or a proof of merit. The man who knows how
to choose can surround himself with admirable
examples of art work with a very small outlay. All
that he has to do is to avoid what is generally
sought after, and to choose things which are out of
fashion and which do not attempt to satisfy the
popular demand. Let him patronise discreetly and
intelligently the unknown men, the artists who have
ideas of their own and who are not working in
accordance with a recognised formula. If he can-
not afford to buy pictures let him collect drawings
or etchings; if drawings or etchings are beyond his
means let him buy good photographs. He has
almost endless opportunities open to him if he can
once get rid of the delusion that there is only one
groove in which art patronage ought to travel.
But, above all, he must disabuse himself of that
pernicious idea that art objects should be bought
for speculative purposes. This notion is responsible
for many of the present-day abuses; men buy costly
things chiefly because they hope to sell them again
at a profit." The Lay Figure.