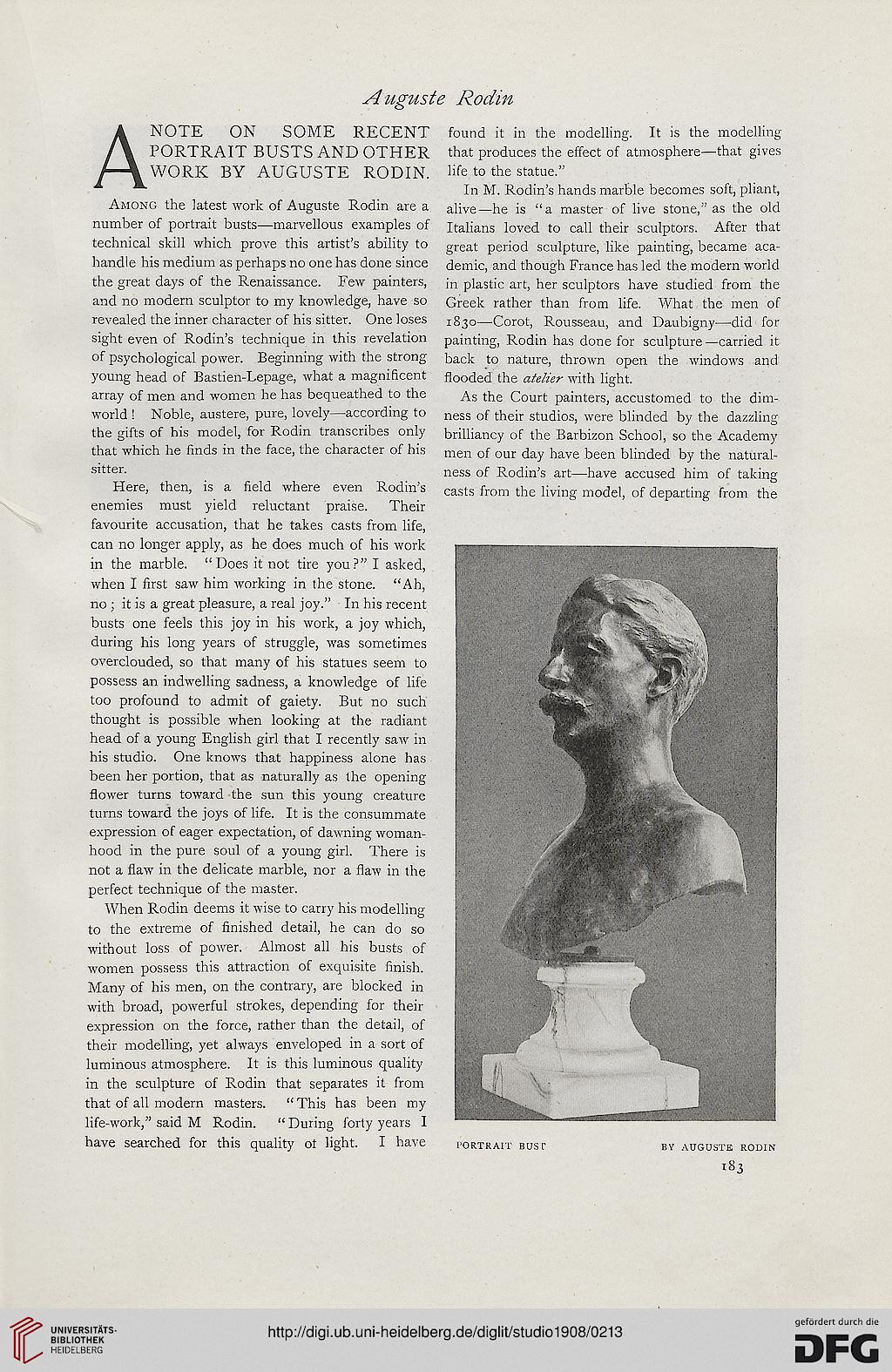 ANOTE ON SOME RECENT
PORTRAIT BUSTS AND OTHER
WORK BY AUGUSTE RODIN.

Among the latest work of Auguste Rodin are a
number of portrait busts—marvellous examples of
technical skill which prove this artist's ability to
handle his medium as perhaps no one has done since
the great days of the Renaissance. Few painters,
and no modern sculptor to my knowledge, have so
revealed the inner character of his sitter. One loses
sight even of Rodin's technique in this revelation
of psychological power. Beginning with the strong
young head of Bastien-Lepage, what a magnificent
array of men and women he has bequeathed to the
world ! Noble, austere, pure, lovely—according to
the gifts of his model, for Rodin transcribes only
that which he finds in the face, the character of his
sitter.

Here, then, is a field where even Rodin's
enemies must yield reluctant praise. Their
favourite accusation, that he takes casts from life,
can no longer apply, as he does much of his work
in the marble. "Does it not tire you?" I asked,
when I first saw him working in the stone. "Ah,
no ; it is a great pleasure, a real joy." In his recent
busts one feels this joy in his work, a joy which,
during his long years of struggle, was sometimes
overclouded, so that many of his statues seem to
possess an indwelling sadness, a knowledge of life
too profound to admit of gaiety. But no such
thought is possible when looking at the radiant
head of a young English girl that I recently saw in
his studio. One knows that happiness alone has
been her portion, that as naturally as the opening
flower turns toward the sun this young creature
turns toward the joys of life. It is the consummate
expression of eager expectation, of dawning woman-
hood in the pure soul of a young girl. There is
not a flaw in the delicate marble, nor a flaw in the
perfect technique of the master.

When Rodin deems it wise to carry his modelling
to the extreme of finished detail, he can do so
without loss of power. Almost all his busts of
women possess this attraction of exquisite finish.
Many of his men, on the contrary, are blocked in
with broad, powerful strokes, depending for their
expression on the force, rather than the detail, of
their modelling, yet always enveloped in a sort of
luminous atmosphere. It is this luminous quality
in the sculpture of Rodin that separates it from
that of all modern masters. " This has been my
life-work," said M Rodin. " During forty years I
have searched for this quality ot light. I have

found it in the modelling. It is the modelling
that produces the effect of atmosphere—that gives
life to the statue."

In M. Rodin's hands marble becomes soft, pliant,
alive—he is "a master of live stone," as the old
Italians loved to call their sculptors. After that
great period sculpture, like painting, became aca-
demic, and though France has led the modern world
in plastic art, her sculptors have studied from the
Greek rather than from life. What the men of
1830—Corot, Rousseau, and Daubigny—did for
painting, Rodin has done for sculpture —carried it
back to nature, thrown open the windows and
flooded the atelier with light.

As the Court painters, accustomed to the dim-
ness of their studios, were blinded by the dazzling
brilliancy of the Barbizon School, so the Academy
men of our day have been blinded by the natural-
ness of Rodin's art—have accused him of taking
casts from the living model, of departing from the