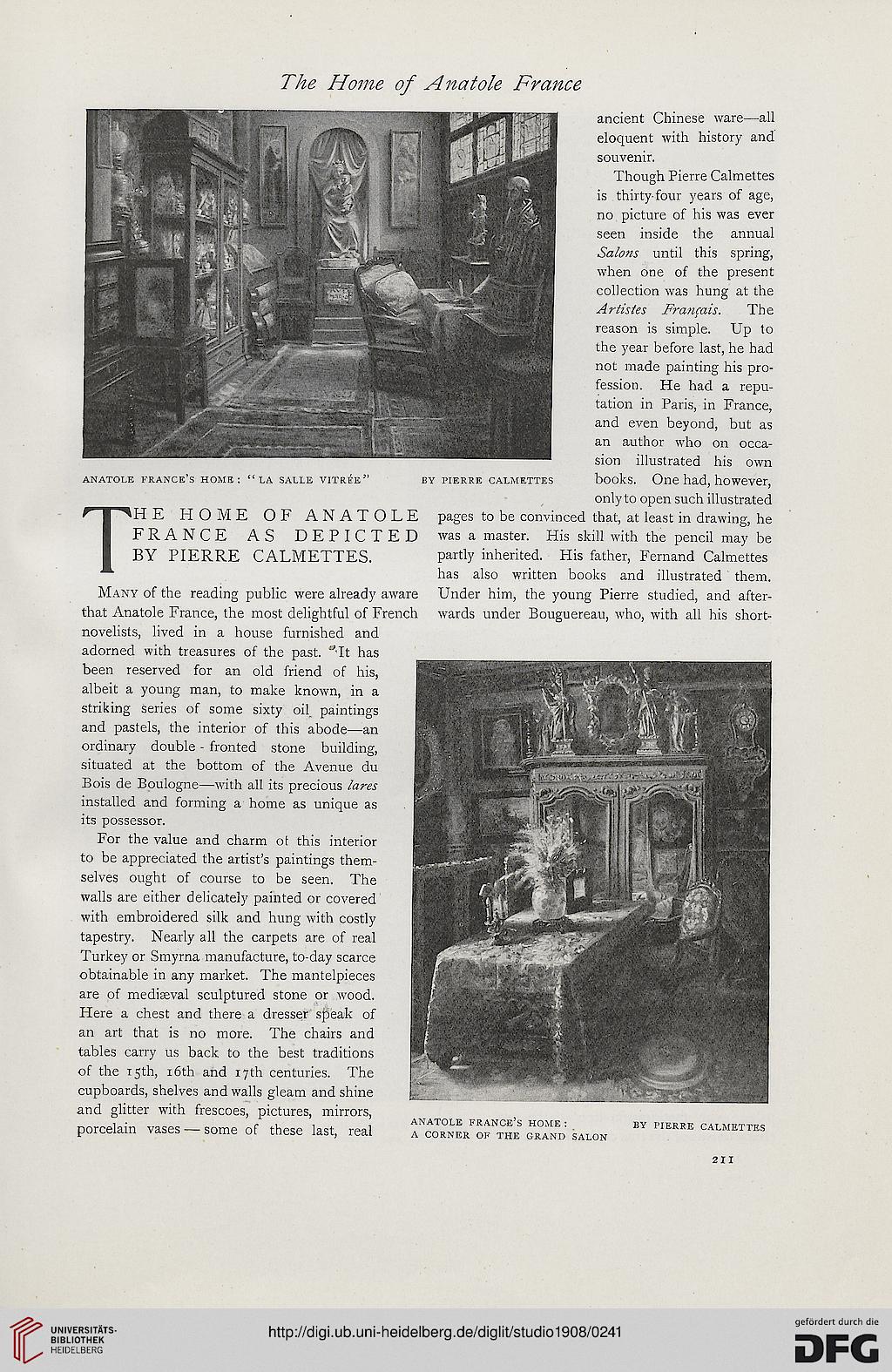 Information about OCR text
The Home of Anatole France

Though Pierre Calmettes
is thirty-four years of age,
no picture of his was ever
seen inside the annual
Salons until this spring,
when one of the present
collection was hung at the
Artistes Fran$ais. The
reason is simple. Up to
the year before last, he had
not made painting his pro-
fession. He had a repu-
tation in Paris, in France,
and even beyond, but as
an author who on occa-
sion illustrated his own

anatole france's home: "la salle vitree" by pierre calmettes books. One had, however,

only to open such illustrated

THE HOME OF ANATOLE pages to be convinced that, at least in drawing, he
FRANCE AS DEPICTED was a master. His skill with the pencil may be
BY PIERRE CALMETTES. partly inherited. His father, Fernand Calmettes

has also written books and illustrated them.
Many of the reading public were already aware Under him, the young Pierre studied, and after-
that Anatole France, the most delightful of French wards under Bouguereau, who, with all his short-
novelists, lived in a house furnished and
adorned with treasures of the past. "'It has
been reserved for an old friend of his,
albeit a young man, to make known, in a
striking series of some sixty oil paintings
and pastels, the interior of this abode—an
ordinary double - fronted stone building,
situated at the bottom of the Avenue du
Bois de Boulogne—with all its precious lares
installed and forming a home as unique as
its possessor.

For the value and charm ot this interior
to be appreciated the artist's paintings them-
selves ought of course to be seen. The
walls are either delicately painted or covered
with embroidered silk and hung with costly
tapestry. Nearly all the carpets are of real
Turkey or Smyrna manufacture, to-day scarce
obtainable in any market. The mantelpieces
are of mediaeval sculptured stone or wood.
Here a chest and there a dresser speak of
an art that is no more. The chairs and
tables carry us back to the best traditions
of the 15th, 16th and 17th centuries. The
cupboards, shelves and walls gleam and shine
and glitter with frescoes, pictures, mirrors,

porcelain vases — some of these last, real a corner of the grand salon