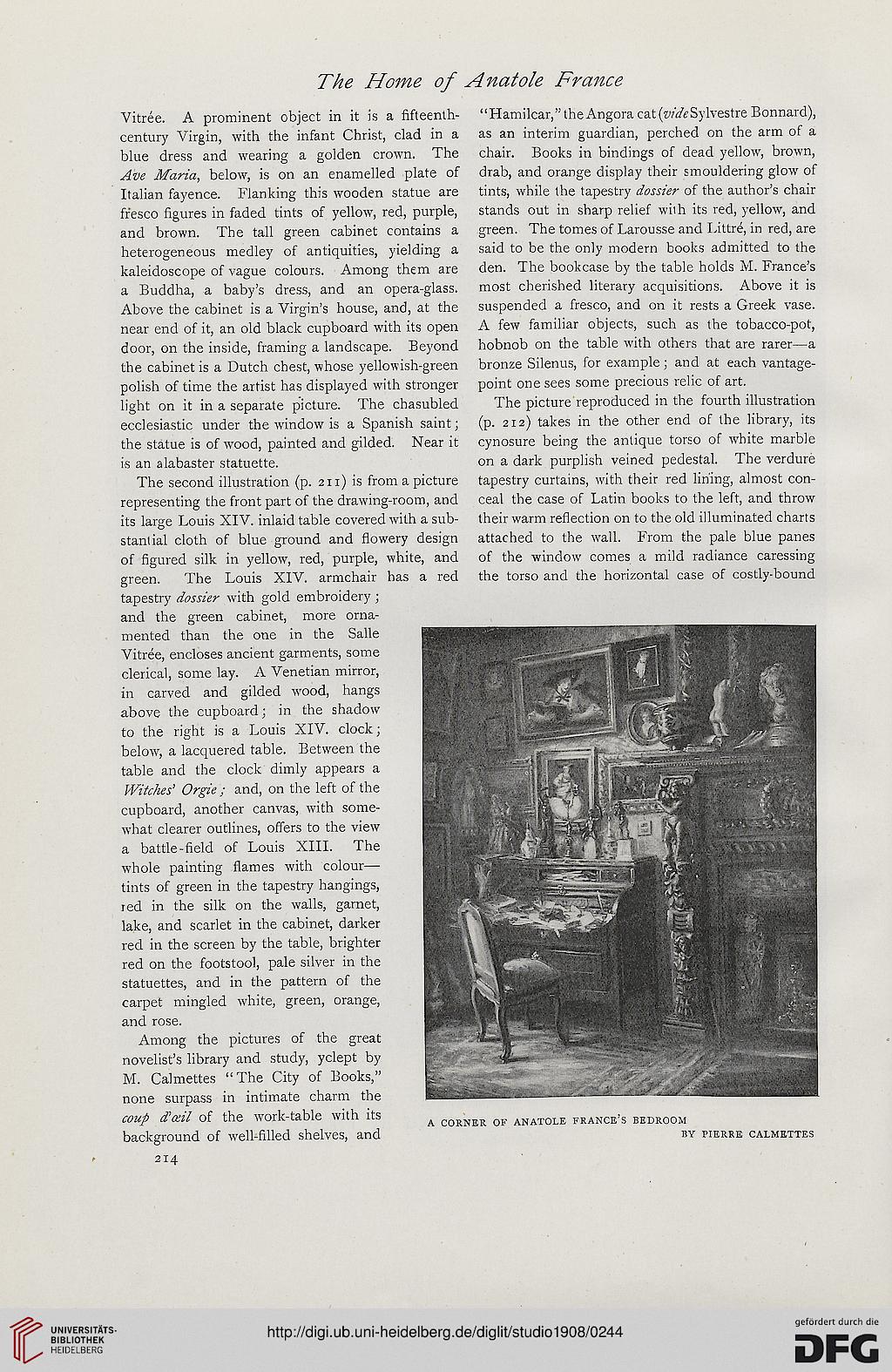 Information about OCR text
The Home of Anatole France

Vitree. A prominent object in it is a fifteenth- "Hamilcar,"the Angora cat(w'<ftSylvestre Bonnard),
century Virgin, with the infant Christ, clad in a as an interim guardian, perched on the arm of a
blue dress and wearing a golden crown. The chair. Books in bindings of dead yellow, brown,
Ave Maria, below, is on an enamelled plate of drab, and orange display their smouldering glow of
Italian fayence. Flanking this wooden statue are tints, while the tapestry dossier of the author's chair
fresco figures in faded tints of yellow, red, purple, stands out in sharp relief with its red, yellow, and
and brown. The tall green cabinet contains a green. The tomes of Larousse and Littre, in red, are
heterogeneous medley of antiquities, yielding a said to be the only modern books admitted to the
kaleidoscope of vague colours. Among them are den. The bookcase by the table holds M. France's
a Buddha, a baby's dress, and an opera-glass. most cherished literary acquisitions. Above it is
Above the cabinet is a Virgin's house, and, at the suspended a fresco, and on it rests a Greek vase,
near end of it, an old black cupboard with its open A few familiar objects, such as the tobacco-pot,
door, on the inside, framing a landscape. Beyond hobnob on the table with others that are rarer—a
the cabinet is a Dutch chest, whose yellowish-green bronze Silenus, for example ; and at each vantage-
polish of time the artist has displayed with stronger point one sees some precious relic of art.
light on it in a separate picture. The chasubled The picture reproduced in the fourth illustration
ecclesiastic under the window is a Spanish saint; (p. 212) takes in the other end of the library, its
the statue is of wood, painted and gilded. Near it cynosure being the antique torso of white marble
is an alabaster statuette. on a dark purplish veined pedestal. The verdure

The second illustration (p. 211) is from a picture tapestry curtains, with their red lining, almost con-
representing the front part of the drawmg-room, and ceal the case of Latin books to the left, and throw
its large Louis XIV. inlaid table covered with a sub- their warm reflection on to the old illuminated charts
stantial cloth of blue ground and flowery design attached to the wall. From the pale blue panes
of figured silk in yellow, red, purple, white, and of the window comes a mild radiance caressing
green. The Louis XIV. armchair has a red the torso and the horizontal case of costly-bound
tapestry dossier with gold embroidery ;
and the green cabinet, more orna-
mented than the one in the Salle
Vitree, encloses ancient garments, some
clerical, some lay. A Venetian mirror,
in carved and gilded wood, hangs
above the cupboard; in the shadow
to the right is a Louis XIV. clock;
below, a lacquered table. Between the
table and the clock dimly appears a
Witches' Orgie; and, on the left of the
cupboard, another canvas, with some-
what clearer outlines, offers to the view
a battle-field of Louis XIII. The
whole painting flames with colour—
tints of green in the tapestry hangings,
led in the silk on the walls, garnet,
lake, and scarlet in the cabinet, darker
red in the screen by the table, brighter
red on the footstool, pale silver in the
statuettes, and in the pattern of the
carpet mingled white, green, orange,
and rose.

Among the pictures of the great
novelist's library and study, yclept by
M. Calmettes "The City of Books,"
none surpass in intimate charm the
coup d'aiil of the work-table with its a cqrner qf anatole france's bedr00m

background of well-filled shelves, and by pierre calmettes