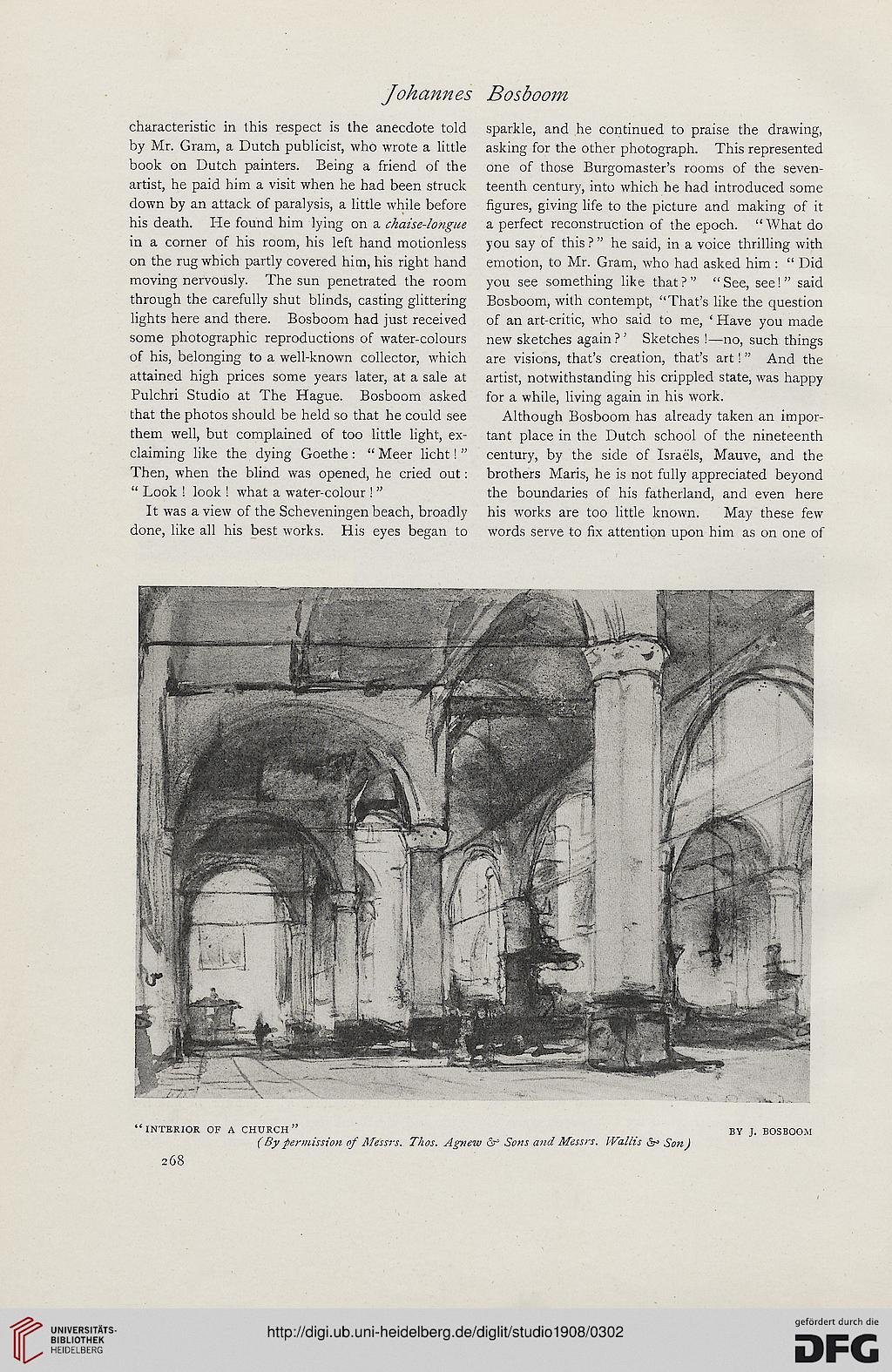 characteristic in this respect is the anecdote told
by Mr. Gram, a Dutch publicist, who wrote a little
book on Dutch painters. Being a friend of the
artist, he paid him a visit when he had been struck
down by an attack of paralysis, a little while before
his death. He found him lying on a chaise-longue
in a corner of his room, his left hand motionless
on the rug which partly covered him, his right hand
moving nervously. The sun penetrated the room
through the carefully shut blinds, casting glittering
lights here and there. Bosboom had just received
some photographic reproductions of water-colours
of his, belonging to a well-known collector, which
attained high prices some years later, at a sale at
Pulchri Studio at The Hague. Bosboom asked
that the photos should be held so that he could see
them well, but complained of too little light, ex-
claiming like the dying Goethe : " Meer licht! "
Then, when the blind was opened, he cried out:
" Look ! look ! what a water-colour ! "

It was a view of the Scheveningen beach, broadly
done, like all his best works. His eyes began to

sparkle, and he continued to praise the drawing,
asking for the other photograph. This represented
one of those Burgomaster's rooms of the seven-
teenth century, into which he had introduced some
figures, giving life to the picture and making of it
a perfect reconstruction of the epoch. "What do
you say of this ? " he said, in a voice thrilling with
emotion, to Mr. Gram, who had asked him : " Did
you see something like that?" "See, see!" said
Bosboom, with contempt, "That's like the question
of an art-critic, who said to me, ' Have you made
new sketches again ? ' Sketches !—no, such things
are visions, that's creation, that's art!" And the
artist, notwithstanding his crippled state, was happy
for a while, living again in his work.

Although Bosboom has already taken an impor-
tant place in the Dutch school of the nineteenth
century, by the side of Israels, Mauve, and the
brothers Maris, he is not fully appreciated beyond
the boundaries of his fatherland, and even here
his works are too little known. May these few
words serve to fix attention upon him as on one of