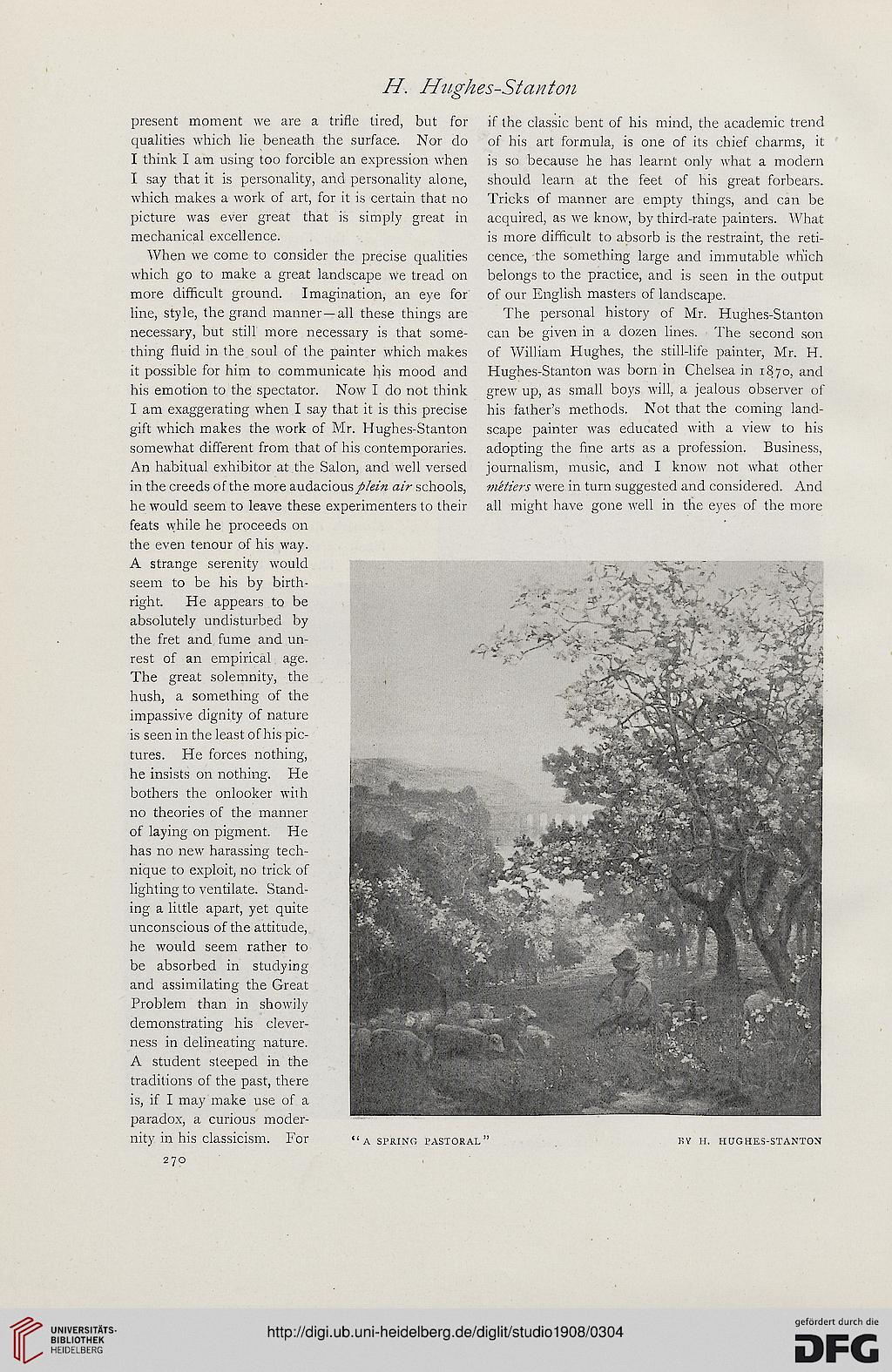 present moment we are a trifle tired, but for if the classic bent of his mind, the academic trend
qualities which lie beneath the surface. Nor do of his art formula, is one of its chief charms, it
I think I am using too forcible an expression when is so because he has learnt only what a modern
I say that it is personality, and personality alone, should learn at the feet of his great forbears,
which makes a work of art, for it is certain that no Tricks of manner are empty things, and can be
picture was ever great that is simply great in acquired, as we know, by third-rate painters. What
mechanical excellence. is more difficult to absorb is the restraint, the reti-

When we come to consider the precise qualities cence, the something large and immutable which
which go to make a great landscape we tread on belongs to the practice, and is seen in the output
more difficult ground. Imagination, an eye for of our English masters of landscape,
line, style, the grand manner—all these things are The personal history of Mr. Hughes-Stanton
necessary, but still more necessary is that some- can be given in a dozen lines. The second son
thing fluid in the soul of the painter which makes of William Hughes, the still-life painter, Mr. H.
it possible for him to communicate his mood and Hughes-Stanton was born in Chelsea in 1870, and
his emotion to the spectator. Now I do not think grew up, as small boys will, a jealous observer of
I am exaggerating when I say that it is this precise his father's methods. Not that the coming land-
gift which makes the work of Mr. Hughes-Stanton scape painter was educated with a view to his
somewhat different from that of his contemporaries, adopting the fine arts as a profession. Business,
An habitual exhibitor at the Salon, and well versed journalism, music, and I know not what other
in the creeds of the more audaciousplein air schools, metiers were in turn suggested and considered. And
he would seem to leave these experimenters to their all might have gone well in the eyes of the more
feats while he proceeds on
the even tenour of his way.
A strange serenity would
seem to be his by birth-
right. He appears to be
absolutely undisturbed by
the fret and fume and un-
rest of an empirical age.
The great solemnity, the
hush, a something of the
impassive dignity of nature
is seen in the least of his pic-
tures. He forces nothing,
he insists on nothing. He
bothers the onlooker with
no theories of the manner
of laying on pigment. He
has no new harassing tech-
nique to exploit, no trick of
lighting to ventilate. Stand-
ing a little apart, yet quite
unconscious of the attitude,
he would seem rather to
be absorbed in studying
and assimilating the Great
Problem than in showily
demonstrating his clever-
ness in delineating nature.
A student steeped in the
traditions of the past, there
is, if I may make use of a
paradox, a curious moder-
nity in his classicism. For " A SPRING PASTORAL" EY H. HUGHES-STANTON
270