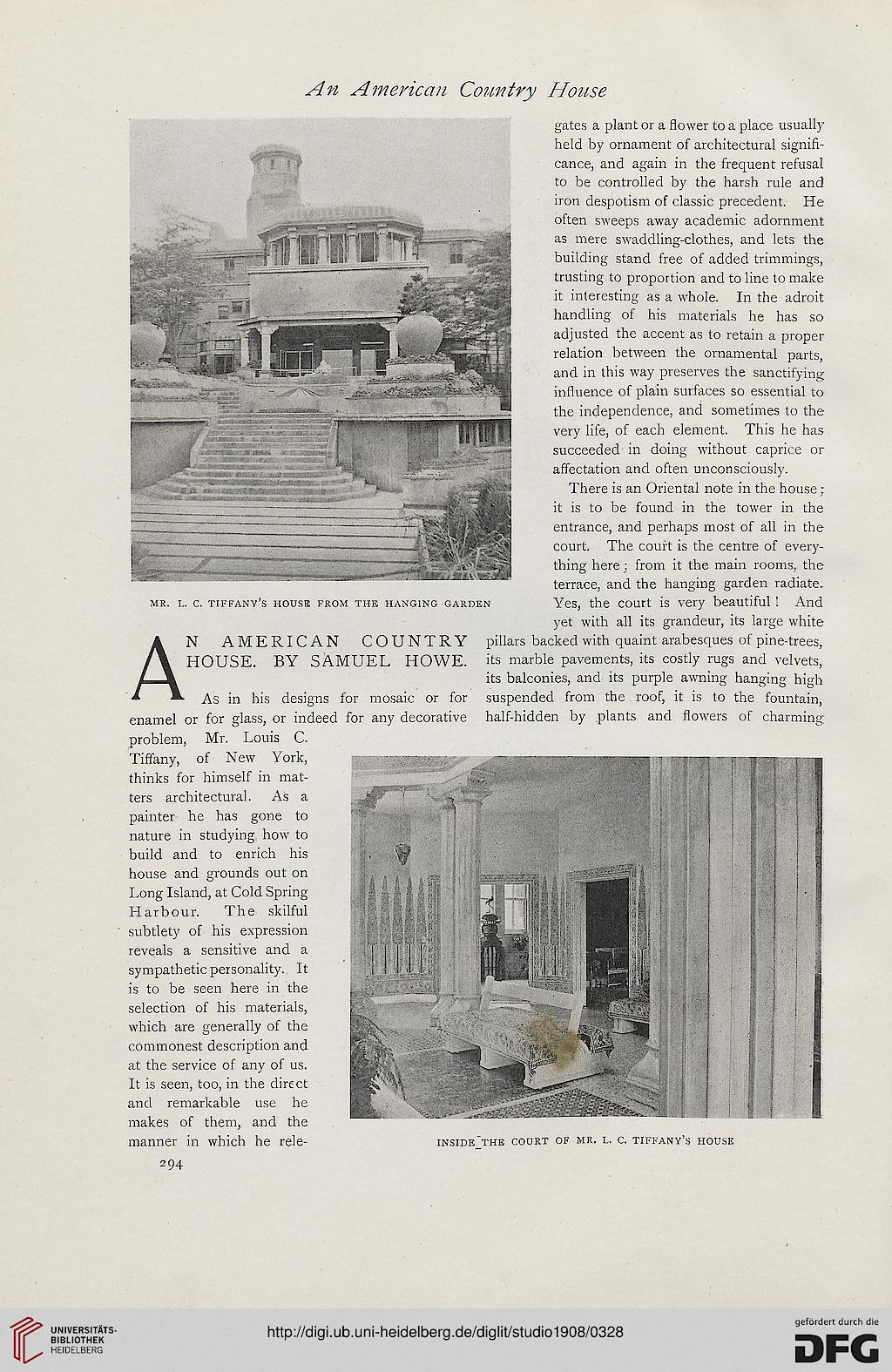 gates a plant or a flower to a place usually-
held by ornament of architectural signifi-
cance, and again in the frequent refusal
to be controlled by the harsh rule and
iron despotism of classic precedent. He
often sweeps away academic adornment
as mere swaddling-clothes, and lets the
building stand free of added trimmings,
trusting to proportion and to line to make
it interesting as a whole. In the adroit
handling of his materials he has so
•j adjusted the accent as to retain a proper

relation between the ornamental parts,
and in this way preserves the sanctifying
influence of plain surfaces so essential to
the independence, and sometimes to the
very life, of each element. This he has
succeeded in doing without caprice or
affectation and often unconsciously.

There is an Oriental note in the house ;
it is to be found in the tower in the
entrance, and perhaps most of all in the
court. The court is the centre of every-
thing here; from it the main rooms, the
terrace, and the hanging garden radiate.
mr. l. c. tiffany's housk from the hanging garden Yes, the court is very beautiful ! And

yet with all its grandeur, its large white

AN AMERICAN COUNTRY pillars backed with quaint arabesques of pine-trees,
HOUSE. BY SAMUEL HOWE, its marble pavements, its costly rugs and velvets,
its balconies, and its purple awning hanging high
As in his designs for mosaic or for suspended from the roof, it is to the fountain,
enamel or for glass, or indeed for any decorative half-hidden by plants and flowers of charming
problem, Mr. Louis C.
Tiffany, of New York,
thinks for himself in mat-
ters architectural. As a
painter he has gone to
nature in studying how to
build and to enrich his
house and grounds out on
Long Island, at Cold Spring
Harbour. The skilful
subtlety of his expression
reveals a sensitive and a
sympathetic personality. It
is to be seen here in the
selection of his materials,
which are generally of the
commonest description and
at the service of any of us.
It is seen, too, in the direct
and remarkable use he
makes of them, and the

manner in which he rele- inside "the court of mr. l. c. tiffany's house