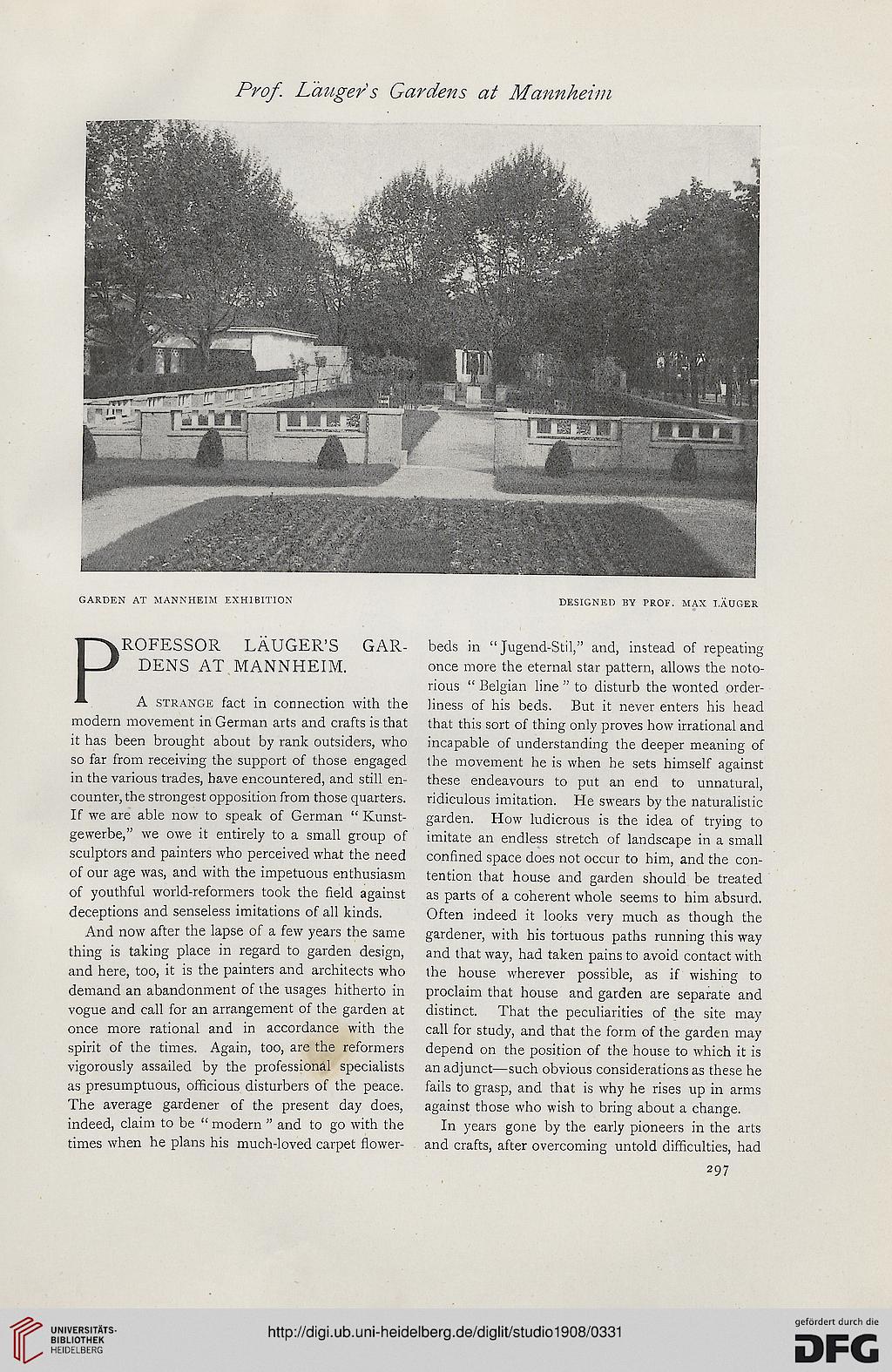 GARDEN AT MANNHEIM EXHIBITION DESIGNED BY PROF. MAX I .AUGER

PROFESSOR LAUGER'S GAR- beds in " Jugend-Stil," and, instead of repeating

DENS AT MANNHEIM. once more the eternal star pattern, allows the noto-
rious " Belgian line " to disturb the wonted order-

A strange fact in connection with the liness of his beds. But it never enters his head

it has been brought about by rank outsiders, who incapable of understanding the deeper meaning of

in the various trades, have encountered, and still en- these endeavours to put an end to unnatural,

counter, the strongest opposition from those quarters. ridiculous imitation. He swears by the naturalistic

If we are able now to speak of German " Kunst- garden. How ludicrous is the idea of trying to

gewerbe," we owe it entirely to a small group of imitate an endless stretch of landscape in a small

sculptors and painters who perceived what the need confined space does not occur to him, and the con-

of our age was, and with the impetuous enthusiasm tention that house and garden should be treated

of youthful world-reformers took the field against as parts of a coherent whole seems to him absurd,

deceptions and senseless imitations of all kinds. Often indeed it looks very much as though the

And now after the lapse of a few years the same gardener, with his tortuous paths running this way

thing is taking place in regard to garden design, and that way, had taken pains to avoid contact with

and here, too, it is the painters and architects who the house wherever possible, as if wishing to

vogue and call for an arrangement of the garden at distinct. That the peculiarities of the site may

once more rational and in accordance with the call for study, and that the form of the garden may

spirit of the times. Again, too, are the reformers depend on the position of the house to which it is

as presumptuous, officious disturbers of the peace. fails to grasp, and that is why he rises up in arms

The average gardener of the present day does, against those who wish to bring about a change,
indeed, claim to be " modern " and to go with the In years gone by the early pioneers in the arts

times when he plans his much-loved carpet flower- and crafts, after overcoming untold difficulties, had