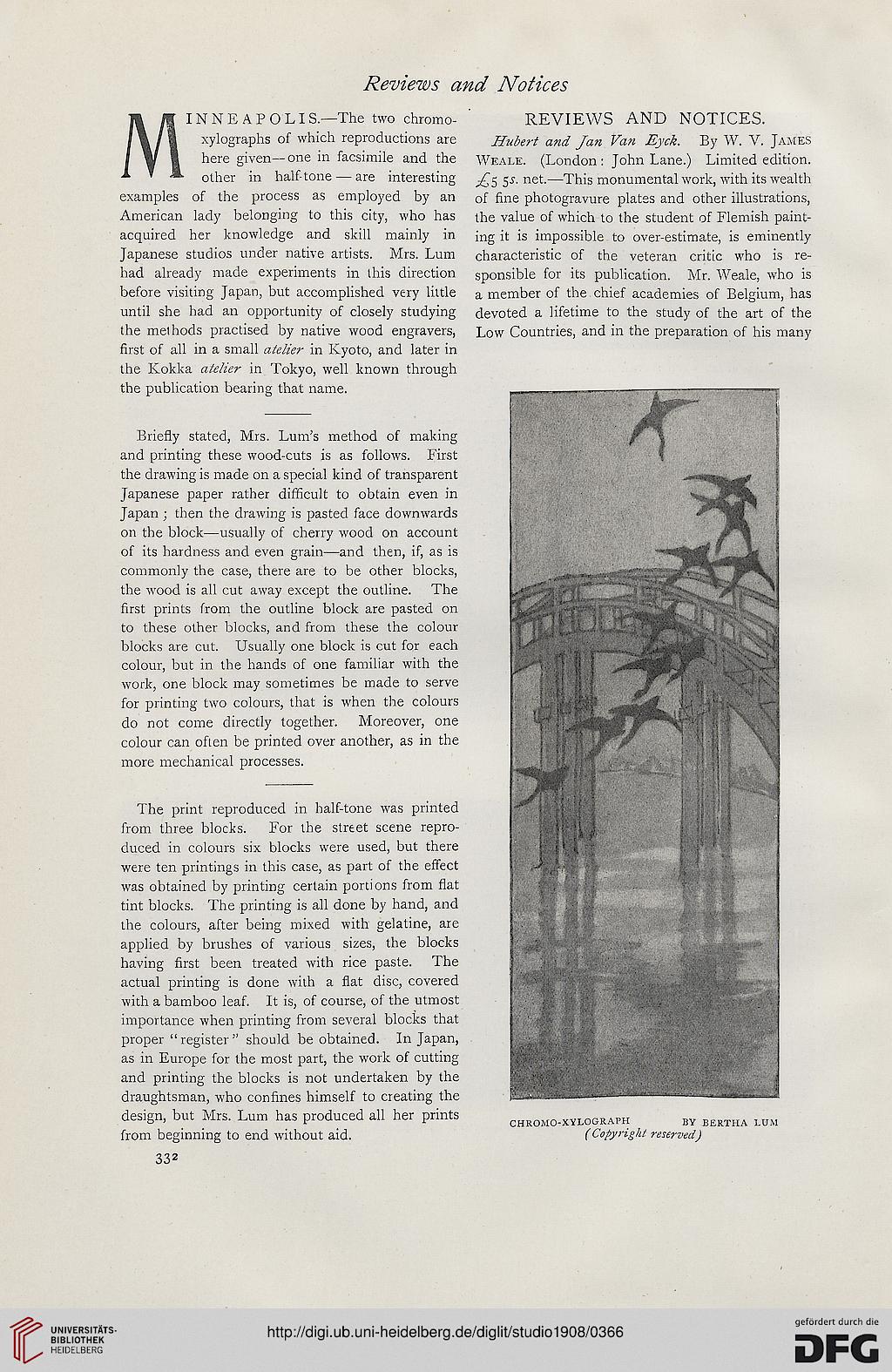 MINNEAPOLI S.—The two chromo-
xylographs of which reproductions are
here given—one in facsimile and the
other in halftone — are interesting
examples of the process as employed by an
American lady belonging to this city, who has
acquired her knowledge and skill mainly in
Japanese studios under native artists. Mrs. Lum
had already made experiments in this direction
before visiting Japan, but accomplished very little
until she had an opportunity of closely studying
the methods practised by native wood engravers,
first of all in a small atelier in Kyoto, and later in
the Kokka atelier in Tokyo, well known through
the publication bearing that name.

Briefly stated, Mrs. Lum's method of making
and printing these wood-cuts is as follows. First
the drawing is made on a special kind of transparent
Japanese paper rather difficult to obtain even in
Japan ; then the drawing is pasted face downwards
on the block—usually of cherry wood on account
of its hardness and even grain—and then, if, as is
commonly the case, there are to be other blocks,
the wood is all cut away except the outline. The
first prints from the outline block are pasted on
to these other blocks, and from these the colour
blocks are cut. Usually one block is cut for each
colour, but in the hands of one familiar with the
work, one block may sometimes be made to serve
for printing two colours, that is when the colours
do not come directly together. Moreover, one
colour can often be printed over another, as in the
more mechanical processes.

The print reproduced in half-tone was printed
from three blocks. For the street scene repro-
duced in colours six blocks were used, but there
were ten printings in this case, as part of the effect
was obtained by printing certain portions from flat
tint blocks. The printing is all done by hand, and
the colours, after being mixed with gelatine, are
applied by brushes of various sizes, the blocks
having first been treated with rice paste. The
actual printing is done with a flat disc, covered
with a bamboo leaf. It is, of course, of the utmost
importance when printing from several blocks that
proper " register " should be obtained. In Japan,
as in Europe for the most part, the work of cutting
and printing the blocks is not undertaken by the
draughtsman, who confines himself to creating the
design, but Mrs. Lum has produced all her prints
from beginning to end without aid.

55. net.—This monumental work, with its wealth
of fine photogravure plates and other illustrations,
the value of which to the student of Flemish paint-
ing it is impossible to over-estimate, is eminently
characteristic of the veteran critic who is re-
sponsible for its publication. Mr. Weale, who is
a member of the chief academies of Belgium, has
devoted a lifetime to the study of the art of the
Low Countries, and in the preparation of his many