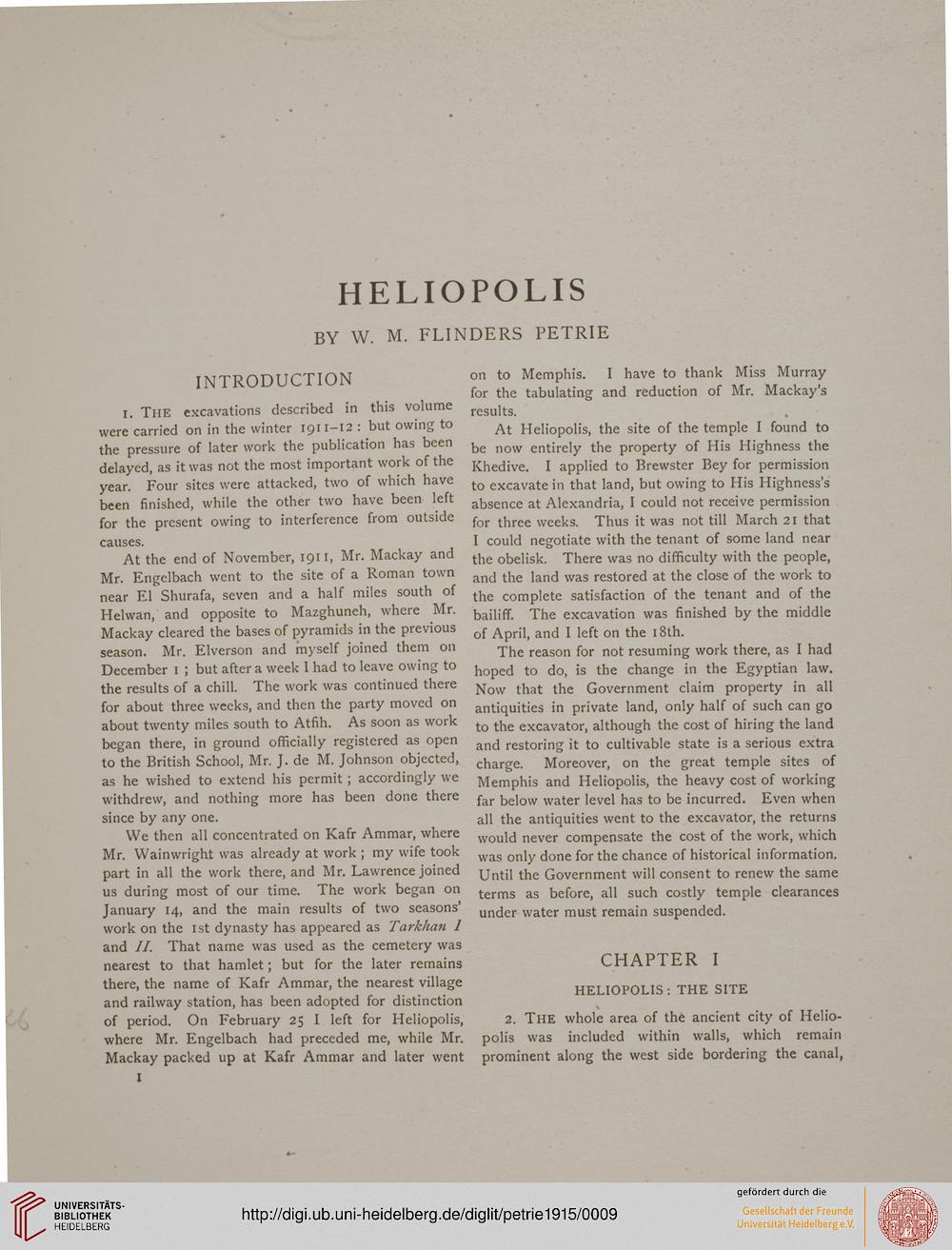 r. The excavations described in this volume
were carried on in the winter 1911-12 : but owing to
the pressure of later work the publication has been
delayed, as it was not the most important work of the
year. Four sites were attacked, two of which have
been finished, while the other two have been left
for the present owing to interference from outside
causes.

At the end of November, 1911, Mr. Mackay and
Mr. Engclbach went to the site of a Roman town
near El Shurafa, seven and a half miles south of
Helwan, and opposite to Mazghuneh, where Mr.
Mackay cleared the bases of pyramids in the previous
season. Mr. Elverson and myself joined them on
December 1 ; but after a week I had to leave owing to
the results of a chill. The work was continued there
for about three weeks, and then the party moved on
about twenty miles south to Atfih. As soon as work
began there, in ground officially registered as open
to the British School, Mr. J. de M. Johnson objected,
as he wished to extend his permit ; accordingly we
withdrew, and nothing more has been done there
since by any one.

We then all concentrated on Kafr Ammar, where
Mr. Wainwright was already at work ; my wife took
part in all the work there, and Mr. Lawrence joined
us during most of our time. The work began on
January 14, and the main results of two seasons'
work on the 1st dynasty has appeared as Tarkkan 1
and //. That name was used as the cemetery was
nearest to that hamlet; but for the later remains
there, the name of Kafr Ammar, the nearest village
and railway station, has been adopted for distinction
of period. On February 25 I left for Heliopolis,
where Mr. Engelbach had preceded me, while Mr.
Mackay packed up at Kafr Ammar and later went

on to Memphis. I have to thank Miss Murray
for the tabulating and reduction of Mr. Mackay's
results.

At Heliopolis, the site of the temple I found to
be now entirely the property of His Highness the
Khedive. I applied to Brewster Bey for permission
to excavate in that land, but owing to His Highness's
absence at Alexandria, I could not receive permission
for three weeks. Thus it was not till March 21 that
I could negotiate with the tenant of some land near
the obelisk. There was no difficulty with the people,
and the land was restored at the close of the work to
the complete satisfaction of the tenant and of the
bailiff. The excavation was finished by the middle
of April, and I left on the 18th.

The reason for not resuming work there, as I had
hoped to do, is the change in the Egyptian law.
Now that the Government claim property in all
antiquities in private land, only half of such can go
to the excavator, although the cost of hiring the land
and restoring it to cultivable state is a serious extra
charge. Moreover, on the great temple sites of
Memphis and Heliopolis, the heavy cost of working
far below water level has to be incurred. Even when
all the antiquities went to the excavator, the returns
would never compensate the cost of the work, which
was only done for the chance of historical information.
Until the Government will consent to renew the same
terms as before, all such costly temple clearances
under water must remain suspended.

2. The whole area of the ancient city of Helio-
polis was included within walls, which remain
prominent along the west side bordering the canal,