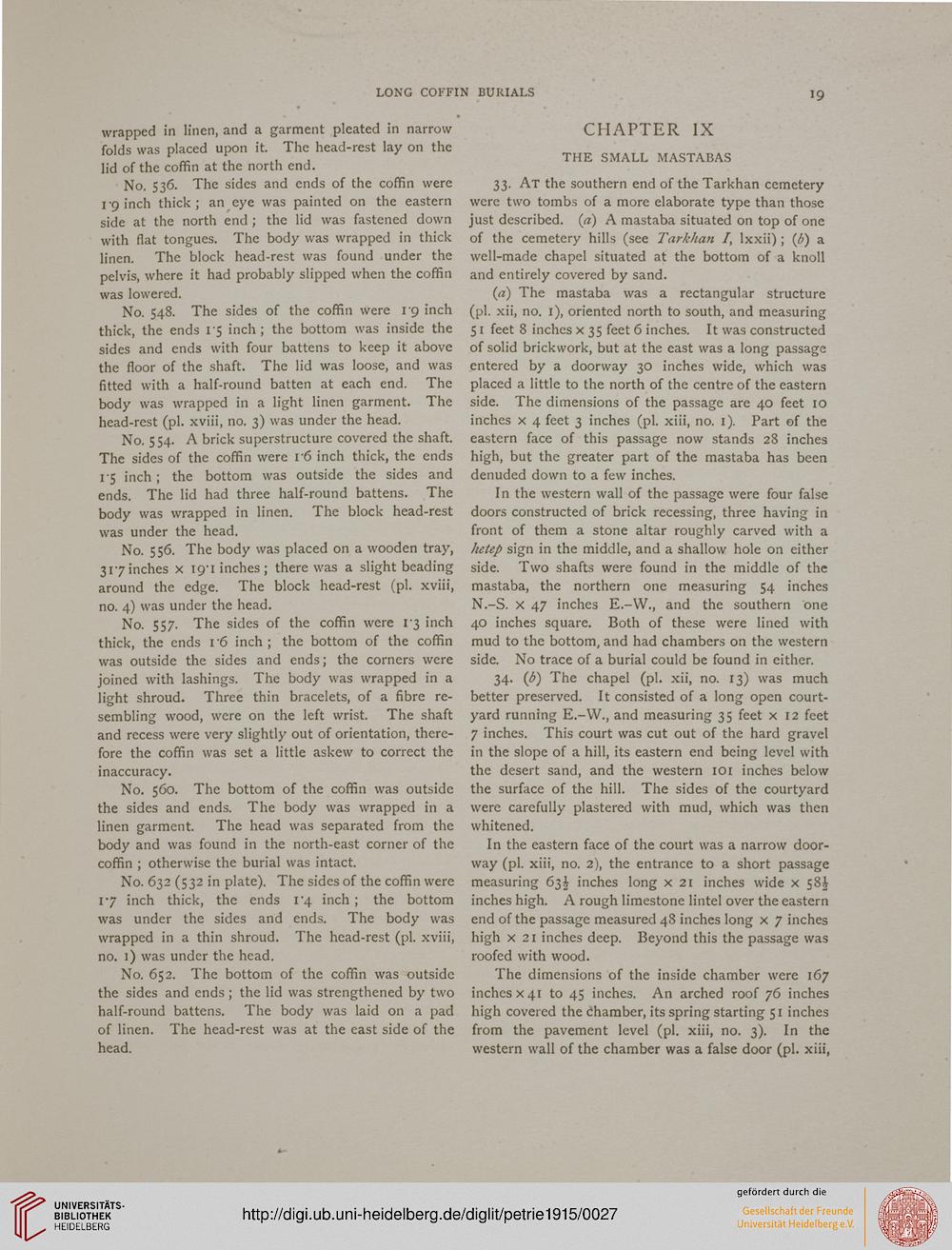 wrapped in linen, and a garment pleated in narrow
folds was placed upon it. The head-rest lay on the
lid of the coffin at the north end.

No. 536\ The sides and ends of the coffin were
1-9 inch thick; an eye was painted on the eastern
side at the north end ; the lid was fastened down
with flat tongues. The body was wrapped in thick
linen. The block head-rest was found under the
pelvis, where it had probably slipped when the coffin
was lowered.

No. 548. The sides of the coffin were rg inch
thick, the ends I-5 inch; the bottom was inside the
sides and ends with four battens to keep it above
the floor of the shaft. The lid was loose, and was
fitted with a half-round batten at each end. The
body was wrapped in a light linen garment. The
head-rest (pi. xviii, no. 3) was under the head.

No. 554. A brick superstructure covered the shaft.
The sides of the coffin were r6 inch thick, the ends
1-5 inch; the bottom was outside the sides and
ends. The lid had three half-round battens. The
body was wrapped in linen. The block head-rest
was under the head.

No. 557- The sides of the coffin were i"3 inch
thick, the ends i'6 inch; the bottom of the coffin
was outside the sides and ends; the corners were
joined with lashings. The body was wrapped in a
light shroud. Three thin bracelets, of a fibre re-
sembling wood, were on the left wrist. The shaft
and recess were very slightly out of orientation, there-
fore the coffin was set a little askew to correct the
inaccuracy.

No. 560. The bottom of the coffin was outside
the sides and ends. The body was wrapped in a
linen garment. The head was separated from the
body and was found in the north-east corner of the
coffin ; otherwise the burial was intact.

No. 652. The bottom of the coffin was outside
the sides and ends ; the lid was strengthened by two
half-round battens. The body was laid on a pad
of linen. The head-rest was at the cast side of the
head.

33. At the southern end of the Tarkhan cemetery
were two tombs of a more elaborate type than those
just described, (a) A mastaba situated on top of one
of the cemetery hills (see Tarkhan I, lxxii) ; (£) a
well-made chapel situated at the bottom of a knoll
and entirely covered by sand.

(a) The mastaba was a rectangular structure
(pi. xii, no. 1), oriented north to south, and measuring
5t feet 8 inches x 35 feet 6 inches. It was constructed
of solid brickwork, but at the cast was a long passage
entered by a doorway 30 inches wide, which was
placed a little to the north of the centre of the eastern
side. The dimensions of the passage are 40 feet ro
inches x 4 feet 3 inches (pi. xiii, no. 1). Part of the
eastern face of this passage now stands 28 inches
high, but the greater part of the mastaba has been
denuded down to a few inches.

In the western wall of the passage were four false
doors constructed of brick recessing, three having in
front of them a stone altar roughly carved with a
hetep sign in the middle, and a shallow hole on either
side. Two shafts were found in the middle of the
mastaba, the northern one measuring 54 inches
N.-S. x 47 inches E.-W., and the southern one
40 inches square. Both of these were lined with
mud to the bottom, and had chambers on the western
side. No trace of a burial could be found in either.

34. (b) The chapel (pi. xii, no. 13) was much
better preserved. It consisted of a long open court-
yard running E.-W., and measuring 35 feet x 12 feet
7 inches. This court was cut out of the hard gravel
in the slope of a hill, its eastern end being level with
the desert sand, and the western 101 inches below
the surface of the hill. The sides of the courtyard
were carefully plastered with mud, which was then
whitened.

The dimensions of the inside chamber were 167
inches x 41 to 45 inches. An arched roof 76 inches
high covered the chamber, its spring starting 51 inches
from the pavement level (pi. xiii, no. 3). In the
western wall of the chamber was a false door (pi. xiii,