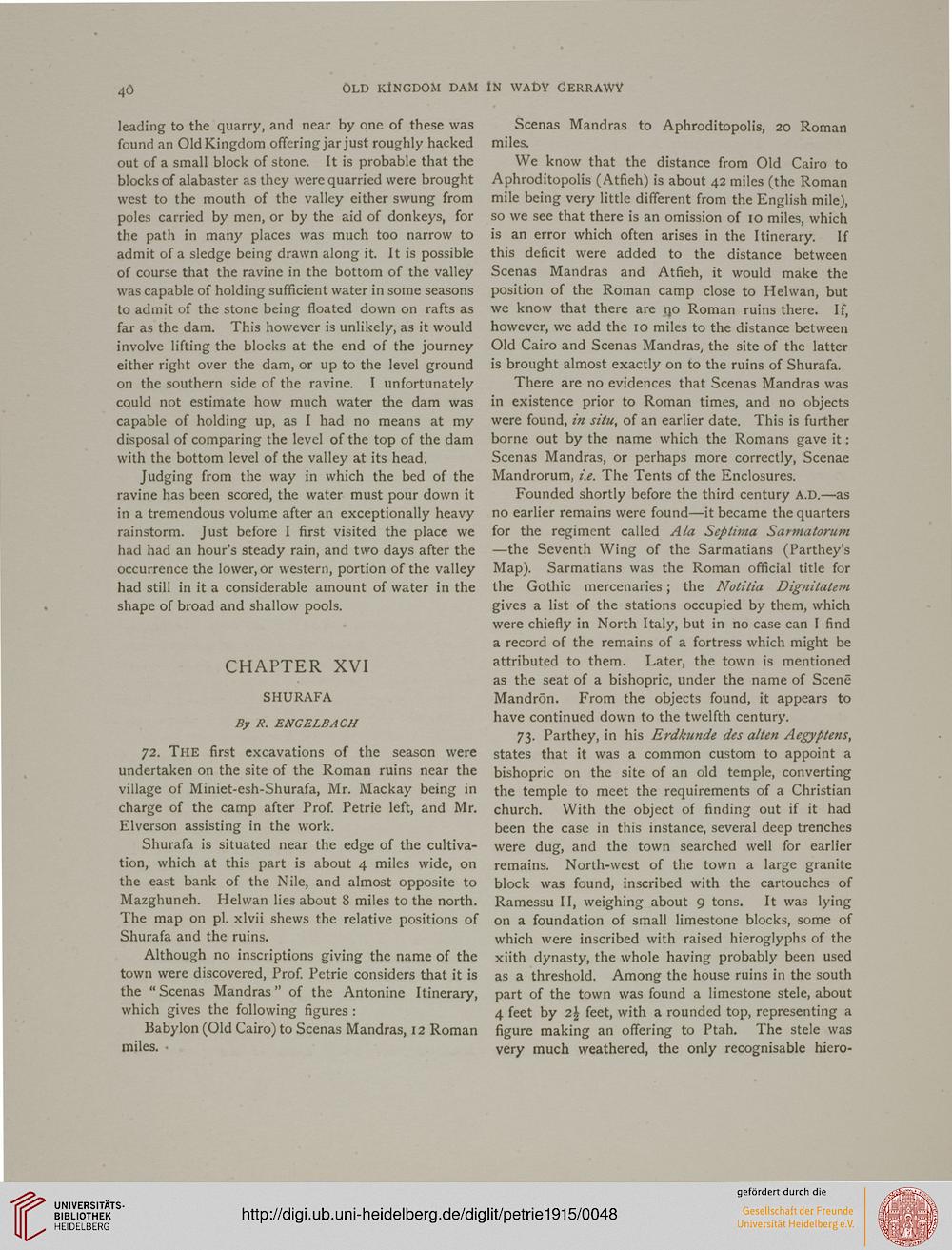 leading to the quarry, and near by one of these was
found an Old Kingdom offering jar just roughly hacked
out of a small block of stone. It is probable that the
blocks of alabaster as they were quarried were brought
west to the mouth of the valley either swung from
poles carried by men, or by the aid of donkeys, for
the path in many places was much too narrow to
admit of a sledge being drawn along it. It is possible
of course that the ravine in the bottom of the valley
was capable of holding sufficient water in some seasons
to admit of the stone being floated down on rafts as
far as the dam. This however is unlikely, as it would
involve lifting the blocks at the end of the journey
either right over the dam, or up to the level ground
on the southern side of the ravine. I unfortunately
could not estimate how much water the dam was
capable of holding up, as I had no means at my
disposal of comparing the level of the top of the dam
with the bottom level of the valley at its head.

Judging from the way in which the bed of the
ravine has been scored, the water must pour down it
in a tremendous volume after an exceptionally heavy
rainstorm. Just before I first visited the place we
had had an hour's steady rain, and two days after the
occurrence the lower, or western, portion of the valley
had still in it a considerable amount of water in the
shape of broad and shallow pools.

72. The first excavations of the season were
undertaken on the site of the Roman ruins near the
village of Miniet-esh-Shurafa, Mr. Mackay being in
charge of the camp after Prof. Petrie left, and Mr.
Elverson assisting in the work.

Shurafa is situated near the edge of the cultiva-
tion, which at this part is about 4 miles wide, on
the east bank of the Nile, and almost opposite to
Mazghuneh. Helwan lies about 8 miles to the north.
The map on pi. xlvii shews the relative positions of
Shurafa and the ruins.

Although no inscriptions giving the name of the
town were discovered, Prof. Petrie considers that it is
the "Scenas Mandras" of the Antonine Itinerary,
which gives the following figures :

We know that the distance from Old Cairo to
Aphroditopolis (Atfieh) is about 42 miles (the Roman
mile being very little different from the English mile),
so we see that there is an omission of 10 miles, which
is an error which often arises in the Itinerary. If
this deficit were added to the distance between
Scenas Mandras and Atfieh, it would make the
position of the Roman camp close to Helwan, but
we know that there are ijo Roman ruins there. If,
however, we add the ro miles to the distance between
Old Cairo and Scenas Mandras, the site of the latter
is brought almost exactly on to the ruins of Shurafa.

There are no evidences that Scenas Mandras was
in existence prior to Roman times, and no objects
were found, in situ, of an earlier date. This is further
borne out by the name which the Romans gave it:
Scenas Mandras, or perhaps more correctly, Scenae
Mandrorum, i.e. The Tents of the Enclosures.

Founded shortly before the third century A.D.—as
no earlier remains were found—it became the quarters
for the regiment called Ala Septima Sarmatorum
—the Seventh Wing of the Sarmatians (Parthey's
Map). Sarmatians was the Roman official title for
the Gothic mercenaries; the Notitia Dignitatem
gives a list of the stations occupied by them, which
were chiefly in North Italy, but in no case can I find
a record of the remains of a fortress which might be
attributed to them. Later, the town is mentioned
as the seat of a bishopric, under the name of Scene
Mandron. From the objects found, it appears to
have continued down to the twelfth century.

73. Parthey, in his Erdkunde ties alien Aegyptens,
states that it was a common custom to appoint a
bishopric on the site of an old temple, converting
the temple to meet the requirements of a Christian
church. With the object of finding out if it had
been the case in this instance, several deep trenches
were dug, and the town searched well for earlier
remains. North-west of the town a large granite
block was found, inscribed with the cartouches of
Ramessu II, weighing about 9 tons. It was lying
on a foundation of small limestone blocks, some of
which were inscribed with raised hieroglyphs of the
xiith dynasty, the whole having probably been used
as a threshold. Among the house ruins in the south
part of the town was found a limestone stele, about
4 feet by 2\ feet, with a rounded top, representing a
figure making an offering to Ptah. The stele was
very much weathered, the only recognisable hiero-