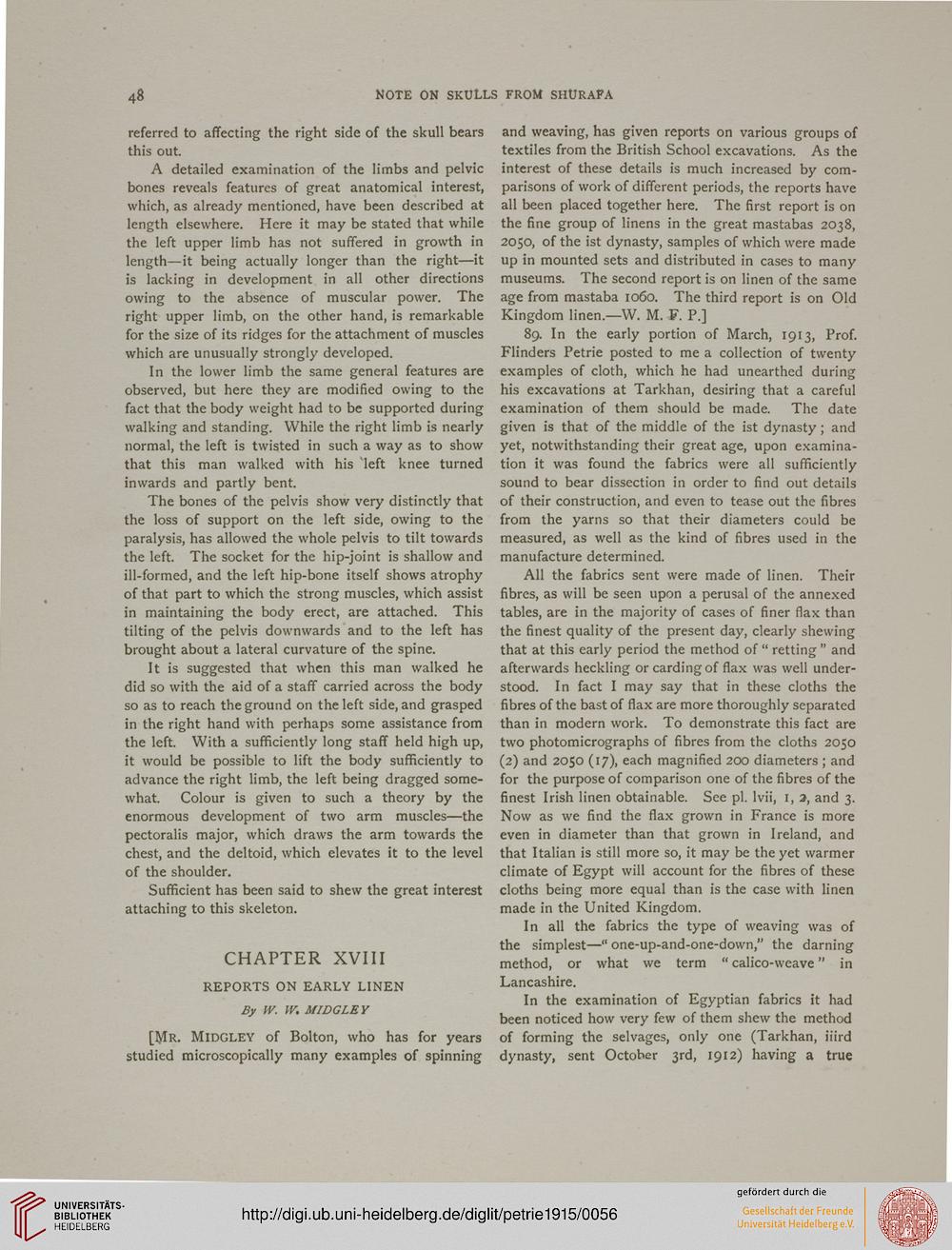 Information about OCR text
NOTE ON SKULLS FROM SHURAFA

referred to affecting the right side of the skull bears
this out.

A detailed examination of the limbs and pelvic
bones reveals features of great anatomical interest,
which, as already mentioned, have been described at
length elsewhere. Here it may be stated that while
the left upper limb has not suffered in growth in
length—it being actually longer than the right—it
is lacking in development in all other directions
owing to the absence of muscular power. The
right upper limb, on the other hand, is remarkable
for the size of its ridges for the attachment of muscles
which are unusually strongly developed.

In the lower limb the same general features are
observed, but here they are modified owing to the
fact that the body weight had to be supported during
walking and standing. While the right limb is nearly
normal, the left is twisted in such a way as to show
that this man walked with his left knee turned
inwards and partly bent.

The bones of the pelvis show very distinctly that
the loss of support on the left side, owing to the
paralysis, has allowed the whole pelvis to tilt towards
the left. The socket for the hip-joint is shallow and
ill-formed, and the left hip-bone itself shows atrophy
of that part to which the strong muscles, which assist
in maintaining the body erect, are attached. This
tilting of the pelvis downwards and to the left has
brought about a lateral curvature of the spine.

It is suggested that when this man walked he
did so with the aid of a staff carried across the body
so as to reach the ground on the left side, and grasped
in the right hand with perhaps some assistance from
the left. With a sufficiently long staff held high up,
it would be possible to lift the body sufficiently to
advance the right limb, the left being dragged some-
what. Colour is given to such a theory by the
enormous development of two arm muscles—the
pectoralis major, which draws the arm towards the
chest, and the deltoid, which elevates it to the level
of the shoulder.

Sufficient has been said to shew the great interest
attaching to this skeleton.

[Mr. MlDGLEY of Bolton, who has for years
studied microscopically many examples of spinning

and weaving, has given reports on various groups of
textiles from the British School excavations. As the
interest of these details is much increased by com-
parisons of work of different periods, the reports have
all been placed together here. The first report Is on
the fine group of linens in the great mastabas 2038,
2050, of the ist dynasty, samples of which were made
up in mounted sets and distributed in cases to many
museums. The second report is on linen of the same
age from mastaba 1060. The third report is on Old
Kingdom linen.—W. M. F. P.]

89. In the early portion of March, 1913, Prof.
Flinders Petrie posted to me a collection of twenty
examples of cloth, which he had unearthed during
his excavations at Tarkhan, desiring that a careful
examination of them should be made. The date
given is that of the middle of the ist dynasty; and
yet, notwithstanding their great age, upon examina-
tion it was found the fabrics were all sufficiently
sound to bear dissection in order to find out details
of their construction, and even to tease out the fibres
from the yarns so that their diameters coutd be
measured, as well as the kind of fibres used in the
manufacture determined.

All the fabrics sent were made of linen. Their
fibres, as will be seen upon a perusal of the annexed
tables, are in the majority of cases of finer flax than
the finest quality of the present day, clearly shewing
that at this early period the method of " retting " and
afterwards heckling or carding of flax was well under-
stood. In fact I may say that in these cloths the
fibres of the bast of flax are more thoroughly separated
than in modern work. To demonstrate this fact are
two photomicrographs of fibres from the cloths 2050
(2) and 2050 (17), each magnified 200 diameters ; and
for the purpose of comparison one of the fibres of the
finest Irish linen obtainable. See pi. Ivii, 1, 2, and 3.
Now as we find the flax grown in France is more
even in diameter than that grown in Ireland, and
that Italian is still more so, it may be the yet warmer
climate of Egypt will account for the fibres of these
cloths being more equal than is the case with linen
made in the United Kingdom.

In all the fabrics the type of weaving was of
the simplest—" one-up-and-one-down," the darning
method, or what we term " calico-weave" in
Lancashire.

In the examination of Egyptian fabrics it had
been noticed how very few of them shew the method
of forming the selvages, only one (Tarkhan, iiird
dynasty, sent October 3rd, 1912) having a true