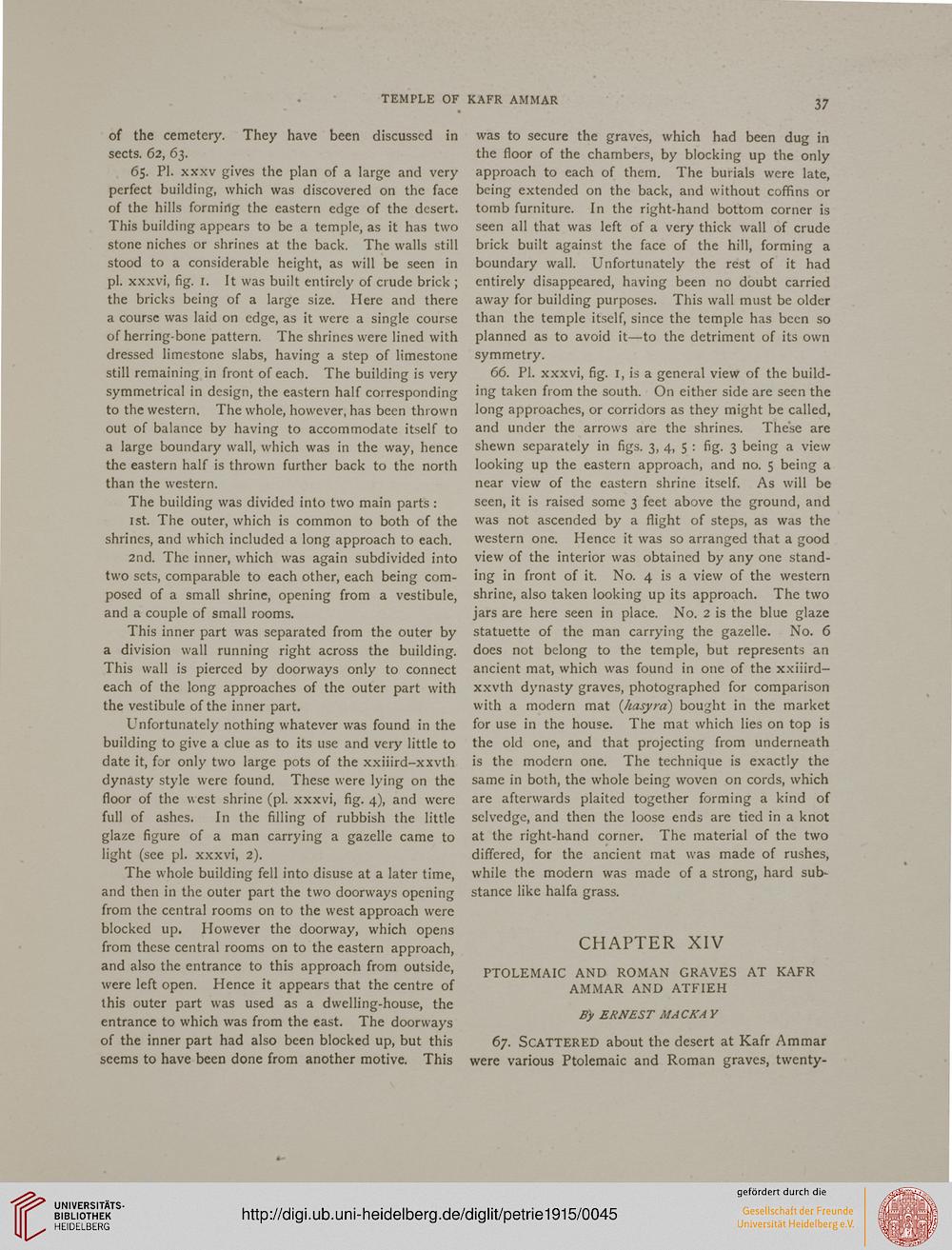 65. PI. xxxv gives the plan of a large and very
perfect building, which was discovered on the face
of the hills forming the eastern edge of the desert.
This building appears to be a temple, as it has two
stone niches or shrines at the back. The walls still
stood to a considerable height, as will be seen in
pi. xxxvi, fig. 1. It was built entirely of crude brick ;
the bricks being of a large size. Here and there
a course was laid on edge, as it were a single course
of herring-bone pattern. The shrines were lined with
dressed limestone slabs, having a step of limestone
still remaining in front of each. The building is very
symmetrical in design, the eastern half corresponding
to the western. The whole, however, has been thrown
out of balance by having to accommodate itself to
a large boundary wall, which was in the way, hence
the eastern half is thrown further back to the north
than the western.

The building was divided into two main parts:
1st. The outer, which is common to both of the
shrines, and which included a long approach to each.
2nd. The inner, which was again subdivided into
two sets, comparable to each other, each being com-
posed of a small shrine, opening from a vestibule,
and a couple of small rooms.

This inner part was separated from the outer by
a division wall running right across the building.
This wall is pierced by doorways only to connect
each of the long approaches of the outer part with
the vestibule of the inner part.

Unfortunately nothing whatever was found in the
building to give a clue as to its use and very little to
date it, for only two large pots of the xxiiird-xxvth
dynasty style were found. These were lying on the
floor of the west shrine (pi. xxxvi, fig. 4), and were
full of ashes. In the filling of rubbish the little
glaze figure of a man carrying a gazelle came to
light (see pi. xxxvi, 2).

The whole building fell into disuse at a later time,
and then in the outer part the two doorways opening
from the central rooms on to the west approach were
blocked up. However the doorway, which opens
from these central rooms on to the eastern approach,
and also the entrance to this approach from outside,
were left open. Hence it appears that the centre of
this outer part was used as a dwelling-house, the
entrance to which was from the east. The doorways
of the inner part had also been blocked up, but this
seems to have been done from another motive. This

was to secure the graves, which had been dug in
the floor of the chambers, by blocking up the only
approach to each of them. The burials were late,
being extended on the back, and without coffins or
tomb furniture. In the right-hand bottom corner is
seen all that was left of a very thick wall of crude
brick built against the face of the hill, forming a
boundary wall. Unfortunately the rest of it had
entirely disappeared, having been no doubt carried
away for building purposes. This wall must be older
than the temple itself, since the temple has been so
planned as to avoid it—to the detriment of its own
symmetry.

66. PI. xxxvi, fig. 1, is a general view of the build-
ing taken from the south. On either side are seen the
long approaches, or corridors as they might be called,
and under the arrows are the shrines. These are
shewn separately in figs. 3, 4, 5 : fig. 3 being a view
looking up the eastern approach, and no. 5 being a
near view of the eastern shrine itself. As will be
seen, it is raised some 3 feet above the ground, and
was not ascended by a flight of steps, as was the
western one. Hence it was so arranged that a good
view of the interior was obtained by any one stand-
ing in front of it. No. 4 is a view of the western
shrine, also taken looking up its approach. The two
jars are here seen in place. No. 2 is the blue glaze
statuette of the man carrying the gazelle. No. 6
does not belong to the temple, but represents an
ancient mat, which was found in one of the xxiiird-
xxvth dynasty graves, photographed for comparison
with a modern mat (Jiasyrd) bought in the market
for use in the house. The mat which lies on top is
the old one, and that projecting from underneath
is the modern one. The technique is exactly the
same in both, the whole being woven on cords, which
are afterwards plaited together forming a kind of
selvedge, and then the loose ends are tied in a knot
at the right-hand corner. The material of the two
differed, for the ancient mat was made of rushes,
while the modern was made of a strong, hard sub-
stance like halfa grass.

PTOLEMAIC AND ROMAN GRAVES AT KAFR
AMMAR AND ATFIEH

67. Scattered about the desert at Kafr Ammar
were various Ptolemaic and Roman graves, twenty-