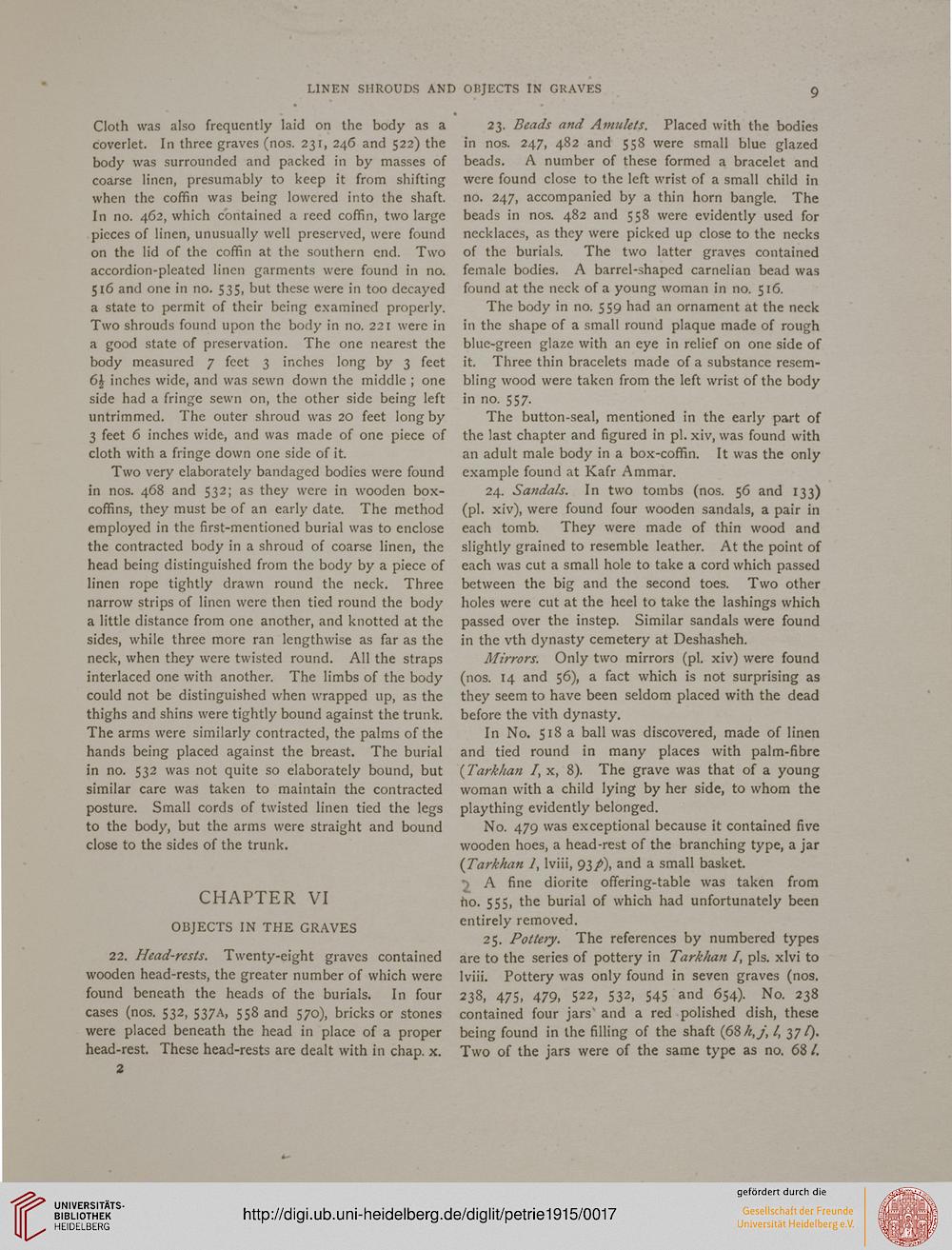 Information about OCR text
LINEN SHROUDS AND OBJECTS IN GRAVES

Cloth was also frequently laid on the body as a
coverlet. In three graves (nos. 231, 246 and 522) the
body was surrounded and packed in by masses of
coarse linen, presumably to keep it from shifting
when the coffin was being lowered into the shaft.
In no. 4G2, which contained a reed coffin, two large
pieces of linen, unusually well preserved, were found
on the lid of the coffin at the southern end. Two
accordion-pleated linen garments were found in no.
516 and one in no. 535. but these were in too decayed
a state to permit of their being examined properly.
Two shrouds found upon the body in no. 221 were in
a good state of preservation. The one nearest the
body measured 7 feet 3 inches long by 3 feet
6J inches wide, and was sewn down the middle ; one
side had a fringe sewn on, the other side being left
untrimmed. The outer shroud was 20 feet long by
3 feet 6 inches wide, and was made of one piece of
cloth with a fringe down one side of it.

Two very elaborately bandaged bodies were found
in nos. 468 and 532; as they were in wooden box-
coffins, they must be of an early date, The method
employed in the first-mentioned burial was to enclose
the contracted body in a shroud of coarse linen, the
head being distinguished from the body by a piece of
linen rope tightly drawn round the neck. Three
narrow strips of linen were then tied round the body
a little distance from one another, and knotted at the
sides, while three more ran lengthwise as far as the
neck, when they were twisted round. All the straps
interlaced one with another. The limbs of the body
could not be distinguished when wrapped up, as the
thighs and shins were tightly bound against the trunk.
The arms were similarly contracted, the palms of the
hands being placed against the breast. The burial
in no. 532 was not quite so elaborately bound, but
similar care was taken to maintain the contracted
posture. Small cords of twisted linen tied the legs
to the body, but the arms were straight and bound
close to the sides of the trunk.

OBJECTS IN THE GRAVES

22. Head-rests. Twenty-eight graves contained
wooden head-rests, the greater number of which were
found beneath the heads of the burials. In four
cases (nos. 532, 537a, 558 and 570), bricks or stones
were placed beneath the head in place of a proper
head-rest. These head-rests are dealt with in chap. x.

23. Beads and Amulets, Placed with the bodies
in nos. 247, 482 and 558 were small blue glazed
beads. A number of these formed a bracelet and
were found close to the left wrist of a small child in
no. 247, accompanied by a thin horn bangle. The
beads in nos. 482 and 558 were evidently used for
necklaces, as they were picked up close to the necks
of the burials. The two latter graves contained
female bodies. A barrel-shaped carnelian bead was
found at the neck of a young woman in no. 516.

The body in no. 559 had an ornament at the neck
in the shape of a small round plaque made of rough
blue-green glaze with an eye in relief on one side of
it. Three thin bracelets made of a substance resem-
bling wood were taken from the left wrist of the body
in no. 557.

The button-seal, mentioned in the early part of
the last chapter and figured in pi. xiv, was found with
an adult male body in a box-coffin. It was the only
example found at Kafr Ammar.

24. Sandals. In two tombs (nos. 56 and 133)
(pi, xiv), were found four wooden sandals, a pair in
each tomb. They were made of thin wood and
slightly grained to resemble leather. At the point of
each was cut a small hole to take a cord which passed
between the big and the second toes. Two other
holes were cut at the heel to take the lashings which
passed over the instep. Similar sandals were found
in the vth dynasty cemetery at Deshasheh.

Mirrors. Only two mirrors (pi. xiv) were found
(nos. 14 and 56), a fact which is not surprising as
they seem to have been seldom placed with the dead
before the vith dynasty.

In No. 518 a ball was discovered, made of linen
and tied round in many places with palm-fibre
{Tarkhan /, x, 8). The grave was that of a young
woman with a child lying by her side, to whom the
plaything evidently belonged.

No. 479 was exceptional because it contained five
wooden hoes, a head-rest of the branching type, a jar
[Tarkhan J, lviii, 9SP), and a small basket.
■y A fine diorite offering-table was taken from
ho. 555, the burial of which had unfortunately been
entirely removed.