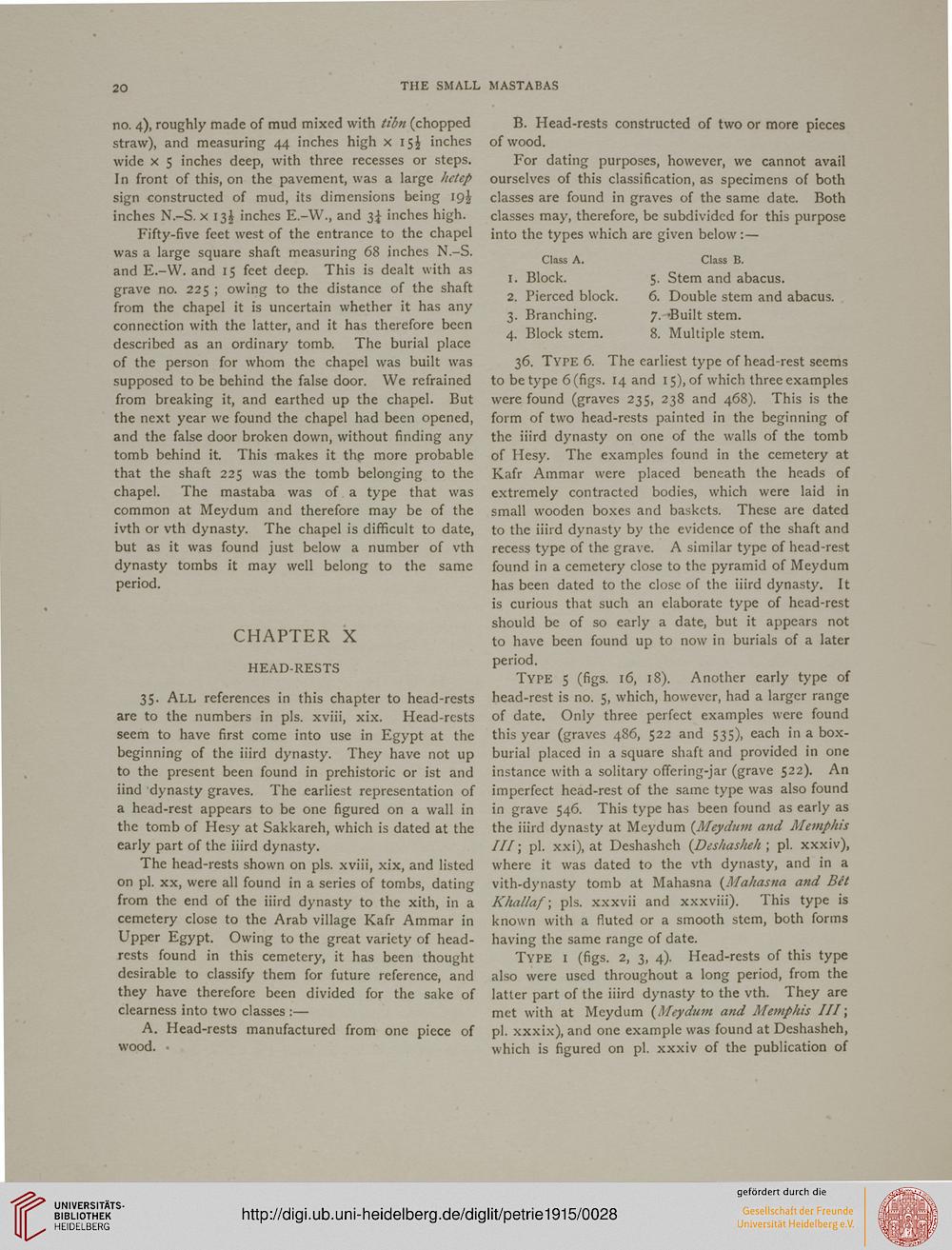 no. 4), roughly made of mud mixed with tibn (chopped
straw), and measuring 44 inches high x 15J inches
wide x 5 inches deep, with three recesses or steps.
In front of this, on the pavement, was a large hctep
sign constructed of mud, its dimensions being 19J
inches N.-S. x 13^ inches E.-W., and 3\ inches high.
Fifty-five feet west of the entrance to the chapel
was a large square shaft measuring 68 inches N.-S.
and E.-W. and 15 feet deep. This is dealt with as
grave no. 225 ; owing to the distance of the shaft
from the chapel it is uncertain whether it has any
connection with the latter, and it has therefore been
described as an ordinary tomb. The burial place
of the person for whom the chapel was built was
supposed to be behind the false door. We refrained
from breaking it, and earthed up the chapel. But
the next year we found the chapel had been opened,
and the false door broken down, without finding any
tomb behind it. This makes it the more probable
that the shaft 225 was the tomb belonging to the
chapel. The mastaba was of a type that was
common at Meydum and therefore may be of the
ivth or vth dynasty. The chapel is difficult to date,
but as it was found just below a number of vth
dynasty tombs it may well belong to the same
period.

35. All references in this chapter to head-rests
are to the numbers in pis. xviii, xix. Head-rests
seem to have first come into use in Egypt at the
beginning of the iiird dynasty. They have not up
to the present been found in prehistoric or 1st and
iind dynasty graves. The earliest representation of
a head-rest appears to be one figured on a wall in
the tomb of Hesy at Sakkareh, which is dated at the
early part of the iiird dynasty.

The head-rests shown on pis. xviii, xix, and listed
on pi. xx, were all found in a series of tombs, dating
from the end of the iiird dynasty to the xith, in a
cemetery close to the Arab village Kafr Ammar in
Upper Egypt. Owing to the great variety of head-
rests found in this cemetery, it has been thought
desirable to classify them for future reference, and
they have therefore been divided for the sake of
clearness into two classes :—

A. Head-rests manufactured from one piece of
wood. •

B. Head-rests constructed of two or more pieces
of wood.

For dating purposes, however, we cannot avail
ourselves of this classification, as specimens of both
classes are found in graves of the same date. Both
classes may, therefore, be subdivided for this purpose
into the types which arc given below:—

Class A. Class B.

36. Type 6. The earliest type of head-rest seems
to be type 6 (figs. 14 and 15), of which three examples
were found (graves 235, 238 and 468). This is the
form of two head-rests painted in the beginning of
the iiird dynasty on one of the walls of the tomb
of llesy. The examples found in the cemetery at
Kafr Ammar were placed beneath the heads of
extremely contracted bodies, which were laid in
small wooden boxes and baskets. These are dated
to the n'ird dynasty by the evidence of the shaft and
recess type of the grave. A similar type of head-rest
found in a cemetery close to the pyramid of Meydum
has been dated to the close of the iiird dynasty. It
is curious that such an elaborate type of head-rest
should be of so early a date, but it appears not
to have been found up to now in burials of a later
period.

Type 5 (figs. 16, 18). Another early type of
head-rest is no. 5, which, however, had a larger range
of date. Only three perfect examples were found
this year (graves 486, 522 and 535), each in a box-
burial placed in a square shaft and provided in one
instance with a solitary offering-jar (grave 522). An
imperfect head-rest of the same type was also found
in grave 546. This type has been found as early as
the iiird dynasty at Meydum {Meydum and Memphis
III; pi. xxi), at Deshashch (Deshaslieh ; pi. xxxiv),
where it was dated to the vth dynasty, and in a
vith-dynasty tomb at Mahasna {Mahasna and Bet
Khallaf; pis. xxxvii and xxxviif). This type is
known with a fluted or a smooth stem, both forms
having the same range of date.

Type i (figs. 2, 3, 4). Head-rests of this type
also were used throughout a long period, from the
latter part of the iiird dynasty to the vth. They are
met with at Meydum {Meydum and Memphis III\
pi. xxxix), and one example was found at Deshasheh,
which is figured on pi. xxxiv of the publication of