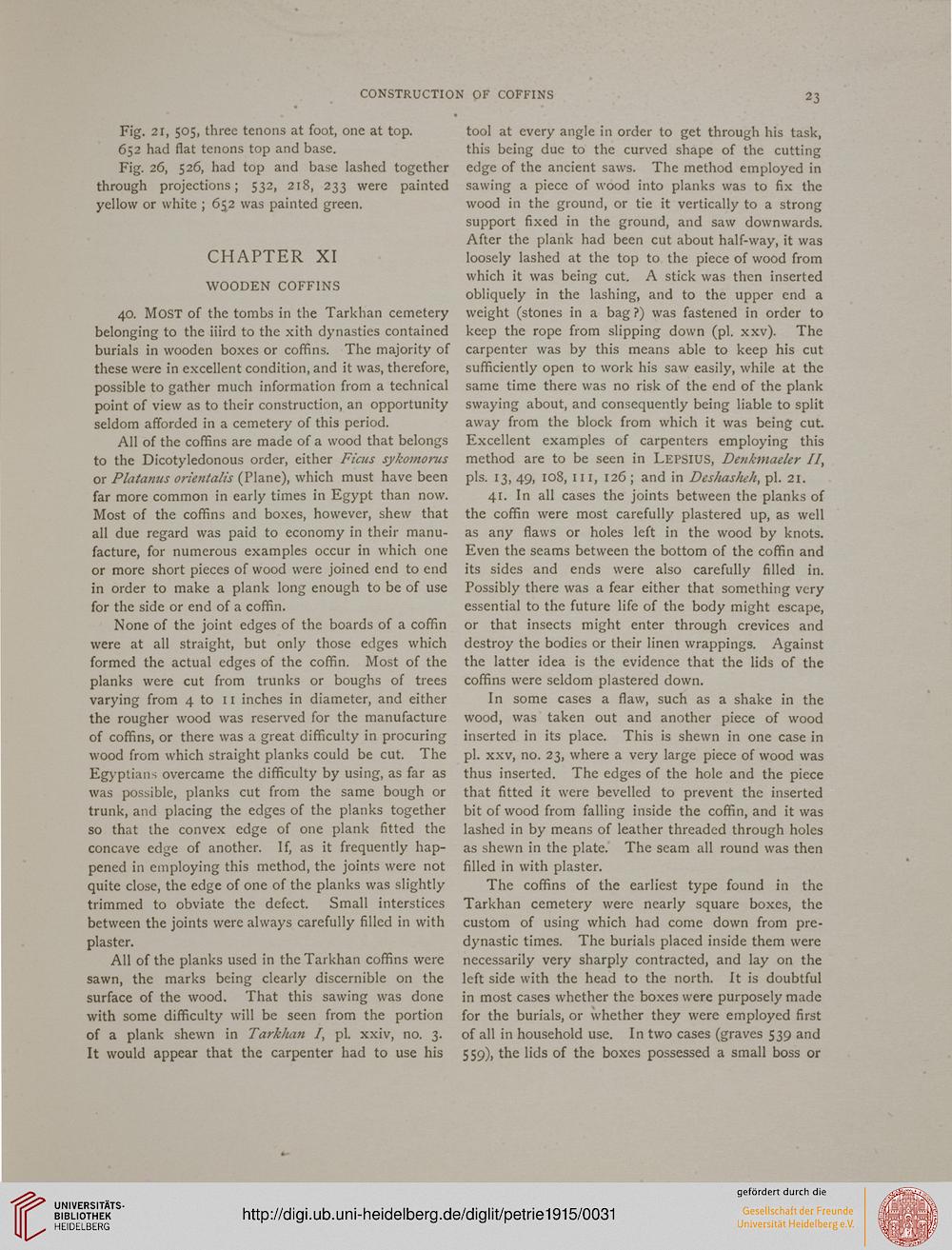 40. Most of the tombs in the Tarkhan cemetery
belonging to the iiird to the xith dynasties contained
burials in wooden boxes or coffins. The majority of
these were in excellent condition, and it was, therefore,
possible to gather much information from a technical
point of view as to their construction, an opportunity
seldom afforded in a cemetery of this period.

All of the coffins are made of a wood that belongs
to the Dicotyledonous order, either Fiats sykomorus
or Platanus orientals (Plane), which must have been
far more common in early times in Egypt than now.
Most of the coffins and boxes, however, shew that
all due regard was paid to economy in their manu-
facture, for numerous examples occur in which one
or more short pieces of wood were joined end to end
in order to make a plank long enough to be of use
for the side or end of a coffin.

None of the joint edges of the boards of a coffin
were at all straight, but only those edges which
formed the actual edges of the coffin. Most of the
planks were cut from trunks or boughs of trees
varying from 4 to 11 inches in diameter, and either
the rougher wood was reserved for the manufacture
of coffins, or there was a great difficulty in procuring
wood from which straight planks could be cut. The
Egyptians overcame the difficulty by using, as far as
was possible, planks cut from the same bough or
trunk, and placing the edges of the planks together
so that the convex edge of one plank fitted the
concave edge of another. If, as it frequently hap-
pened in employing this method, the joints were not
quite close, the edge of one of the planks was slightly
trimmed to obviate the defect. Small interstices
between the joints were always carefully filled in with
plaster.

All of the planks used in the Tarkhan coffins were
sawn, the marks being clearly discernible on the
surface of the wood. That this sawing was done
with some difficulty will be seen from the portion
of a plank shewn in Tarkhan I, pi. xxiv, no. 3.
It would appear that the carpenter had to use his

tool at every angle in order to get through his task,
this being due to the curved shape of the cutting
edge of the ancient saws. The method employed in
sawing a piece of wood into planks was to fix the
wood in the ground, or tie it vertically to a strong
support fixed in the ground, and saw downwards.
After the plank had been cut about half-way, it was
loosely lashed at the top to the piece of wood from
which it was being cut. A stick was then inserted
obliquely in the lashing, and to the upper end a
weight (stones in a bag?) was fastened in order to
keep the rope from slipping down (pi. xxv). The
carpenter was by this means able to keep his cut
sufficiently open to work his saw easily, while at the
same time there was no risk of the end of the plank
swaying about, and consequently being liable to split
away from the block from which it was being cut.
Excellent examples of carpenters employing this
method are to be seen in Lepsius, Denkmaeler II,
pis. 13, 49, 10S, in, 126 ; and in Deshasheh, pi. 21.

41. In all cases the joints between the planks of
the coffin were most carefully plastered up, as well
as any flaws or holes left in the wood by knots.
Even the seams between the bottom of the coffin and
its sides and ends were also carefully filled in.
Possibly there was a fear either that something very
essential to the future life of the body might escape,
or that insects might enter through crevices and
destroy the bodies or their linen wrappings. Against
the latter idea is the evidence that the lids of the
coffins were seldom plastered down.

In some cases a flaw, such as a shake in the
wood, was taken out and another piece of wood
inserted in its place. This is shewn in one case in
pi. xxv, no. 23, where a very large piece of wood was
thus inserted. The edges of the hole and the piece
that fitted it were bevelled to prevent the inserted
bit of wood from falling inside the coffin, and it was
lashed in by means of leather threaded through holes
as shewn in the plate. The seam all round was then
filled in with plaster.

The coffins of the earliest type found in the
Tarkhan cemetery were nearly square boxes, the
custom of using which had come down from pre-
dynastic times. The burials placed inside them were
necessarily very sharply contracted, and lay on the
left side with the head to the north. It is doubtful
in most cases whether the boxes were purposely made
for the burials, or whether they were employed first
of all in household use. In two cases (graves 539 and
559), the lids of the boxes possessed a small boss or