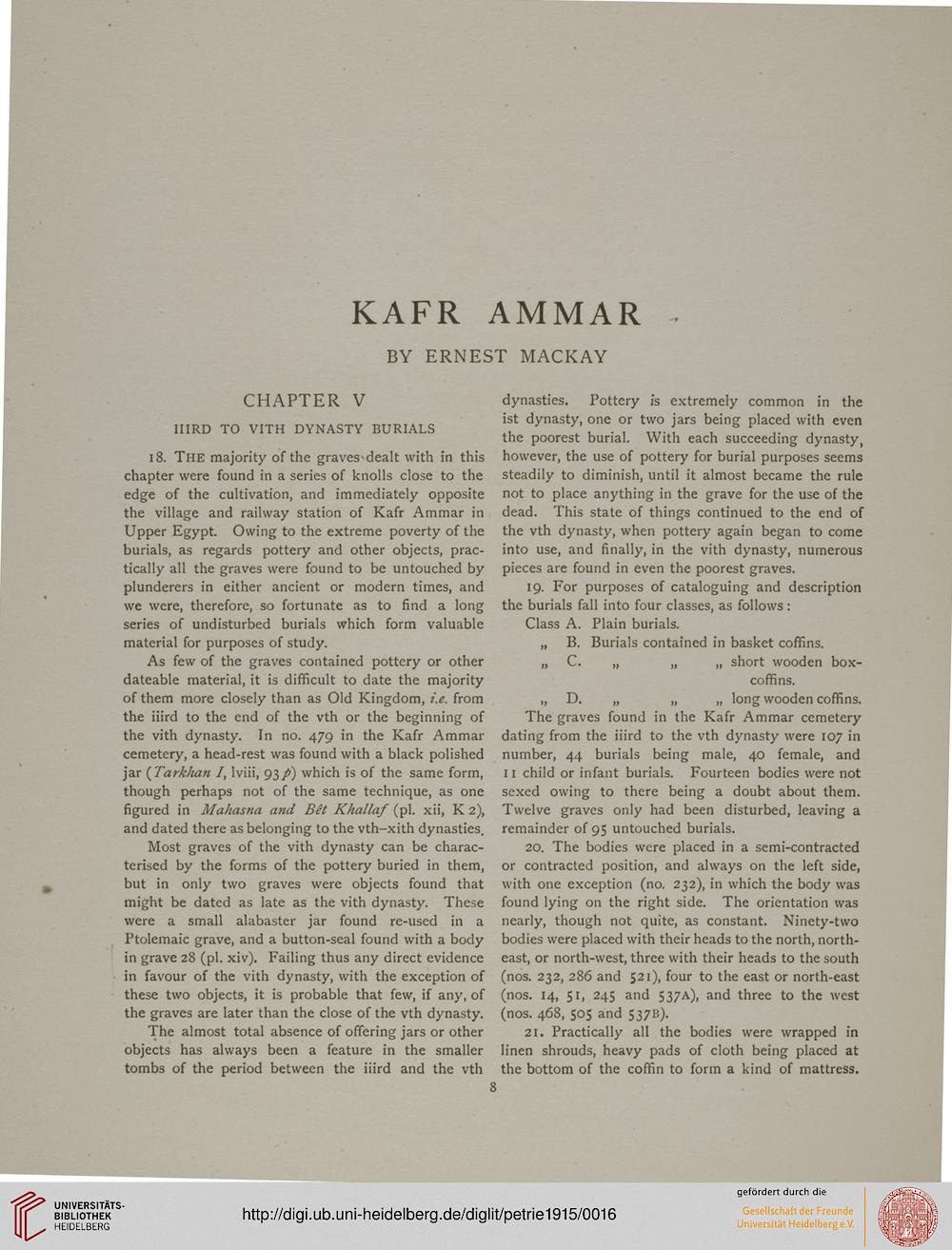 18. The majority of the graves-dealt with in this
chapter were found in a series of knolls close to the
edge of the cultivation, and immediately opposite
the village and railway station of Kafr Ammar in
Upper Egypt. Owing to the extreme poverty of the
burials, as regards pottery and other objects, prac-
tically all the graves were found to be untouched by
plunderers in either ancient or modern times, and
we were, therefore, so fortunate as to find a long
series of undisturbed burials which form valuable
material for purposes of study.

As few of the graves contained pottery or other
dateable material, it is difficult to date the majority
of them more closely than as Old Kingdom, i.e. from
the iiird to the end of the vth or the beginning of
the vith dynasty. In no. 479 in the Kafr Ammar
cemetery, a head-rest was found with a black polished
jar (Tarkfian I, Iviii, 93^) which is of the same form,
though perhaps not of the same technique, as one
figured in Mahasna and Bit Khallaf (pi. xii, K 2),
and dated there as belonging to the vth-xith dynasties.

Most graves of the vith dynasty can be charac-
terised by the forms of the pottery buried in them,
but in only two graves were objects found that
might be dated as late as the vith dynasty. These
were a small alabaster jar found re-used in a
Ptolemaic grave, and a button-seal found with a body
in grave 28 (pi. xiv). Failing thus any direct evidence
in favour of the vith dynasty, with the exception of
these two objects, it is probable that few, if any, of
the graves are later than the close of the vth dynasty.

dynasties. Pottery is extremely common in the
ist dynasty, one or two jars being placed with even
the poorest burial. With each succeeding dynasty,
however, the use of pottery for burial purposes seems
steadily to diminish, until it almost became the rule
not to place anything in the grave for the use of the
dead. This state of things continued to the end of
the vth dynasty, when pottery again began to come
into use, and finally, in the vith dynasty, numerous
pieces are found in even the poorest graves.

19. For purposes of cataloguing and description
the burials fall into four classes, as follows:

The graves found in the Kafr Ammar cemetery
dating from the iiird to the vth dynasty were 107 in
number, 44 burials being male, 40 female, and
11 child or infant burials. Fourteen bodies were not
sexed owing to there being a doubt about them.
Twelve graves only had been disturbed, leaving a
remainder of 95 untouched burials.

21. Practically all the bodies were wrapped in
linen shrouds, heavy pads of cloth being placed at
the bottom of the coffin to form a kind of mattress.