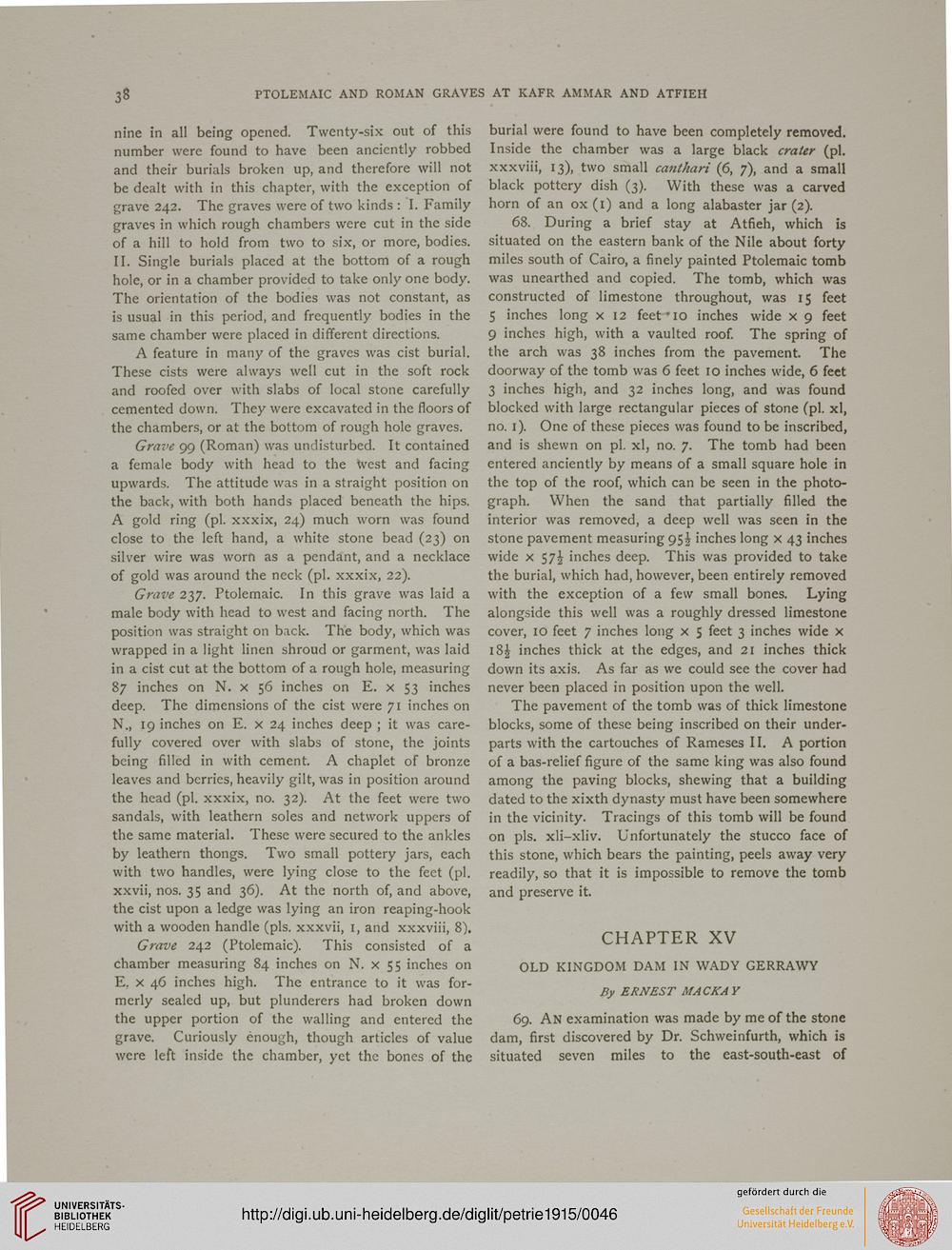 nine in a!l being opened. Twenty-six out of this
number were found to have been anciently robbed
and their burials broken up, and therefore will not
be dealt with in this chapter, with the exception of
grave 242. The graves were of two kinds : I. Family
graves in which rough chambers were cut in the side
of a hill to hold from two to six, or more, bodies.
II. Single burials placed at the bottom of a rough
hole, or in a chamber provided to take only one body.
The orientation of the bodies was not constant, as
is usual in this period, and frequently bodies in the
same chamber were placed in different directions.

A feature in many of the graves was cist burial.
These cists were always well cut in the soft rock
and roofed over with slabs of local stone carefully
cemented down. They were excavated in the floors of
the chambers, or at the bottom of rough hole graves.

Grave 99 (Roman) was undisturbed. It contained
a female body with head to the west and facing
upwards. The attitude was in a straight position on
the back, with both hands placed beneath the hips.
A gold ring (pi. xxxix, 24) much worn was found
close to the left hand, a white stone bead (23) on
silver wire was worn as a pendant, and a necklace
of gold was around the neck (pi. xxxix, 22).

Grave 237. Ptolemaic. In this grave was laid a
male body with head to west and facing north. The
position was straight on back. The body, which was
wrapped in a light linen shroud or garment, was laid
in a cist cut at the bottom of a rough hole, measuring
87 inches on N. x 56 inches on E. x 53 inches
deep. The dimensions of the cist were 71 inches on
N„ 19 inches on E. x 24 inches deep ; it was care-
fully covered over with slabs of stone, the joints
being filled in with cement. A chaplet of bronze
leaves and berries, heavily gilt, was in position around
the head (pi. xxxix, no. 32). At the feet were two
sandals, with leathern soles and network uppers of
the same material. These were secured to the ankles
by leathern thongs. Two small pottery jars, each
with two handles, were lying close to the feet (pi.
xxvii, nos. 35 and 36). At the north of, and above,
the cist upon a ledge was lying an iron reaping-hook
with a wooden handle (pis. xxxvii, 1, and xxxviii, 8).

Grave 242 (Ptolemaic). This consisted of a
chamber measuring 84 inches on N. x 55 inches on
E. x 46 inches high. The entrance to it was for-
merly sealed up, but plunderers had broken down
the upper portion of the walling and entered the
grave. Curiously enough, though articles of value
were left inside the chamber, yet the bones of the

burial were found to have been completely removed.
Inside the chamber was a large black crater (pi.
xxxviii, 13), two small cantkari (6, 7), and a small
black pottery dish (3). With these was a carved
horn of an ox (1) and a long alabaster jar (2).

68. During a brief stay at Atfieh, which is
situated on the eastern bank of the Nile about forty
miles south of Cairo, a finely painted Ptolemaic tomb
was unearthed and copied. The tomb, which was
constructed of limestone throughout, was 15 feet
5 inches long x 12 feet • 10 inches wide x 9 feet
9 inches high, with a vaulted roof. The spring of
the arch was 38 inches from the pavement. The
doorway of the tomb was 6 feet 10 inches wide, 6 feet
3 inches high, and 32 inches long, and was found
blocked with large rectangular pieces of stone (pi. xl,
no. 1). One of these pieces was found to be inscribed,
and is shewn on pi. xl, no. 7. The tomb had been
entered anciently by means of a small square hole in
the top of the roof, which can be seen in the photo-
graph. When the sand that partially filled the
interior was removed, a deep well was seen in the
stone pavement measuring 95A inches long x 43 inches
wide x 57J inches deep. This was provided to take
the burial, which had, however, been entirely removed
with the exception of a few small bones. Lying
alongside this well was a roughly dressed limestone
cover, 10 feet 7 inches long x 5 feet 3 inches wide x
i8£ inches thick at the edges, and 21 inches thick
down its axis. As far as we could see the cover had
never been placed in position upon the well.

The pavement of the tomb was of thick limestone
blocks, some of these being inscribed on their under-
pays with the cartouches of Rameses II. A portion
of a bas-relief figure of the same king was also found
among the paving blocks, shewing that a building
dated to the xixth dynasty must have been somewhere
in the vicinity. Tracings of this tomb will be found
on pis. xli-xliv. Unfortunately the stucco face of
this stone, which bears the painting, peels away very
readily, so that it is impossible to remove the tomb
and preserve it.

69. AN examination was made by me of the stone
dam, first discovered by Dr. Schweinfurth, which is
situated seven miles to the east-south-east of