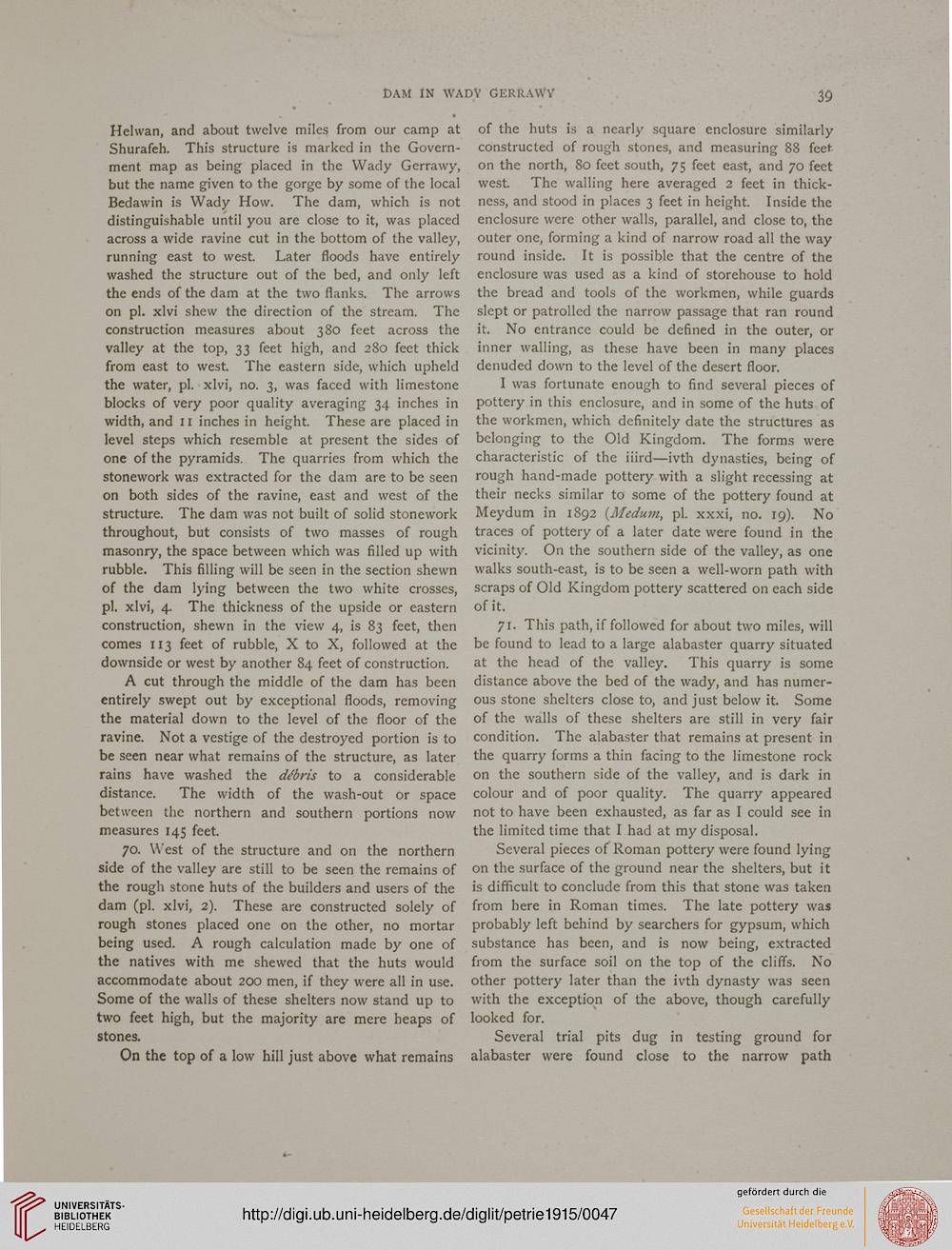 Hehvan, and about twelve miles from our camp at
Shurafeh. This structure is marked in the Govern-
ment map as being placed in the Wady Gerrawy,
but the name given to the gorge by some of the local
Bedawin is Wady How. The dam, which is not
distinguishable until you are close to it, was placed
across a wide ravine cut in the bottom of the valley,
running east to west. Later floods have entirely
washed the structure out of the bed, and only left
the ends of the dam at the two flanks. The arrows
on pi. xlvi shew the direction of the stream. The
construction measures about 380 feet across the
valley at the top, 33 feet high, and 280 feet thick
from east to west. The eastern side, which upheld
the water, pi. xlvi, no. 3, was faced with limestone
blocks of very poor quality averaging 34 inches in
width, and 11 inches in height. These are placed in
level steps which resemble at present the sides of
one of the pyramids. The quarries from which the
stonework was extracted for the dam are to be seen
on both sides of the ravine, east and west of the
structure. The dam was not built of solid stonework
throughout, but consists of two masses of rough
masonry, the space between which was filled up with
rubble. This filling will be seen in the section shewn
of the dam lying between the two white crosses,
pi. xlvi, 4. The thickness of the upside or eastern
construction, shewn in the view 4, is 83 feet, then
comes 113 feet of rubble, X to X, followed at the
downside or west by another 84 feet of construction.
A cut through the middle of the dam has been
entirely swept out by exceptional floods, removing
the material down to the level of the floor of the
ravine. Not a vestige of the destroyed portion is to
be seen near what remains of the structure, as later
rains have washed the dt'bris to a considerable
distance. The width of the wash-out or space
between the northern and southern portions now
measures 145 feet.

70. West of the structure and on the northern
side of the valley are still to be seen the remains of
the rough stone huts of the builders and users of the
dam (pi. xlvi, 2). These are constructed solely of
rough stones placed one on the other, no mortar
being used. A rough calculation made by one of
the natives with me shewed that the huts would
accommodate about 200 men, if they were all in use.
Some of the walls of these shelters now stand up to
two feet high, but the majority are mere heaps of
stones.

On the top of a low hill just above what remains

of the huts is a nearly square enclosure similarly
constructed of rough stones, and measuring 88 fee*
on the north, So feet south, 7$ feet east, and 70 feet
west The walling here averaged 2 feet in thick-
ness, and stood in places 3 feet in height. Inside the
enclosure were other walls, parallel, and close to, the
outer one, forming a kind of narrow road all the way
round inside. It is possible that the centre of the
enclosure was used as a kind of storehouse to hold
the bread and tools of the workmen, while guards
slept or patrolled the narrow passage that ran round
it. No entrance could be defined in the outer, or
inner walling, as these have been in many places
denuded down to the level of the desert floor.

I was fortunate enough to find several pieces of
pottery in this enclosure, and in some of the huts of
the workmen, which definitely date the structures as
belonging to the Old Kingdom. The forms were
characteristic of the iiird—ivth dynasties, being of
rough hand-made pottery with a slight recessing at
their necks similar to some of the pottery found at
Meydum in 1892 {Median, pi. xxxi, no. 19). No
traces of pottery of a later date were found in the
vicinity. On the southern side of the valley, as one
walks south-east, is to be seen a well-worn path with
scraps of Old Kingdom pottery scattered on each side
of it.

71. This path, if followed for about two miles, will
be found to lead to a large alabaster quarry situated
at the head of the valley. This quarry is some
distance above the bed of the wady, and has numer-
ous stone shelters close to, and just below it. Some
of the walls of these shelters are still in very fair
condition. The alabaster that remains at present in
the quarry forms a thin facing to the limestone rock
on the southern side of the valley, and is dark in
colour and of poor quality. The quarry appeared
not to have been exhausted, as far as I could see in
the limited time that I had at my disposal.

Several pieces of Roman pottery were found lying
on the surface of the ground near the shelters, but it
is difficult to conclude from this that stone was taken
from here in Roman times. The late pottery was
probably left behind by searchers for gypsum, which
substance has been, and is now being, extracted
from the surface soil on the top of the cliffs. No
other pottery later than the ivth dynasty was seen
with the exception of the above, though carefully
looked for.