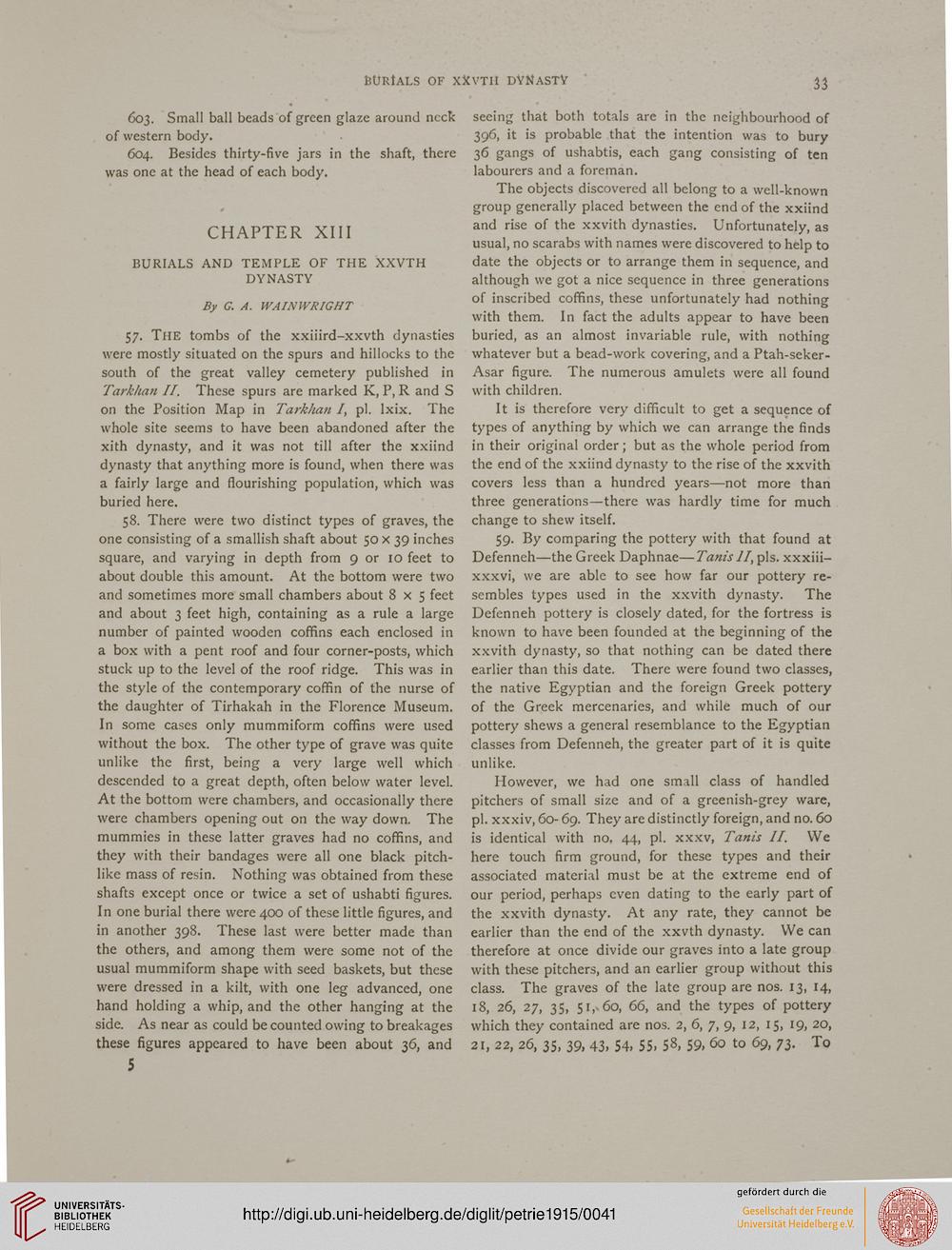 604. Besides thirty-five jars in the shaft, there
was one at the head of each body.

BURIALS AND TEMPLE OF THE XXVTH
DYNASTY

By G. A. WAINWRIGHT

57. The tombs of the xxiiird-xxvth dynasties
were mostly situated on the spurs and hillocks to the
south of the great valley cemetery published in
Tarkhan II. These spurs are marked K, P, R and S
on the Position Map in Tarkhan I, pi. lxix. The
whole site seems to have been abandoned after the
xith dynasty, and it was not till after the xxiind
dynasty that anything more is found, when there was
a fairly large and flourishing population, which was
buried here.

58. There were two distinct types of graves, the
one consisting of a smallish shaft about 50 x 39 inches
square, and varying in depth from 9 or 10 feet to
about double this amount. At the bottom were two
and sometimes more small chambers about 8x5 feet
and about 3 feet high, containing as a rule a large
number of painted wooden coffins each enclosed in
a box with a pent roof and four corner-posts, which
stuck up to the level of the roof ridge. This was in
the style of the contemporary coffin of the nurse of
the daughter of Tirhakah in the Florence Museum.
In some cases only mummiform coffins were used
without the box. The other type of grave was quite
unlike the first, being a very large well which
descended to a great depth, often below water level.
At the bottom were chambers, and occasionally there
were chambers opening out on the way down. The
mummies in these latter graves had no coffins, and
they with their bandages were all one black pitch-
like mass of resin. Nothing was obtained from these
shafts except once or twice a set of ushabti figures.
In one burial there were 400 of these little figures, and
in another 398. These last were better made than
the others, and among them were some not of the
usual mummiform shape with seed baskets, but these
were dressed in a kilt, with one leg advanced, one
hand holding a whip, and the other hanging at the
side. As near as could be counted owing to breakages
these figures appeared to have been about 36, and

seeing that both totals are in the neighbourhood of
396, it is probable that the intention was to bury
36 gangs of ushabtis, each gang consisting of ten
labourers and a foreman.

The objects discovered all belong to a well-known
group generally placed between the end of the xxiind
and rise of the xxvith dynasties. Unfortunately, as
usual, no scarabs with names were discovered to help to
date the objects or to arrange them in sequence, and
although we got a nice sequence in three generations
of inscribed coffins, these unfortunately had nothing
with them. In fact the adults appear to have been
buried, as an almost invariable rule, with nothing
whatever but a bead-work covering, and a Ptah-seker-
Asar figure. The numerous amulets were all found
with children.

It is therefore very difficult to get a sequence of
types of anything by which we can arrange the finds
in their original order; but as the whole period from
the end of the xxiind dynasty to the rise of the xxvith
covers less than a hundred years—not more than
three generations—there was hardly time for much
change to shew itself.

59. By comparing the pottery with that found at
Defenneh—the Greek Daphnae—TomsII,pis. xxxiii-
xxxvi, we are able to see how far our pottery re-
sembles types used in the xxvith dynasty. The
Defenneh pottery is closely dated, for the fortress is
known to have been founded at the beginning of the
xxvith dynasty, so that nothing can be dated there
earlier than this date. There were found two classes,
the native Egyptian and the foreign Greek pottery
of the Greek mercenaries, and while much of our
pottery shews a general resemblance to the Egyptian
classes from Defenneh, the greater part of it is quite
unlike.