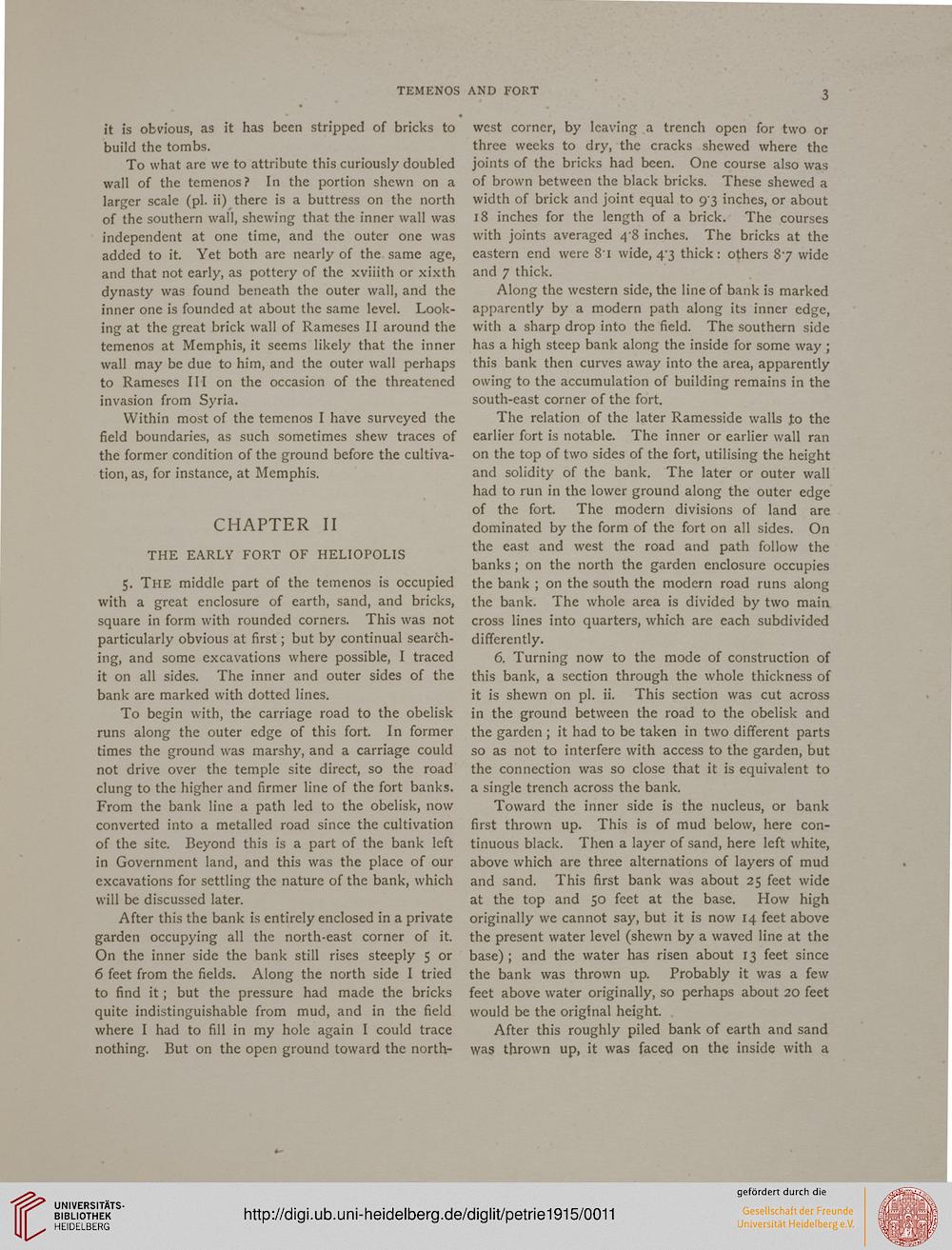 it is obvious, as it has been stripped of bricks to
build the tombs.

To what are we to attribute this curiously doubled
wall of the temenos? In the portion shewn on a
larger scale (pi. ii) there is a buttress on the north
of the southern wall, shewing that the inner wall was
independent at one time, and the outer one was
added to it. Yet both are nearly of the same age,
and that not early, as pottery of the xviiith or xixth
dynasty was found beneath the outer wall, and the
inner one is founded at about the same level. Look-
ing at the great brick wall of Rameses II around the
temenos at Memphis, it seems likely that the inner
wall may be due to him, and the outer wall perhaps
to Rameses III on the occasion of the threatened
invasion from Syria.

Within most of the temenos I have surveyed the
field boundaries, as such sometimes shew traces of
the former condition of the ground before the cultiva-
tion, as, for instance, at Memphis.

THE EARLY FORT OF HELIOPOLIS

5. The middle part of the temenos is occupied
with a great enclosure of earth, sand, and bricks,
square in form with rounded corners. This was not
particularly obvious at first; but by continual search-
ing, and some excavations where possible, I traced
it on all sides. The inner and outer sides of the
bank are marked with dotted lines.

To begin with, the carriage road to the obelisk
runs along the outer edge of this fort. In former
times the ground was marshy, and a carriage could
not drive over the temple site direct, so the road
clung to the higher and firmer line of the fort banks.
From the bank line a path led to the obelisk, now
converted into a metalled road since the cultivation
of the site. Beyond this is a part of the bank left
in Government land, and this was the place of our
excavations for settling the nature of the bank, which
will be discussed later.

After this the bank is entirely enclosed in a private
garden occupying all the north-east corner of it.
On the inner side the bank still rises steeply 5 or
6 feet from the fields. Along the north side I tried
to find it ; but the pressure had made the bricks
quite indistinguishable from mud, and in the field
where I had to fill in my hole again I could trace
nothing. But on the open ground toward the north-

west corner, by leaving a trench open for two or
three weeks to dry, the cracks shewed where the
joints of the bricks had been. One course also was
of brown between the black bricks. These shewed a
width of brick and joint equal to 93 inches, or about
18 inches for the length of a brick. The courses
with joints averaged 4S inches. The bricks at the
eastern end were 8'i wide, 4-3 thick: others 87 wide
and 7 thick.

Along the western side, the line of bank is marked
apparently by a modern path along its inner edge,
with a sharp drop into the field. The southern side
has a high steep bank along the inside for some way;
this bank then curves away into the area, apparently
owing to the accumulation of building remains in the
south-east corner of the fort.

The relation of the later Ramesside walls Jo the
earlier fort is notable. The inner or earlier wall ran
on the top of two sides of the fort, utilising the height
and solidity of the bank. The later or outer wall
had to run in the lower ground along the outer edge
of the fort. The modern divisions of land are
dominated by the form of the fort on all sides. On
the east and west the road and path follow the
banks; on the north the garden enclosure occupies
the bank ; on the south the modern road runs along
the bank. The whole area is divided by two main
cross lines into quarters, which arc each subdivided
differently.

6. Turning now to the mode of construction of
this bank, a section through the whole thickness of
it is shewn on pi. ii. This section was cut across
in the ground between the road to the obelisk and
the garden ; it had to be taken in two different parts
so as not to interfere with access to the garden, but
the connection was so close that it is equivalent to
a single trench across the bank.

Toward the inner side is the nucleus, or bank
first thrown up. This is of mud below, here con-
tinuous black. Then a layer of sand, here left white,
above which are three alternations of layers of mud
and sand. This first bank was about 25 feet wide
at the top and 50 feet at the base. How high
originally we cannot say, but it is now 14 feet above
the present water level (shewn by a waved line at the
base) ; and the water has risen about 13 feet since
the bank was thrown up. Probably it was a few
feet above water originally, so perhaps about 20 feet
would be the original height.

After this roughly piled bank of earth and sand
was thrown up, it was faced on the inside with a