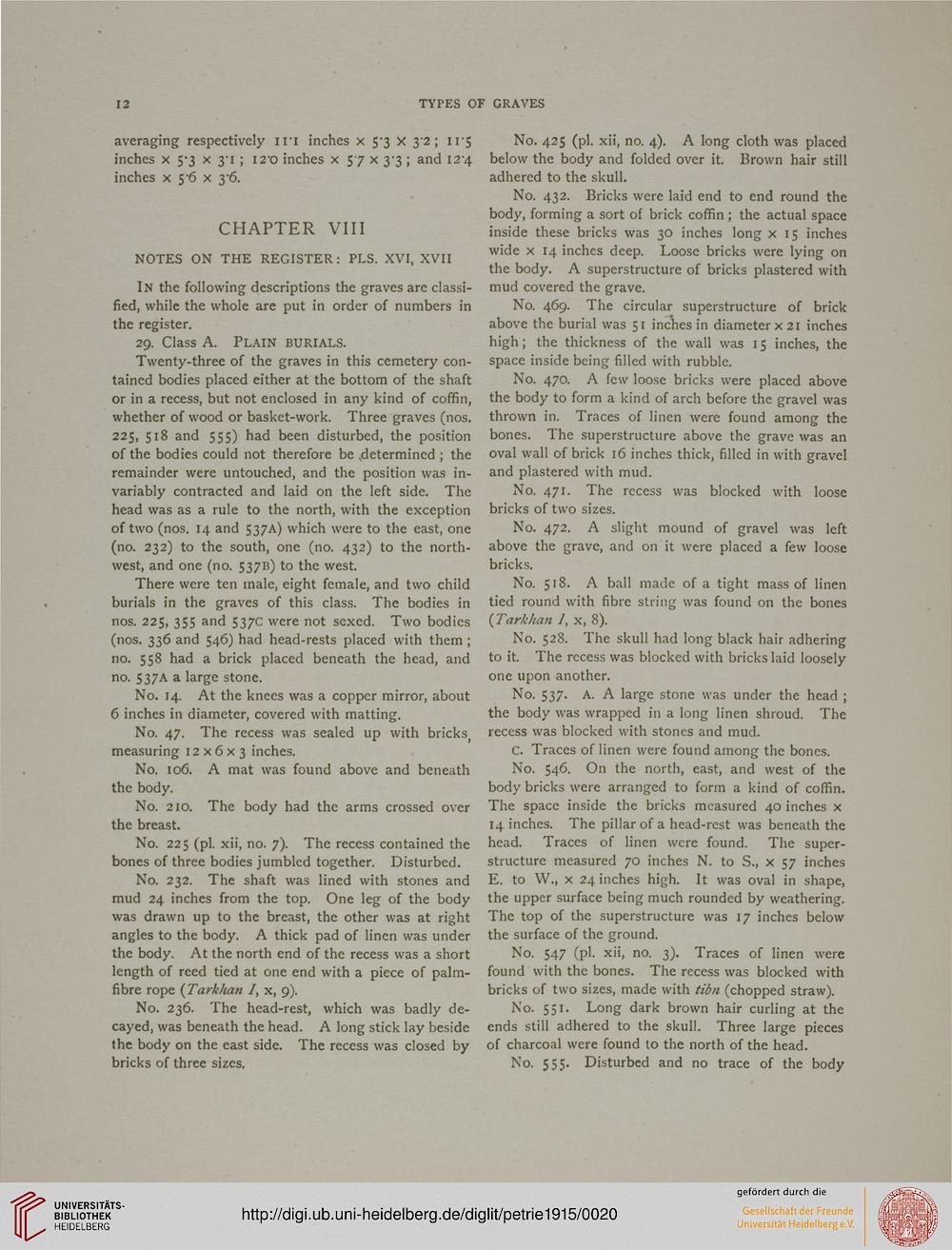 In the following descriptions the graves are classi-
fied, while the whole are put in order of numbers in
the register.

Twenty-three of the graves in this cemetery con-
tained bodies placed either at the bottom of the shaft
or in a recess, but not enclosed in any kind of coffin,
whether of wood or basket-work. Three graves (nos.
225, 518 and 555) had been disturbed, the position
of the bodies could not therefore be .determined ; the
remainder were untouched, and the position was in-
variably contracted and laid on the left side. The
head was as a rule to the north, with the exception
of two (nos. 14 and 537A) which were to the east, one
(no. 232) to the south, one (no. 432) to the north-
west, and one (no. 537B) to the west.

No. 14. At the knees was a copper mirror, about
6 inches in diameter, covered with matting.

No. 47. The recess was sealed up with bricks
measuring 12x6x3 inches.

No. 210. The body had the arms crossed over
the breast.

No. 225 (pi. xii, no. 7). The recess contained the
bones of three bodies jumbled together. Disturbed.

No. 232. The shaft was lined with stones and
mud 24 inches from the top. One leg of the body
was drawn up to the breast, the other was at right
angles to the body. A thick pad of linen was under
the body. At the north end of the recess was a short
length of reed tied at one end with a piece of palm-
fibre rope (Tarkhan I, x, 9).

No. 236. The head-rest, which was badly de-
cayed, was beneath the head. A long stick lay beside
the body on the east side. The recess was closed by
bricks of three sizes.

No. 432. Bricks were laid end to end round the
body, forming a sort of brick coffin ; the actual space
inside these bricks was 30 inches long x 15 inches
wide x 14 inches deep. Loose bricks were lying on
the body. A superstructure of bricks plastered with
mud covered the grave.

No. 469. The circular superstructure of brick
above the burial was 51 inches in diameter x 21 inches
high; the thickness of the wall was 15 inches, the
space inside being filled with rubble.

No. 470. A few loose bricks were placed above
the body to form a kind of arch before the gravel was
thrown in. Traces of linen were found among the
bones. The superstructure above the grave was an
oval wall of brick 16 inches thick, filled in with grave!
and plastered with mud.

No. 471. The recess was blocked with loose
bricks of two sizes.

No. 472. A slight mound of gravel was left
above the grave, and on it were placed a few loose
bricks.

No. 528. The skull had long black hair adhering
to it. The recess was blocked with bricks laid loosely
one upon another.

No. 537. A. A large stone was under the head ;
the body was wrapped in a long linen shroud. The
recess was blocked with stones and mud.

C. Traces of linen were found among the bones.

No. 546. On the north, east, and west of the
body bricks were arranged to form a kind of coffin.
The space inside the bricks measured 40 inches x
14 inches. The pillar of a head-rest was beneath the
head. Traces of linen were found. The super-
structure measured 70 inches N. to S., x 57 inches
E. to W., x 24 inches high. It was oval in shape,
the upper surface being much rounded by weathering.
The top of the superstructure was 17 inches below
the surface of the ground.

No. 547 (pi. xii, no. 3). Traces of linen were
found with the bones. The recess was blocked with
bricks of two sizes, made with tibn (chopped straw).

No. 551. Long dark brown hair curling at the
ends still adhered to the skull. Three large pieces
of charcoal were found to the north of the head.