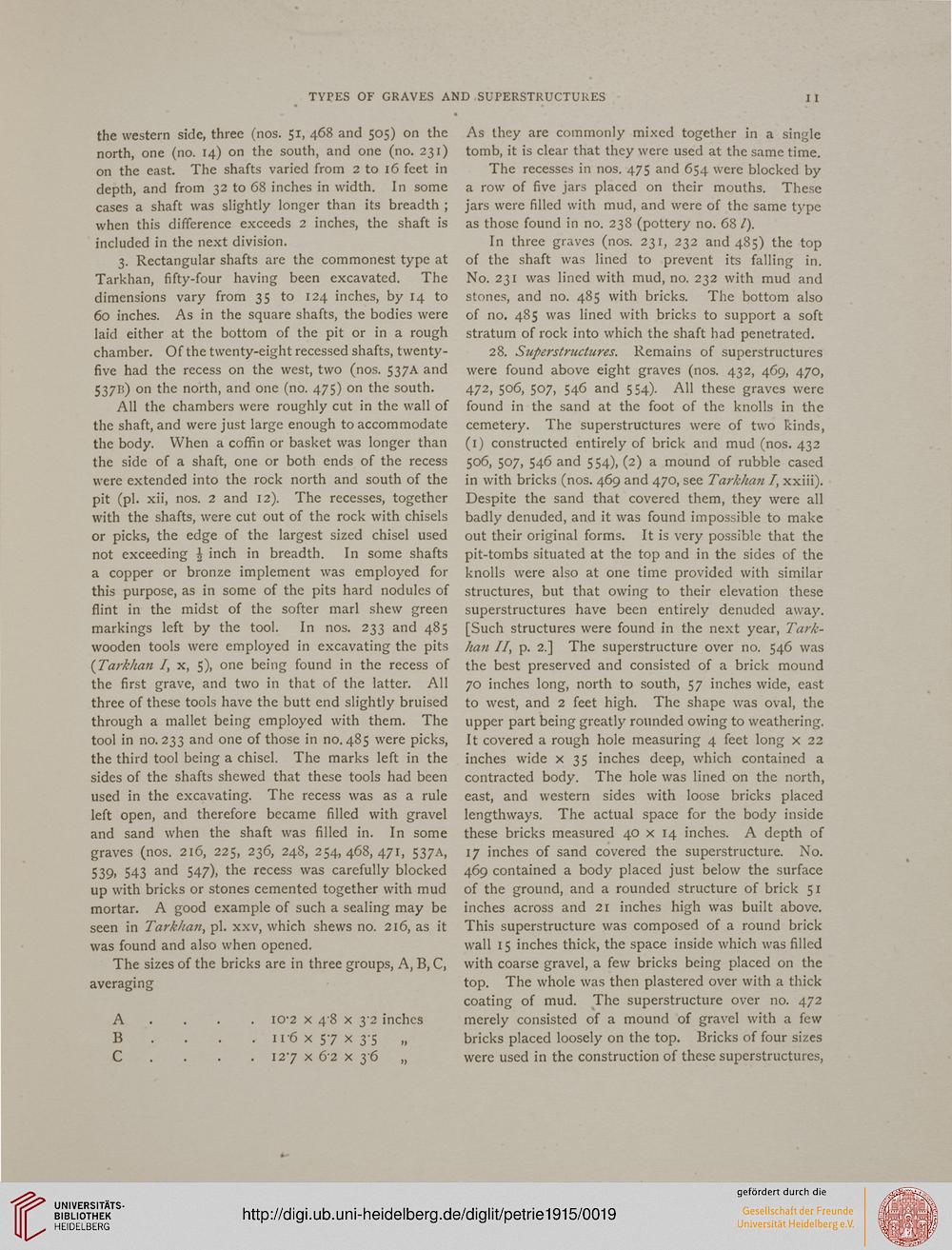 Information about OCR text
TYPES OF GRAVES AND SUPERSTRUCTURES

3. Rectangular shafts are the commonest type at
Tarkhan, fifty-four having been excavated, The
dimensions vary from 35 to 124 inches, by 14 to
60 inches. As in the square shafts, the bodies were
laid either at the bottom of the pit or in a rough
chamber. Of the twenty-eight recessed shafts, twenty-
five had the recess on the west, two (nos. 537A and
537H) on the north, and one (no. 475) on the south.

All the chambers were roughly cut in the wall of
the shaft, and were just large enough to accommodate
the body. When a coffin or basket was longer than
the side of a shaft, one or both ends of the recess
were extended into the rock north and south of the
pit (pi. xii, nos. 2 and 12). The recesses, together
with the shafts, were cut out of the rock with chisels
or picks, the edge of the largest sized chisel used
not exceeding J inch in breadth. In some shafts
a copper or bronze implement was employed for
this purpose, as in some of the pits hard nodules of
flint in the midst of the softer marl shew green
markings left by the tool. In nos. 233 and 485
wooden tools were employed in excavating the pits
{Tarkhan I, x, 5), one being found in the recess of
the first grave, and two in that of the latter. All
three of these tools have the butt end slightly bruised
through a mallet being employed with them. The
tool in no. 233 and one of those in no. 485 were picks,
the third tool being a chisel. The marks left in the
sides of the shafts shewed that these tools had been
used in the excavating. The recess was as a rule
left open, and therefore became filled with gravel
and sand when the shaft was filled in. In some
graves (nos. 216, 225, 236, 248, 254,468,471, 537A,
S39> 543 ana" 547X tne recess was carefully blocked
up with bricks or stones cemented together with mud
mortar. A good example of such a sealing may be
seen in Tarkhan, pi. xxv, which shews no. 216, as it
was found and also when opened.

The sizes of the bricks are in three groups, A, B, C,
averaging

As they are commonly mixed together in a single
tomb, it is clear that they were used at the same time.

28. Superstructures. Remains of superstructures
were found above eight graves (nos. 432, 469, 470,
472, 506, 507, 546 and 554). All these graves were
found in the sand at the foot of the knolls in the
cemetery. The superstructures were of two kinds,
(1) constructed entirely of brick and mud (nos. 432
506, 507, 546 and 554), (2) a mound of rubble cased
in with bricks (nos. 469 and 470, see Tarkhan I, xxiii).
Despite the sand that covered them, they were all
badly denuded, and it was found impossible to make
out their original forms. It is very possible that the
pit-tombs situated at the top and in the sides of the
knolls were also at one time provided with similar
structures, but that owing to their elevation these
superstructures have been entirely denuded away.
[Such structures were found in the next year, Tark-
han If, p. 2.] The superstructure over no. 546 was
the best preserved and consisted of a brick mound
70 inches long, north to south, 57 inches wide, east
to west, and 2 feet high. The shape was oval, the
upper part being greatly rounded owing to weathering,
It covered a rough hole measuring 4 feet long x 22
inches wide x 35 inches deep, which contained a
contracted body. The hole was lined on the north,
east, and western sides with loose bricks placed
lengthways. The actual space for the body inside
these bricks measured 40 x 14 inches. A depth of
17 inches of sand covered the superstructure. No.
469 contained a body placed just below the surface
of the ground, and a rounded structure of brick 51
inches across and 21 inches high was built above.
This superstructure was composed of a round brick
wall 15 inches thick, the space inside which was filled
with coarse gravel, a few bricks being placed on the
top. The whole was then plastered over with a thick
coating of mud. The superstructure over no. 472
merely consisted of a mound of gravel with a few
bricks placed loosely on the top. Bricks of four sizes
were used in the construction of these superstructures,