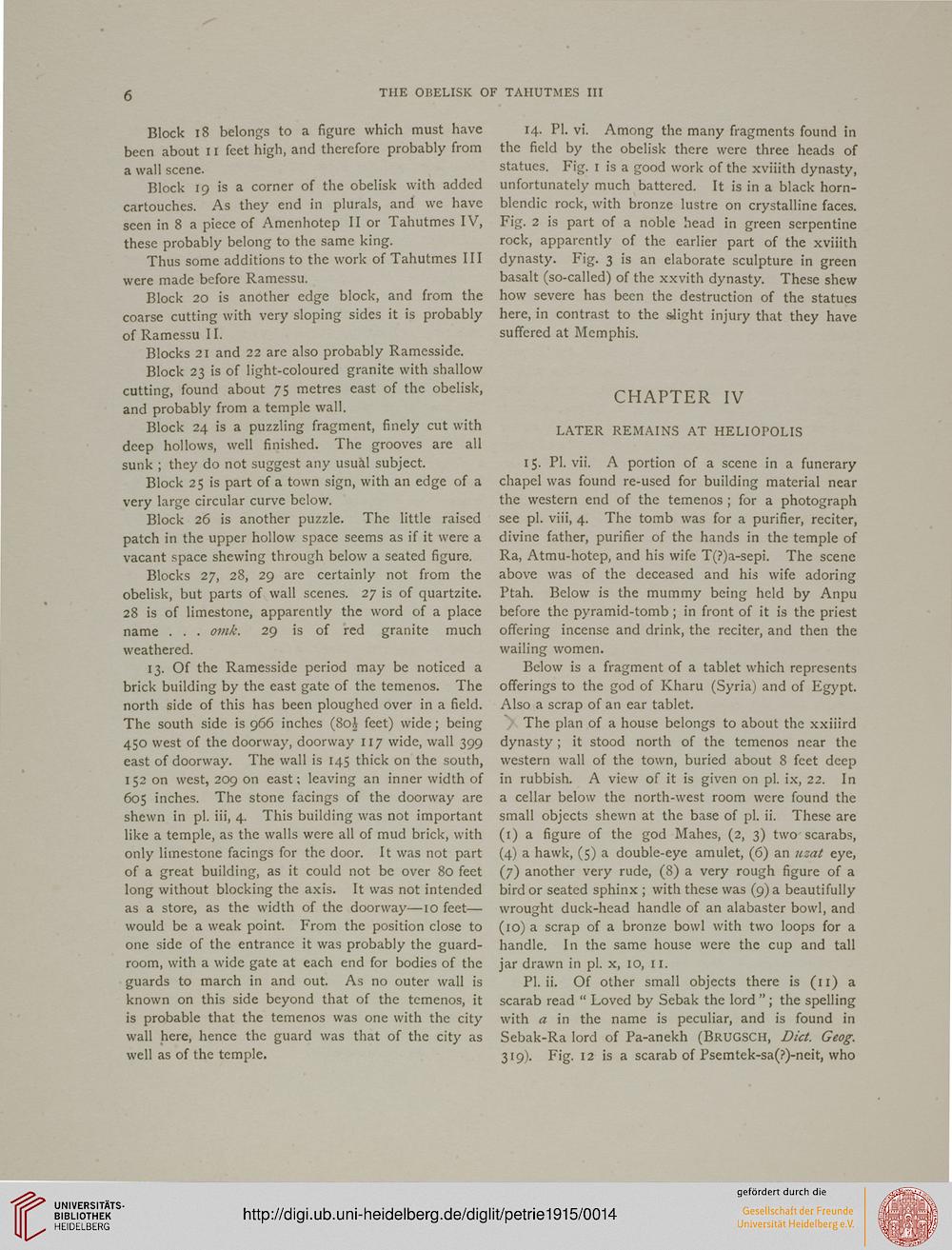 Information about OCR text
THE OBELISK OF TAHUTMES III

Block 18 belongs to a figure which must have
been about 11 feet high, and therefore probably from
a wall scene.

Block 19 is a corner of the obelisk with added
cartouches. As they end in plurals, and we have
seen in 8 a piece of Amenhotep II or Tahutmes IV,
these probably belong to the same king.

Thus some additions to the work of Tahutmes III
were made before Ramcssu.

Block 20 is another edge block, and from the
coarse cutting with very sloping sides it is probably
of Ramessu II.

Blocks 21 and 22 are also probably Ramesside.

Block 23 is of light-coloured granite with shallow
cutting, found about 75 metres east of the obelisk,
and probably from a temple wall.

Block 24 is a puzzling fragment, finely cut with
deep hollows, well finished. The grooves are all
sunk ; they do not suggest any usual subject.

Block 25 is part of a town sign, with an edge of a
very large circular curve below.

Block 26 is another puzzle. The little raised
patch in the upper hollow space seems as if it were a
vacant space shewing through below a seated figure.

13. Of the Ramesside period may be noticed a
brick building by the east gate of the temenos. The
north side of this has been ploughed over in a field.
The south side is 966 inches (8o£ feet) wide ; being
450 west of the doorway, doorway 117 wide, wall 399
east of doorway. The wall is 145 thick on the south,
152 on west, 209 on east; leaving an inner width of
605 inches. The stone facings of the doorway are
shewn in pi. iii, 4. This building was not important
like a temple, as the walls were all of mud brick, with
only limestone facings for the door. It was not part
of a great building, as it could not be over 80 feet
long without blocking the axis. It was not intended
as a store, as the width of the doorway—10 feet—
would be a weak point. From the position close to
one side of the entrance it was probably the guard-
room, with a wide gate at each end for bodies of the
guards to march in and out. As no outer wall is
known on this side beyond that of the temenos, it
is probable that the temenos was one with the city
wall here, hence the guard was that of the city as
well as of the temple.

14. Pi. vi. Among the many fragments found in
the field by the obelisk there were three heads of
statues. Fig. 1 is a good work of the xviiith dynasty,
unfortunately much battered. It is in a black horn-
blendic rock, with bronze lustre on crystalline faces.
Fig. 2 is part of a noble head in green serpentine
rock, apparently of the earlier part of the xviiith
dynasty. Fig. 3 is an elaborate sculpture in green
basalt (so-called) of the xxvith dynasty. These shew
how severe has been the destruction of the statues
here, in contrast to the slight injury that they have
suffered at Memphis.

15. PI. vii. A portion of a scene in a funerary
chapel was found re-used for building material near
the western end of the temenos ; for a photograph
see pi. viii, 4. The tomb was for a purifier, reciter,
divine father, purifier of the hands in the temple of
Ra, Atmu-hotep, and his wife T(?)a-sepi. The scene
above was of the deceased and his wife adoring
Ptah. Below is the mummy being held by Anpu
before the pyramid-tomb ; in front of it is the priest
offering incense and drink, the reciter, and then the
wailing women.

Below is a fragment of a tablet which represents
offerings to the god of Kharu (Syria) and of Egypt.
Also a scrap of an ear tablet.

The plan of a house belongs to about the xxiiird
dynasty; it stood north of the temenos near the
western wall of the town, buried about 8 feet deep
in rubbish. A view of it is given on pi. ix, 22. In
a cellar below the north-west room were found the
small objects shewn at the base of pi. ii. These are
(1) a figure of the god Mahes, (2, 3) two scarabs,
(4) a hawk, (5) a double-eye amulet, (6) an uzat eye,
(7) another very rude, (8) a very rough figure of a
bird or seated sphinx ; with these was {9) a beautifully
wrought duck-head handle of an alabaster bowl, and
(10) a scrap of a bronze bowl with two loops for a
handle. In the same house were the cup and tall
jar drawn in pi. x, 10, II.