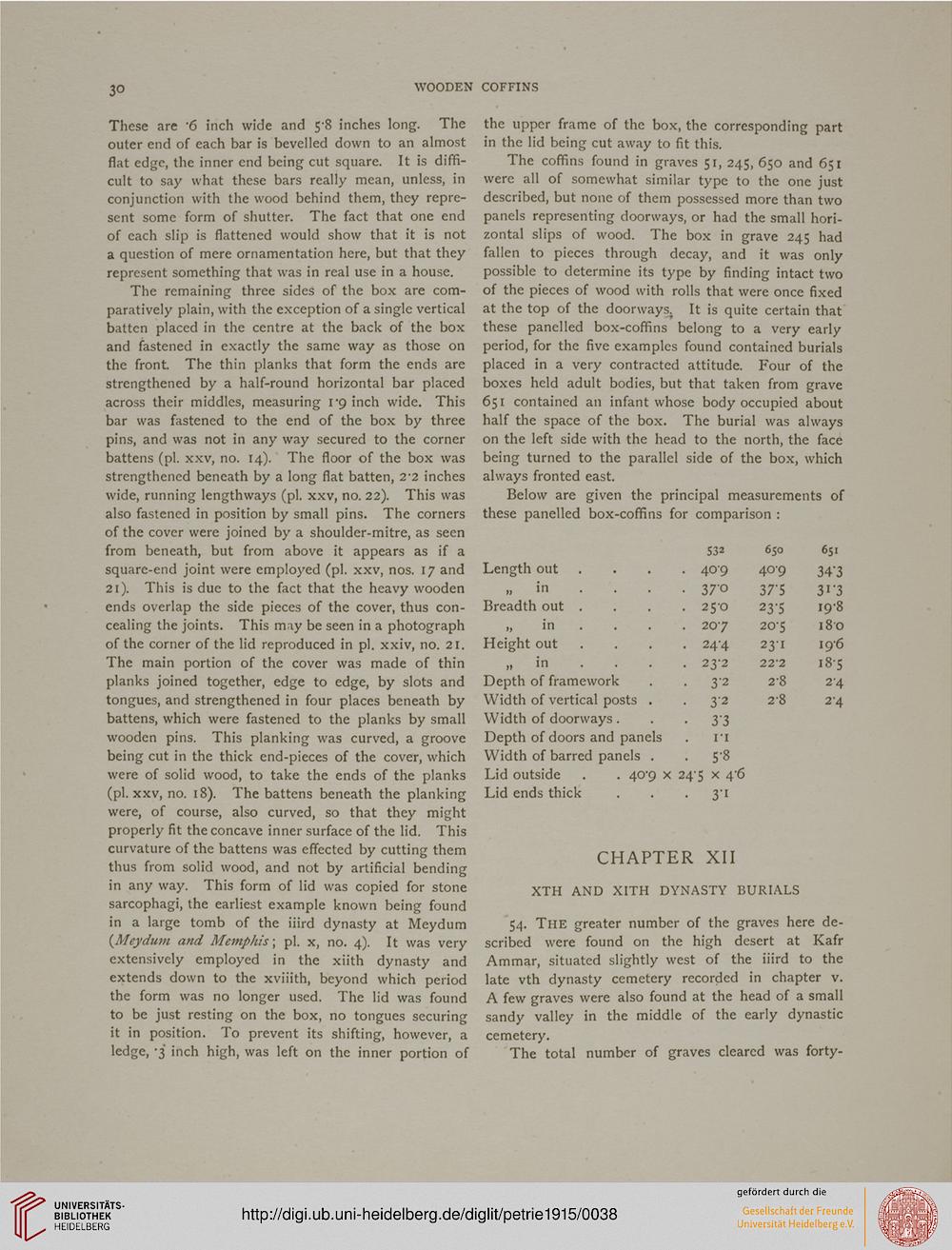 These are "6 inch wide and 5-8 inches long. The
outer end of each bar is bevelled down to an almost
flat edge, the inner end being cut square. It is diffi-
cult to say what these bars really mean, unless, in
conjunction with the wood behind them, they repre-
sent some form of shutter. The fact that one end
of each slip is flattened would show that it is not
a question of mere ornamentation here, but that they
represent something that was in real use in a house.

The remaining three sides of the box are com-
paratively plain, with the exception of a single vertical
batten placed in the centre at the back of the box
and fastened in exactly the same way as those on
the front The thin planks that form the ends are
strengthened by a half-round horizontal bar placed
across their middles, measuring 1 '9 inch wide. This
bar was fastened to the end of the box by three
pins, and was not in any way secured to the corner
battens (pi. xxv, no. 14). The floor of the box was
strengthened beneath by a long flat batten, 2'2 inches
wide, running lengthways (p!. xxv, no. 22). This was
also fastened in position by small pins. The corners
of the cover were joined by a shoulder-mitre, as seen
from beneath, but from above it appears as if a
square-end joint were employed (pi. xxv, nos. 17 and
2i). This is due to the fact that the heavy wooden
ends overlap the side pieces of the cover, thus con-
cealing the joints. This may be seen in a photograph
of the corner of the lid reproduced in pi. xxiv, no. 21.
The main portion of the cover was made of thin
planks joined together, edge to edge, by slots and
tongues, and strengthened in four places beneath by
battens, which were fastened to the planks by small
wooden pins. This planking was curved, a groove
being cut in the thick end-pieces of the cover, which
were of solid wood, to take the ends of the planks
(pi. xxv, no. 18). The battens beneath the planking
were, of course, also curved, so that they might
properly fit the concave inner surface of the lid. This
curvature of the battens was effected by cutting them
thus from solid wood, and not by artificial bending
in any way. This form of lid was copied for stone
sarcophagi, the earliest example known being found
in a large tomb of the iiird dynasty at Meydum
{Meydum and Memphis; pi. x, no. 4). It was very
extensively employed in the xiith dynasty and
extends down to the xviiith, beyond which period
the form was no longer used. The lid was found
to be just resting on the box, no tongues securing
it in position. To prevent its shifting, however, a
ledge, *3 inch high, was left on the inner portion of

the upper frame of the box, the corresponding part
in the lid being cut away to fit this.

The coffins found in graves 51, 245, 650 and 651
were all of somewhat similar type to the one just
described, but none of them possessed more than two
panels representing doorways, or had the small hori-
zontal slips of wood. The box in grave 245 had
fallen to pieces through decay, and it was only
possible to determine its type by finding intact two
of the pieces of wood with rolls that were once fixed
at the top of the doorways; It is quite certain that
these panelled box-coffins belong to a very early
period, for the five examples found contained burials
placed in a very contracted attitude. Four of the
boxes held adult bodies, but that taken from grave
651 contained an infant whose body occupied about
half the space of the box. The burial was always
on the left side with the head to the north, the face
being turned to the parallel side of the box, which
always fronted east.

Below are given the principal measurements of
these panelled box-coffins for comparison :

Depth of doors and pane

$4- The greater number of the graves here de-
scribed were found on the high desert at Kafr
Ammar, situated slightly west of the iiird to the
late vth dynasty cemetery recorded in chapter v.
A few graves were also found at the head of a small
sandy valley in the middle of the early dynastic
cemetery.

The total number of graves cleared was forty-