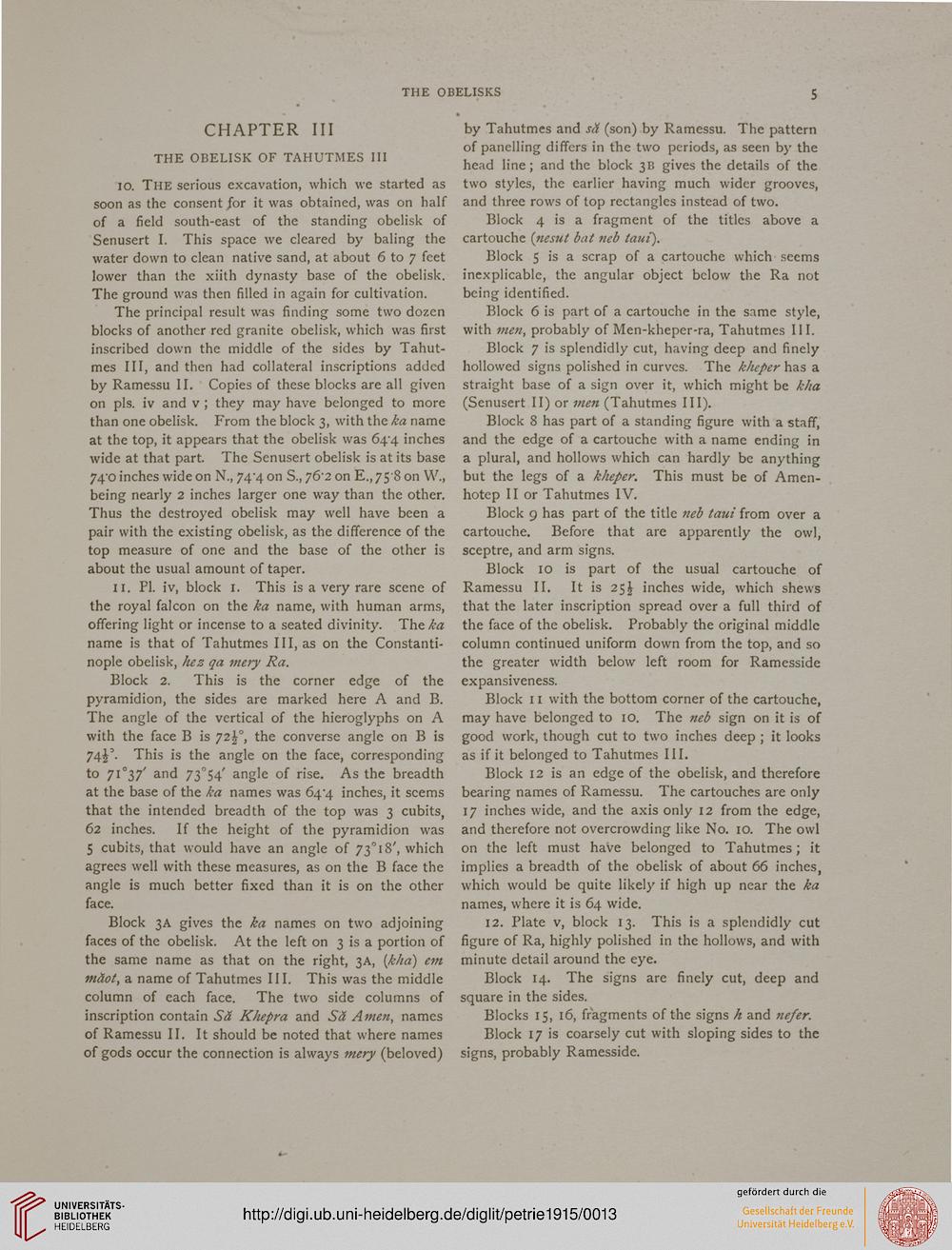 Information about OCR text
THE OBELISKS

THE OBELISK OF TAHUTMES III

10. The serious excavation, which we started as
soon as the consent /"or it was obtained, was on half
of a field south-east of the standing obelisk of
Senusert I. This space we cleared by baling the
water down to clean native sand, at about 6 to 7 feet
lower than the xiith dynasty base of the obelisk.
The ground was then filled in again for cultivation.

The principal result was finding some two dozen
blocks of another red granite obelisk, which was first
inscribed down the middle of the sides by Tahut-
mes III, and then had collateral inscriptions added
by Ramessu II. Copies of these blocks are all given
on pis. iv and v ; they may have belonged to more
than one obelisk. From the block 3, with the ka name
at the top, it appears that the obelisk was 64^4 inches
wide at that part. The Senusert obelisk is at its base
74'0 inches wide on N., 74'4 on S., y&2 on E„ 75*8 on W.,
being nearly 2 inches larger one way than the other.
Thus the destroyed obelisk may well have been a
pair with the existing obelisk, as the difference of the
top measure of one and the base of the other is
about the usual amount of taper.

11. PI. iv, block 1. This is a very rare scene of
the royal falcon on the ka name, with human arms,
offering light or incense to a seated divinity. The £3
name is that of Tahutmes III, as on the Constanti-
nople obelisk, hez qa mery Ra.

Block 2. This is the corner edge of the
pyramidion, the sides are marked here A and B.
The angle of the vertical of the hieroglyphs on A
with the face B is 72^", the converse angle on B is
74^'. This is the angle on the face, corresponding
to 7i°37' and 73°54' angle of rise. As the breadth
at the base of the ka names was 64^4 inches, it seems
that the intended breadth of the top was 3 cubits,
62 inches. If the height of the pyramidion was
5 cubits, that would have an angle of 73018', which
agrees well with these measures, as on the B face the
angle is much better fixed than it is on the other
face.

Block 3A gives the ka names on two adjoining
faces of the obelisk, At the left on 3 is a portion of
the same name as that on the right, 3A, {k/ia) em
m&ot, a name of Tahutmes III. This was the middle
column of each face. The two side columns of
inscription contain Sd Khepra and S3 Amen, names
of Ramessu II. It should be noted that where names
of gods occur the connection is always mery (beloved)

by Tahutmes and s<t (son) by Ramessu. The pattern
of panelling differs in the two periods, as seen by the
head line; and the block 3B gives the details of the
two styles, the earlier having much wider grooves,
and three rows of top rectangles instead of two.

Block 4 is a fragment of the titles above a
cartouche (nesut bat neb taut).

Block 5 is a scrap of a cartouche which seems
inexplicable, the angular object below the Ra not
being identified.

Block 6 is part of a cartouche in the sime style,
with men, probably of Men-kheper-ra, Tahutmes III.

Block 7 is splendidly cut, having deep and finely
hollowed signs polished in curves. The kheper has a
straight base of a sign over it, which might be kha
(Senusert II) or men (Tahutmes III).

Block 8 has part of a standing figure with a staff,
and the edge of a cartouche with a name ending in
a plural, and hollows which can hardly be anything
but the legs of a kheper. This must be of Amen-
hotcp II or Tahutmes IV.

Block 9 has part of the title neb taut from over a
cartouche. Before that are apparently the owl,
sceptre, and arm signs.

Block 10 is part of the usual cartouche of
Ramessu II. It is 25J inches wide, which shews
that the later inscription spread over a full third of
the face of the obelisk. Probably the original middle
column continued uniform down from the top, and so
the greater width below left room for Ramesside
expansiveness.

Block 11 with the bottom corner of the cartouche,
may have belonged to 10. The neb sign on it is of
good work, though cut to two inches deep ; it looks
as if it belonged to Tahutmes III.

Block 12 is an edge of the obelisk, and therefore
bearing names of Ramessu. The cartouches are only
17 inches wide, and the axis only 12 from the edge,
and therefore not overcrowding like No. 10. The owl
on the left must have belonged to Tahutmes; it
implies a breadth of the obelisk of about 66 inches,
which would be quite likely if high up near the ka
names, where it is 64 wide.

12. Plate v, block 13. This is a splendidly cut
figure of Ra, highly polished in the hollows, and with
minute detail around the eye.

Block 14. The signs are finely cut, deep and
square in the sides.

Block 17 is coarsely cut with sloping sides to the
signs, probably Ramesside.