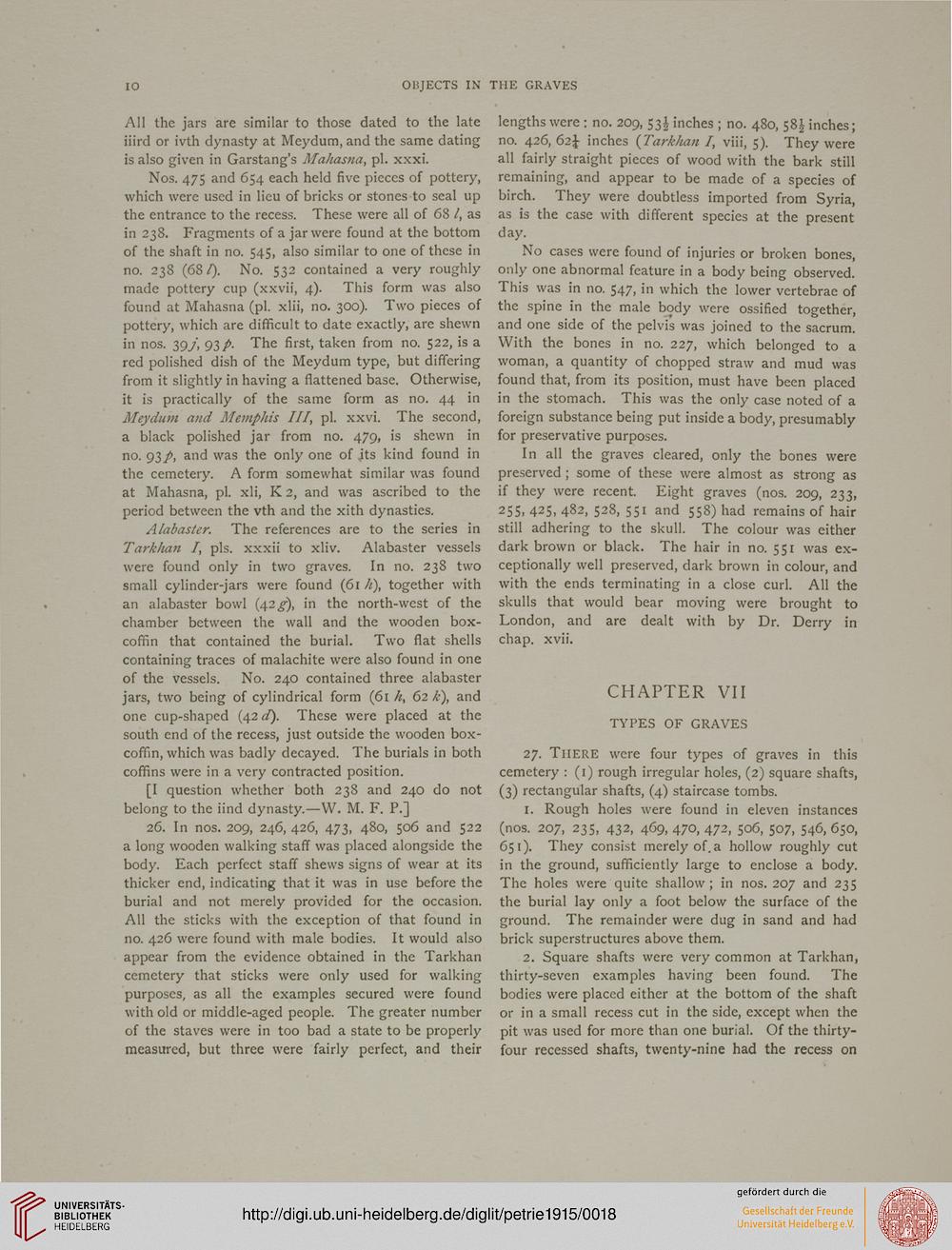 All the jars are similar to those dated to the late
iiird or ivth dynasty at Meydum, and the same dating
is also given in Garstang's Mahasna, pi. xxxi.

Nos. 475 and 654 each held five pieces of pottery,
which were used in lieu of bricks or stones to seal up
the entrance to the recess. These were all of 68 /, as
in 238. Fragments of a jar were found at the bottom
of the shaft in no. 545, also similar to one of these in
no. 238 (68/). No. 532 contained a very roughly
made pottery cup (xxvii, 4). This form was also
found at Mahasna (pi. xlii, no. 300). Two pieces of
pottery, which are difficult to date exactly, arc shewn
in nos. 397', 93/. The first, taken from no. 522, is a
red polished dish of the Meydum type, but differing
from it slightly in having a flattened base. Otherwise,
it is practically of the same form as no. 44 in
Meydum and Memphis III, pi. xxvi. The second,
a black polished jar from no. 479, is shewn in
no. 93/, and was the only one of jts kind found in
the cemetery. A form somewhat similar was found
at Mahasna, pi. xli, K 2, and was ascribed to the
period between the vth and the xith dynasties.

Alabaster. The references are to the series in
Tarkhan I, pis. xxxii to xliv. Alabaster vessels
were found only in two graves. In no. 23S two
small cylinder-jars were found (61/;), together with
an alabaster bowl (42^), in the north-west of the
chamber between the wall and the wooden box-
coffin that contained the burial. Two flat shells
containing traces of malachite were also found in one
of the vessels. No. 240 contained three alabaster
jars, two being of cylindrical form (61 h, 62 ft), and
one cup-shaped (42 d). These were placed at the
south end of the recess, just outside the wooden box-
coffin, which was badly decayed. The burials in both
coffins were in a very contracted position.

26. In nos. 209, 246, 426, 473, 480, 506 and 522
a long wooden walking staff was placed alongside the
body. Each perfect staff shews signs of wear at its
thicker end, indicating that it was in use before the
burial and not merely provided for the occasion.
All the sticks with the exception of that found in
no. 426 were found with male bodies. It would also
appear from the evidence obtained in the Tarkhan
cemetery that sticks were only used for walking
purposes, as all the examples secured were found
with old or middle-aged people. The greater number
of the staves were in too bad a state to be properly
measured, but three were fairly perfect, and their

lengths were : no. 209, 53$ inches ; no. 480, 58^ inches;
no. 426, 62J inches {Tarkhan I, viii, 5). They were
all fairly straight pieces of wood with the bark still
remaining, and appear to be made of a species of
birch. They were doubtless imported from Syria,
as is the case with different species at the present
day.

No cases were found of injuries or broken bones,
only one abnormal feature in a body being observed.
This was in no. 547, in which the lower vertebrae of
the spine in the male body were ossified together,
and one side of the pelvis was joined to the sacrum.
With the bones in no. 227, which belonged to a
woman, a quantity of chopped straw and mud was
found that, from its position, must have been placed
in the stomach. This was the only case noted of a
foreign substance being put inside a body, presumably
for preservative purposes.

In all the graves cleared, only the bones were
preserved ; some of these were almost as strong as
if they were recent. Eight graves (nos. 209, 233,
255, 425, 4S2, 528, ssi and 55S) had remains of hair
still adhering to the skull. The colour was either
dark brown or black. The hair in no. 551 was ex-
ceptionally well preserved, dark brown in colour, and
with the ends terminating in a close curl. All the
skulls that would bear moving were brought to
London, and are dealt with by Dr. Derry in
chap. xvii.

2. Square shafts were very common at Tarkhan,
thirty-seven examples having been found. The
bodies were placed either at the bottom of the shaft
or in a small recess cut in the side, except when the
pit was used for more than one burial. Of the thirty-
four recessed shafts, twenty-nine had the recess on