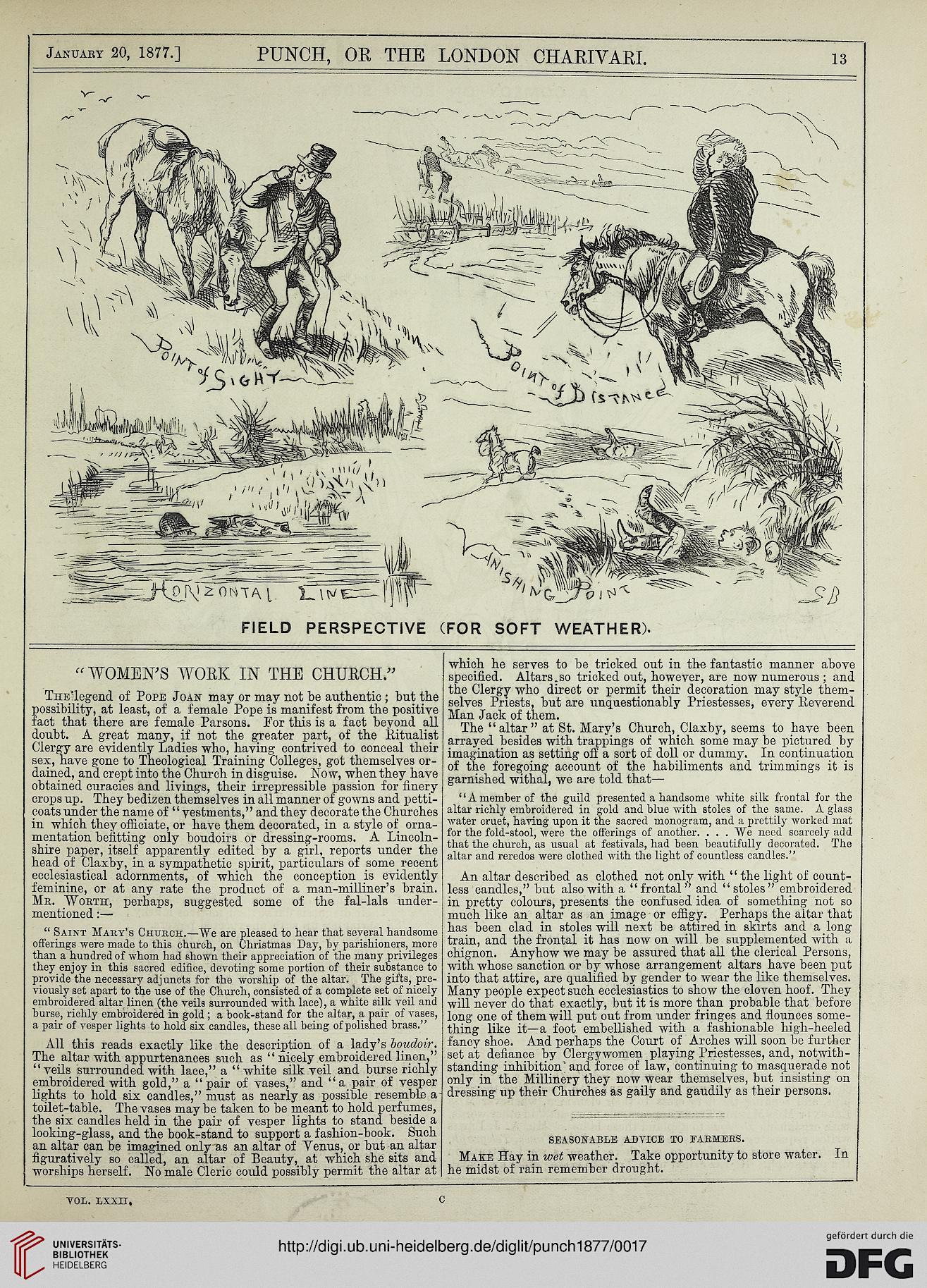 "WOMEN'S WOEK IN THE CHURCH."

The legend of Pope Joan may or may not be authentic ; but the
possibility, at least, of a female Pope is manifest from the positive
fact that there are female Parsons. For this is a fact beyond all
doubt. A great many, if not the greater part, of the Ritualist
Clergy are evidently Ladies who, having contrived to conceal their
sex, have gone to Theological Training Colleges, got themselves or-
dained, and crept into the Church in disguise. Now, when they have
obtained curacies and livings, their irrepressible passion for finery
crops up. They bedizen themselves in all manner of gowns and petti-
coats under the name of "vestments," and they decorate the Churches
in which they officiate, or have them decorated, in a style of orna-
mentation befitting only boudoirs or dressing-rooms. A Lincoln-
shire paper, itself apparently edited by a girl, reports under the
head of Claxby, in a sympathetic spirit, particulars of some recent
ecclesiastical adornments, of which the conception is evidently
feminine, or at any rate the product of a man-milliner's brain.
Me. Worth, perhaps, suggested some of the fal-lals under-
mentioned :—

" Saint Mary's Church.—"We are pleased to hear that several handsome
offerings were made to this church, on Christmas Day, by parishioners, more
than a hundred of whom had shown their appreciation of the many privileges
they enjoy in this sacred edifice, devoting some portion of their substance to
provide the necessary adjuncts for the worship of the altar. The gifts, pre-
viously set apart to the use of the Church, consisted of a complete set of nicely
embroidered altar linen (the veils surrounded with lace), a white silk veil and
burse, richly embroidered in gold ; a book-stand for the altar, a pair of vases,
a pair of vesper lights to hold six candles, these all being of polished brass."

All this reads exactly like the description of a lady's boudoir.
The altar with appurtenances such as " nicely embroidered linen,"
"veils surrounded with lace," a " white silk veil and burse richly
embroidered with gold," a "pair of vases," and "a pair of vesper
lights to hold six candles," must as nearly as possible resemble a
toilet-table. The vases maybe taken to be meant to hold perfumes,
the six candles held in the pair of vesper lights to stand beside a
looking-glass, and the book-stand to support a fashion-book. Such
an altar can be imagined only as an altar of Venus, or but an altar
figuratively so called, an altar of Beauty, at which she sits and
worships herself. No male Cleric cotdd possibly permit the altar at

which he serves to be tricked out in the fantastic manner above
specified. Altars.so tricked out, however, are now numerous ; and
the Clergy who direct or permit their decoration may style them-
selves Priests, but are unquestionably Priestesses, every Reverend
Man Jack of them.

The "altar" at St. Mary's Church, Claxby, seems to have been
arrayed besides with trappings of which some may be pictured by
imagination as setting off a sort of doll or dummy. In continuation
of the foregoing account of the habiliments and trimmings it is
garnished withal, we are told that—

'' A member of the guild presented a handsome white silk frontal for the
altar richly embroidered in gold and blue with stoles of the same. A glass
water cruet, having upon it the sacred monogram, and a prettily worked mat
for the fold-stool, were the offerings of another. . . . "We need scarcely add
that the church, as usual at festivals, had been beautifully decorated. The
altar and reredos were clothed with the light of countless candles."

An altar described as clothed not only with " the light of count-
less candles," but also with a "frontal" and "stoles" embroidered
in pretty colours, presents the confused idea of something not so
much like an altar as an image or effigy. Perhaps the altar that
has been clad in stoles will next be attired in skirts and a long
train, and the frontal it has now on will be supplemented with a
chignon. Anyhow we may be assured that all the clerical Persons,
with whose sanction or by whose arrangement altars have been put
into that attire, are qualified by gender to wear the like themselves.
Many people expect such ecclesiastics to show the cloven hoof. They
will never do that exactly, but it is more than probable that before
long one of them will put out from under fringes and flounces some-
thing like it—a foot embellished with a fashionable high-heeled
fancy shoe. And perhaps the Court of Arches will soon be further
set at defiance by Clergy women playing Priestesses, and, notwith -
standing inhibition* and force of law, continuing to masquerade not
only in the Millinery they now wear themselves, but insisting on
dressing up their Churches as gaily and gaudily as their persons.