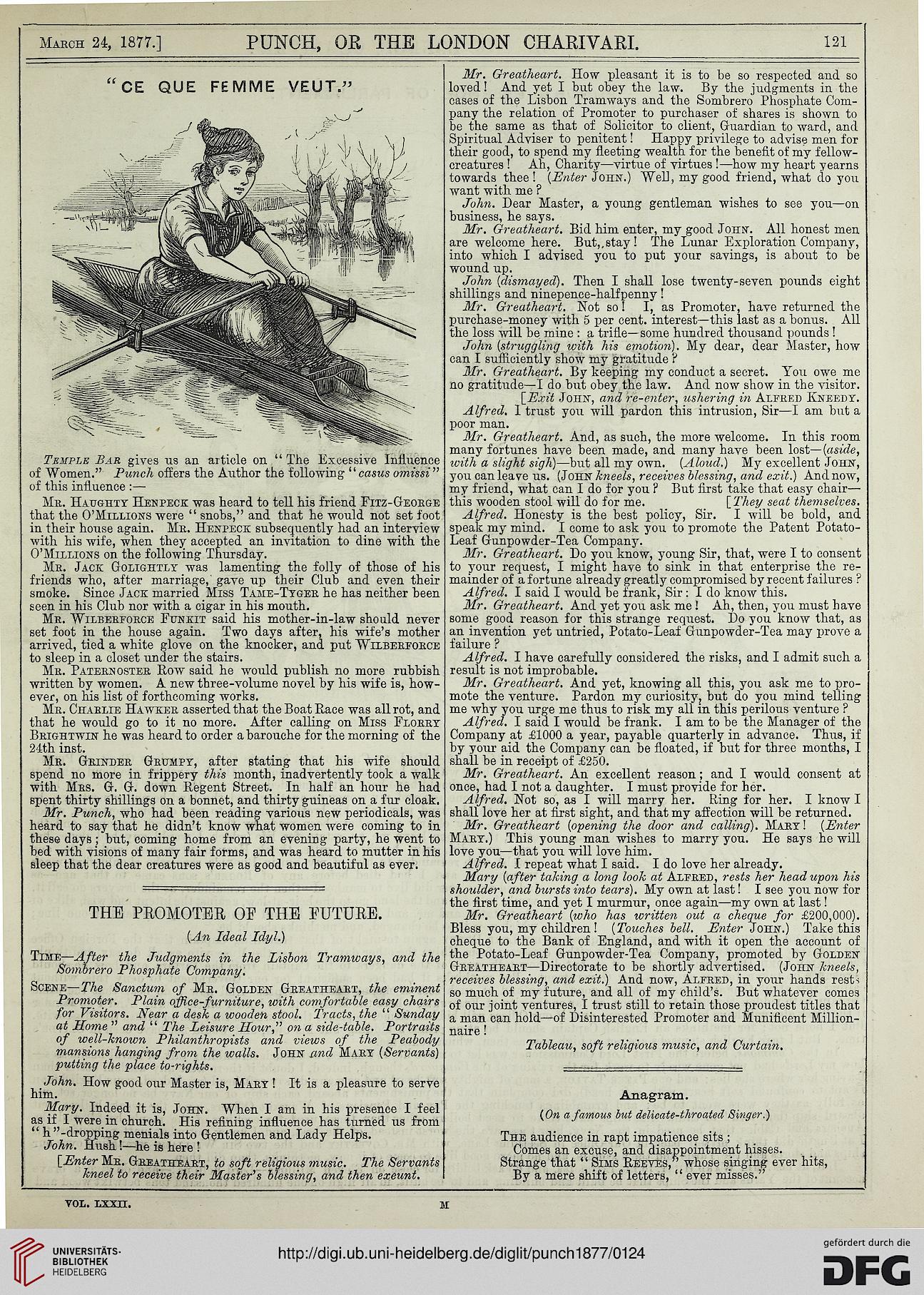 Temple Bar gives us an article on " The Excessive Influence
of Women." Punch offers the Author the following ''''casus omissi "
of this influence :—

Mr. Haughty Henpeck was heard to tell his friend Fitz-George
that the O'Millions were " snobs," and that he would not set foot
in their house again. Mr. Henpeck subsequently had an interview
with his wife, when they accepted an invitation to dine with the
O'Millions on the following Thursday.

Me. Jack Golightly was lamenting the folly of those of his
friends who, after marriage, gave up their Club and even their
smoke. Since Jack married Miss Tame-Tyger he has neither been
seen in his Club nor with a cigar in his mouth.

Mr. Wilbebfoece Funkit said his mother-in-law should never
set foot in the house again. Two days after, his wife's mother
arrived, tied a white glove on the knocker, and put Wilbebfoece
to sleep in a closet under the stairs.

Mr. Paternoster Row said he would publish no more rubbish
written by women. A new three-volume novel by his wife is, how-
ever, on his list of forthcoming works.

Mr. Chablie Hawker asserted that the Boat Peace was all rot, and
that he would go to it no more. After calling on Miss Floery
Bbightwin he was heard to order a barouche for the morning of the
24th inst.

Me. Grinder Grumpy, after stating that his wife should
spend no more in frippery this month, inadvertently took a walk
with Mrs. G. G. down Regent Street. In half an hour he had
spent thirty shillings on a bonnet, and thirty guineas on a fur cloak.

Mr. Punch, who had been reading various new periodicals, was
heard to say that he didn't know what women were coming to in
these days ; but, coming home from an evening party, he went to
bed with visions of many fair forms, and was heard to mutter in his
sleep that the dear creatures were as good and beautiful as ever.

THE PROMOTES OE THE EUTURE.

Time—After the Judgments in the lisbon Tramways, and the
Sombrero Phosphate Company.

Scene—The Sanctum of Mr. Golden Gbeatheabt, the eminent
Promoter. Plain office-furniture, with comfortable easy chairs
for Visitors. Near a desk a wooden stool. Tracts, the " Sunday
at Home " and The Leisure Hour," on a side-table. Portraits
of well-known Philanthropists and views of the Peabody
mansions hanging from the walls. John and Maey {Servants)
putting the place to-rights.

John. How good our Master is, Maey ! It is a pleasure to serve
him.

Mary. Indeed it is, John. When I am in his presence I feel
as if I were in church. His refining influence has turned us from
" h "-dropping menials into Gentlemen and Lady Helps.
John. Hush!—he is here !

{Enter Me. Greatheaet, to soft religious music. The Servants
kneel to receive their Master's blessing, and then exeunt.

Mr. Greatheart. How pleasant it is to be so respected and so
loved! And yet I but obey the law. By the judgments in the
cases of the Lisbon Tramways and the Sombrero Phosphate Com-
pany the relation of Promoter to purchaser of shares is shown to
be the same as that of Solicitor to client, Guardian to ward, and
Spiritual Adviser to penitent! Happy privilege to advise men for
their good, to spend my fleeting wealth for the benefit of my fellow-
creatures ! Ah, Charity—virtue of virtues !—how my heart yearns
towards thee ! {Enter John.) Well, my good friend, what do you
want with me ?

Mr. Greatheart. Bid him enter, my good John. All honest men
are welcome here. But,,stay! The Lunar Exploration Company,
into which I advised you to put your savings, is about to be
wound up.

John {dismayed). Then I shall lose twenty-seven pounds eight
shillings and ninepence-halfpenny!

Mr. Greatheart. Not so! I, as Promoter, have returned the
purchase-money with 5 per cent, interest—this last as a bonus. All
the loss will be mine : a trifle—some hundred thousand pounds !

John {struggling ivith his emotion). My dear, dear Master, how
can I sufficiently show my gratitude ?

Mr. Greatheart. By keeping my conduct a secret. You owe me
no gratitude—I do but obey the law. And now show in the visitor.

Alfred. 1 trust you will pardon this intrusion, Sir—I am but a
poor man.

Mr. Greatheart. And, as such, the more welcome. In this room
many fortunes have been made, and many have been lost—{aside,
with a slight sigh)—but all my own. {Aloud.) My excellent John,
you can leave us. (John kneels, receives blessing, and exit.) And now,
my friend, what can I do for you ? But first take that easy chair—
this wooden stool will do for me. [They seat themselves.

Alfred. Honesty is the best policy, Sir. I will be bold, and
speak my mind. I come to ask you to promote the Patent Potato-
Leaf Gunpowder-Tea Company.

Mr. Greatheart. Do you know, young Sir, that, were I to consent
to your request, I might have to sink in that enterprise the re-
mainder of a fortune already greatly compromised by recent failures ?

Alfred. I said I would be frank, Sir : I do know this.

Mr. Greatheart. And yet you ask me ! Ah, then, you must have
some good reason for this strange request. Do you know that, as
an invention yet untried, Potato-Leaf Gunpowder-Tea may prove a
failure ?

Alfred. I have carefully considered the risks, and I admit such a
result is not improbable.

Mr. Greatheart. And yet, knowing all this, you ask me to pro-
mote the venture. Pardon my curiosity, but do you mind telling
me why you urge me thus to risk my all in this perilous venture ?

Alfred. I said I would be frank. I am to be the Manager of the
Company at £1000 a year, payable quarterly in advance. Thus, if
by your aid the Company can be floated, if but for three months, I
shall be in receipt of £250.

Mr. Greatheart. An excellent reason; and I would consent at
once, had I not a daughter. I must provide for her.

Alfred. Not so, as I will marry her. Ring for her. I know I
shaU love her at first sight, and that my affection will be returned.

Mr. Greatheart {opening the door and calling). Mary! {Enter
Mary.) This young man wishes to marry you. He says he will
love you—that you will love him.

Alfred. I repeat what I said. I do love her already.

Mary {after taking_ a long look at Alfred, rests her head upon his
shoulder, and bursts into tears). My own at last! I see you now for
the first time, and yet I murmur, once again—my own at last!

Mr. Greatheart {who has written out a cheque for £200,000).
Bless you, my children ! {Touches bell. Enter John.) Take this
cheque to the Bank of England, and with it open the account of
the Potato-Leaf Gunpowder-Tea Company, promoted by Golden
Greatheart—Directorate to be shortly advertised. (John kneels,
receives blessing, and exit.) And now, Alfred, in your hands rests
so much of my future, and all of my child's. But whatever comes
of our joint ventures, I trust still to retain those proudest titles that
a man can hold—of Disinterested Promoter and Munificent Million-
naire !

{On a famous but delicate-throated Singer.)

The audience in rapt impatience sits ;

Comes an excuse, and disappointment hisses.
Strange that " Sims Reeves, whose singing ever hits,

By a mere shift of letters, " ever misses."