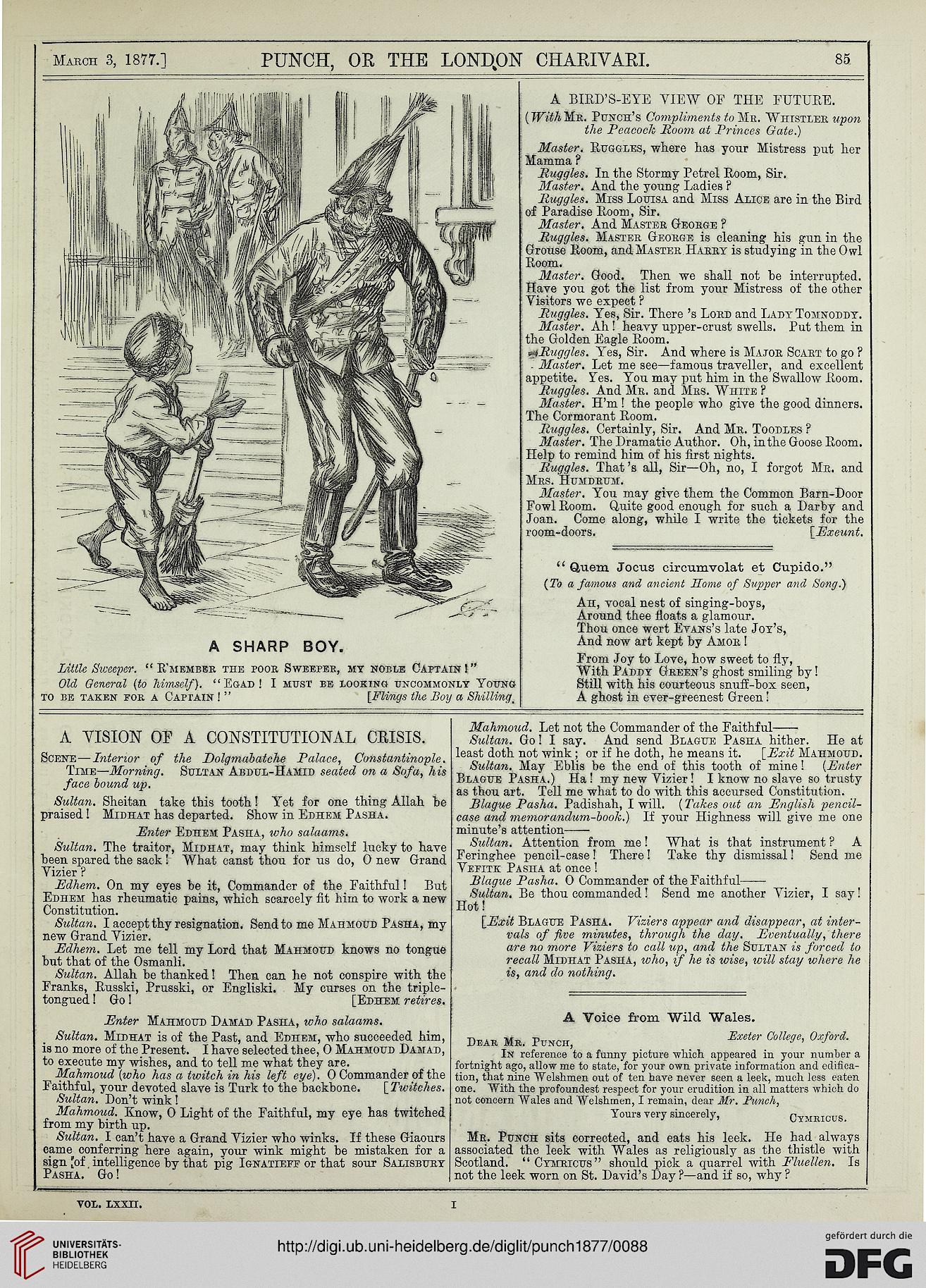 Little Sweeper. " R'member the poor Sweeper, my noble Captain !"
Old General (to himself). "Egad! I must be looking uncommonly Young
to be taken for a Captain ! " [Flings the Boy a Shilling,

A BIRD'S-EYE VIEW OF THE FUTURE.

{WithWs.. Punch's Compliments to Mr. "Whistler upon
the Peacock Room at Princes Gate.)

Master. Ruggles, where lias your Mistress put her
Mamma ?

Ruggles. Master George is cleaning his gun in the
Grouse Room, and Master Harry is studying in the Owl
Room.

Master. Good. Then we shall not be interrupted.
Have you got the list from your Mistress of the other
Visitors we expect ?

^Ruggles. Yes, Sir. And where is Major Scart to go ?
. Master. Let me see—famous traveller, and excellent
appetite. Yes. You may put him in the Swallow Room.

Master. H'm ! the people who give the good dinners.
The Cormorant Room.

Master. The Dramatic Author. Oh, in the Goose Room.
Help to remind him of his first nights.

Master. You may give them the Common Barn-Door
Fowl Room. Quite good enough for such a Darby and
Joan. Come along, while I write the tickets for the
room-doors. [Exeunt.

(To a famous and ancient Home of Supper and Song.)

Ah, vocal nest of singing-boys,
Around thee floats a glamour.
Thou once wert Evans's late Joy's,
And now art kept by Amor !

From Joy to Love, how sweet to fly,
With Paddy Green's ghost smiling by!
Still with his courteous snuff-box seen,
A ghost in ever-greenest Green!

A VISION OP A CONSTITUTIONAL CRISIS.

Sultan. Sheitan take this tooth! Yet for one thing Allah be
praised! Midhat has departed. Show in Edhem Pasha.

Enter Edhem Pasha, who salaams.
Sultan. The traitor, Midhat, may think himself lucky to have
been spared the sack ! What canst thou for us do, 0 new Grand
Vizier ?

Edhem. On my eyes be it, Commander of the Faithful! But
Edhem has rheumatic pains, which scarcely fit him to work a new
Constitution.

Sultan. I accept thy resignation. Send to me Mahmoud Pasha, my
new Grand Vizier.

Edhem. Let me tell my Lord that Mahmoud knows no tongue
but that of the Osmanli.

Sultan. Allah be thanked! Then can he not conspire with the
Franks, Ptusski, Prusski, or Engliski. My curses on the triple-
tongued! Go! [Edhem retires.

Sultan. Midhat is of the Past, and Edhem, who succeeded him,
is no more of the Present. I have selected thee, 0 Mahmoud Damad,
to execute my wishes, and to tell me what they are.

Mahmoud {who has a twitch in his left eye). 0 Commander of the
Faithful, your devoted slave is Turk to the backbone. [Twitches.

Mahmoud. Know, 0 Light of the Faithful, my eye has twitched
from my birth up.

Sultan. I can't have a Grand Vizier who winks. If these Giaours
came^ conferring here again, your wink might be mistaken for a

Mahmoud. Let not the Commander of the Faithful-

Sultan. Go! I say. And send Blague Pasha hither. He at
least doth not wink ; or if he doth, he means it. [Exit Mahmoud.

Sultan. May Eblis be the end of this tooth of mine ! [Enter
Blague Pasha.) Ha! my new Vizier! I know no slave so trusty
as thou art. Tell me what to do with this accursed Constitution.

Plague Pasha. Padishah, I will. {Takes out an English pencil-
case and memorandum-book.) If your Highness will give me one
minute's attention-

Sultan. Attention from me! What is that instrument ? A
Feringhee pencil-case ! There ! Take thy dismissal! Send me
Vefitk Pasha at once !

Blague Pasha. 0 Commander of the Faithful-

Sultan. Be thou commanded! Send me another Vizier, I say!
Hot!

[Exit Blague Pasha. Viziers appear and disappear, at inter-
vals of five minutes, through the day. Eventually, there
are no more Viziers to call up, and the Sultan is forced to
recall Midhat Pasha, who, if he is wise, will stay where he
is, and do nothing.

A Voice from Wild Wales.

In reference to a funny picture which appeared in your number a
fortnight ago, allow me to state, for your own private information and edifica-
tion, that nine Welshmen out of ten have never seen a leek, much less eaten
one. With the profoundest respect for your erudition in all matters which do
not concern Wales and Welshmen, I remain, dear Mr. Punch,

Mr. Punch sits corrected, and eats his leek. He had always
associated the leek with Wales as religiously as the thistle with

sign [of intelligence by that pig Ignatiefe or that sour Salisbury Scotland. "Cymricus" should pick a quarrel with Eluellen. Is
Pasha. Go ! | not the leek worn on St. David's Day ?—and if so, why P