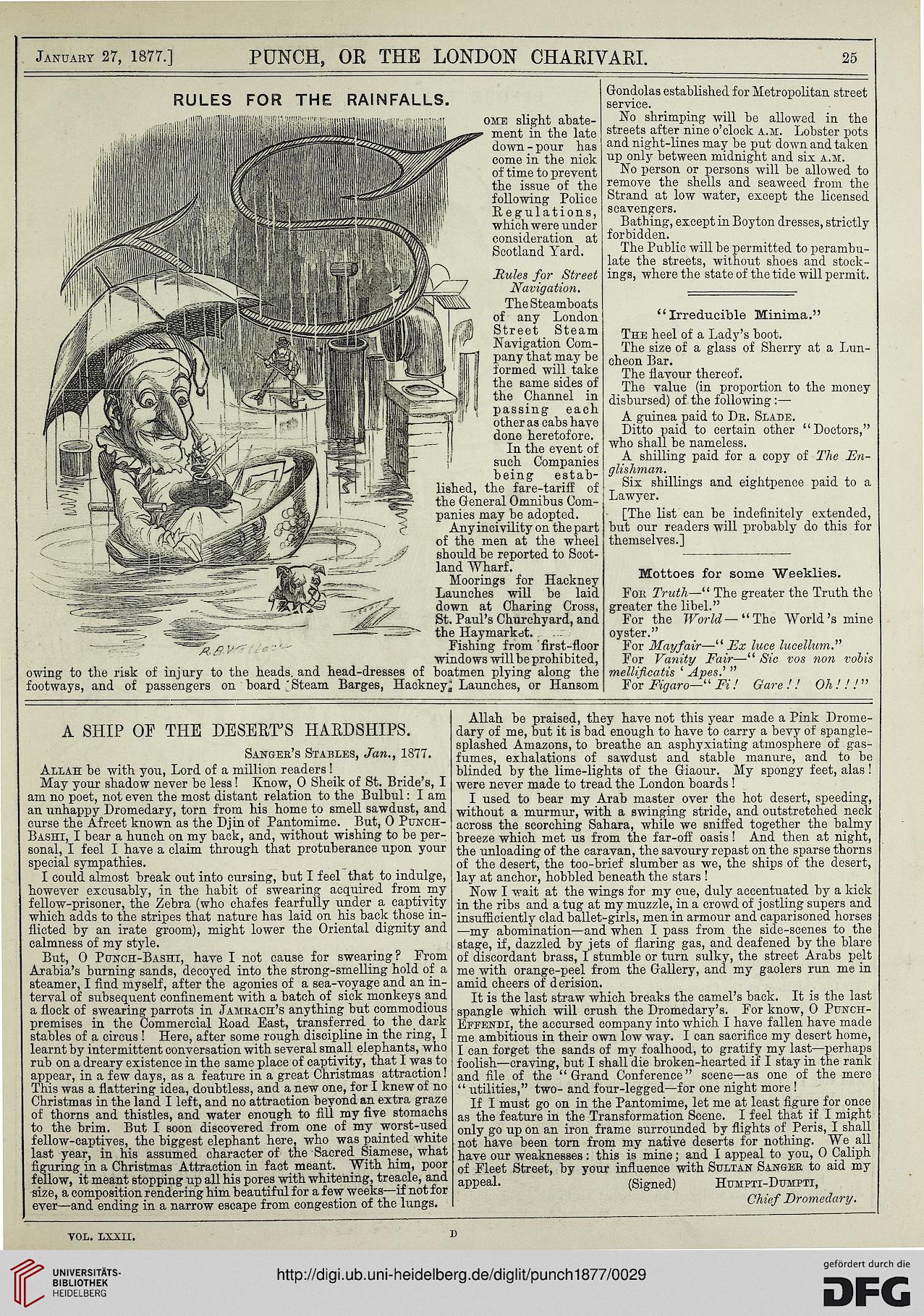 RULES FOR THE RAINFALLS.

ome slight abate-
ment in the late
down - pour has
come in the nick
of time to prevent
the issue of the
following Police
Regulations,
which were under
consideration at
Scotland Yard.

Rules for Street
Navigation.
The Steamboats
of any London
Street Steam
Navigation Com-
pany that may be
formed will take
the same sides of
the Channel in
passing each
other as cabs have
done heretofore.

In the event of
such Companies
being estab-
lished, the fare-tariff of
the General Omnibus Com-
panies may be adopted.

Any incivility on the part
of the men at the wheel
should be reported to Scot-
land Wharf.

Moorings for Hackney
Launches will be laid
down at Charing Cross,
St. Paul's Churchyard, and
the Haymarket.
/• • - Fishing from'first-floor

windows will be prohibited,
owing to the risk of injury to the heads, and head-dresses of boatmen plying along the
footways, and of passengers on board 'Steam Barges, Hackney; Launches, or Hansom

No shrimping will be allowed in the
streets after nine o'clock a.m. Lobster pots
and night-lines may be put down and taken
up only between midnight and six a.ii.

No person or persons will be allowed to
remove the shells and seaweed from the
Strand at low water, except the licensed
scavengers.

The Public will be permitted to perambu-
late the streets, without shoes and stock-
ings, where the state of the tide will permit.

The heel of a Lady's boot.
The size of a glass of Sherry at a Lun-
cheon Bar.
The flavour thereof.

The value (in proportion to the money
disbursed) of the following :—

A guinea paid to De. Slade.

Ditto paid to certain other "Doctors,"
who shall be nameless.

A shilling paid for a copy of The En-
glishman.

Six shillings and eightpence paid to a
Lawyer.

[The list can be indefinitely extended,
but our readers will probably do this for
themselves.]

Mottoes for some Weeklies.

For the World—"The World's mine
oyster."

A SHIP OF THE DESERT'S HARDSHIPS.

Allah be with you, Lord of a million readers!

May your shadow never be less! Know, 0 Sheik of St. Bride's, I
am no poet, not even the most distant relation to the Bulbul: I am
an unhappy Dromedary, torn from his home to smell sawdust, and
curse the Afreet known as the Djin of Pantomime. _ But, 0 Punch-
Bashi, I bear a hunch on my back, and, without wishing to be per-
sonal, I feel I have a claim through that protuberance upon your
special sympathies.

I could almost break out into cursing, but I feel that to indulge,
however excusably, in the habit of swearing acquired from my
fellow-prisoner, the Zebra (who chafes fearfully under a captivity
which adds to the stripes that nature has laid on his back those in-
flicted by an irate groom), might lower the Oriental dignity and
calmness of my style.

But, 0 Punch-Bashi, have I not cause for swearing? From
Arabia's burning sands, decoyed into the strong-smelling hold of a
steamer, I find myself, after the agonies of a sea-voyage and an in-
terval of subsequent confinement with a batch of sick monkeys and
a flock of swearing parrots in Jameach's anything but commodious
premises in the Commercial Road East, transferred _ to the dark
stables of a circus ! Here, after some rough discipline in the ring, I
learnt by intermittent conversation with several small elephants, who
rub on a dreary existence in the same place of captivity, that I was to
appear, in a few days, as a feature in a great Christmas attraction!
This was a flattering idea, doubtless, and anew one, for I knew of no
Christmas in the land I left, and no attraction beyond an extra graze
of thorns and thistles, and water enough to fill my five stomachs
to the brim. But I soon discovered from one of my worst-used
fellow-captives, the biggest elephant here, who was painted white
last year, in his assumed character of the Sacred Siamese, what
figuring in a Christmas Attraction in fact meant. With him, poor
fellow, it meant stopping up all his pores with whitening, treacle, and
size, a composition rendering him beautiful for a few weeks—if not for
ever—and ending in a narrow escape from congestion of the lungs.

Allah be praised, they have not this year made a Pink Drome-
dary of me, but it is bad enough to have to carry a bevy of spangle-
splashed Amazons, to breathe an asphyxiating atmosphere of gas-
fumes, exhalations of sawdust and stable manure, and to be
blinded by the lime-lights of the Giaour. My spongy feet, alas !
were never made to tread the London boards !

I used to bear my Arab master over the hot desert, speeding,
without a murmur, with a swinging stride, and outstretched neck
across the scorching Sahara, while we sniffed together the balmy
breeze which met us from the far-off oasis! And then at night,
the unloading of the caravan, the savoury repast on the sparse thorns
of the desert, the too-brief slumber as we, the ships of the desert,
lay at anchor, hobbled beneath the stars !

Now I wait at the wings for my cue, duly accentuated by a kick
in the ribs and a tug at my muzzle, in a crowd of jostling supers and
insufficiently clad ballet-girls, men in armour and caparisoned horses
—my abomination—and when I pass from the side-scenes to the
stage, if, dazzled by jets of flaring gas, and deafened by the blare
of discordant brass, I stumble or turn sulky, the street Arabs pelt
me with orange-peel from the Gallery, and my gaolers run me in
amid cheers of derision.

It is the last straw which breaks the camel's back. It is the last
spangle which will crush the Dromedary's. For know, 0 Pf/nch-
Effendi, the accursed company into which I have fallen have made
me ambitious in their own low way. I can sacrifice my desert home,
I can forget the sands of my foalhood, to gratify my last—perhaps
foolish—craving, but I shall die broken-hearted if I stay in the rank
and file of the "Grand Conference" scene—as one of the mere
" utilities," two- and four-legged—for one night more !

If I must go on in the Pantomime, let me at least figure for once
as the feature in the Transformation Scene. I feel that if I might
only go up on an iron frame surrounded by flights of Peris, I shall
not have been torn from my native deserts for nothing. We all
have our weaknesses: this is mine; and I appeal to you, 0 Caliph
of Fleet Street, by your influence with Sultan Sangee to aid my
appeal. (Signed) Hf/mpti-Duhpti,