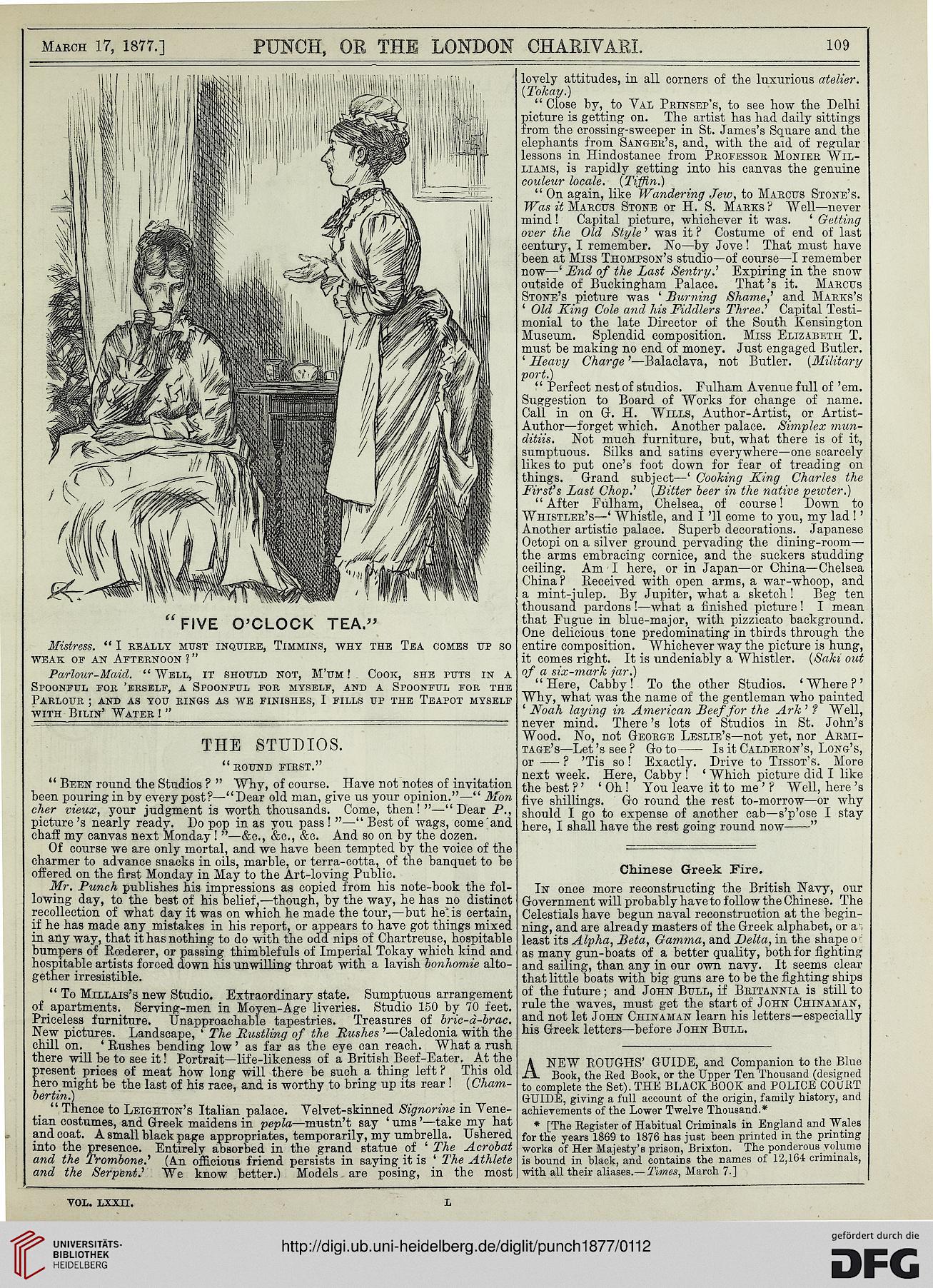 Information about OCR text
March 17, 1877.] PUNCH, OR THE LONDON CHARIVARI.

Mistress. " i really must inquire, Timmins, why the Tea comes up so

weak of an afternoon ? "

THE STUDIOS.
" round first."

Been round the Studios ? " Why, of course. Have not notes of invitation
heen pouring in by every post?—"Dear old man, give us your opinion."—" Mon
cher vieux, your judgment is worth thousands. Come, then!"—"Dear P.,
picture 's nearly ready. Do pop in as you pass ! "—" Best of wags, come'and
chaff my canvas next Monday ! "—&c, &c, &c. And so on by the dozen.

Of course we are only mortal, and we have been tempted by the voice of the
charmer to advance snacks in oils, marble, or terra-cotta, of the banquet to be
offered on the first Monday in May to the Art-loving Public.

Mr. Punch publishes his impressions as copied from his note-book the fol-
lowing day, to the best of his belief,—though, by the way, he has no distinct
recollection of what day it was on which he made the tour,—but he'is certain,
if he has made any mistakes in his report, or appears to have got things mixed
in anyway, that it has nothing to do with the odd nips of Chartreuse, hospitable
bumpers of Roederer, or passing thimblef'uls of Imperial Tokay which kind and
hospitable artists forced down his unwilling throat with a lavish bonhomie alto-
gether irresistible.

To Millais's new Studio. Extraordinary state. Sumptuous arrangement
of apartments. Serving-men in Moyen-Age liveries. Studio 150 by 70 feet.
Priceless furniture. Unapproachable tapestries. Treasures of bric-a-brac,
New pictures. Landscape, ' The Rustling of the Rushes '—Caledonia with the
chill on. 'Rushes bending low' as far as the eye can reach. What a rush
there will be to see it! Portrait—life-likeness of a British Beef-Eater. At the
present prices of meat how long will there be such a thing left P This old
hero might be the last of his race, and is worthy to bring up its rear ! [Cham-
bertin.)

"Thence to Leighton's Italian palace. Velvet-skinned Signorine in Vene-
tian costumes, and Greek maidens in pepla—mustn't say ' ums'—take my hat
and coat. A small black page appropriates, temporarily, my umbrella. Ushered
into the presence. Entirely absorbed in the grand statue of ' The Acrobat
and the Trombone.'' (An officious friend persists in saying it is ' The Athlete
and the Serpent.1 We know better.) Models are posing, in the most

lovely attitudes, in all corners of the luxurious atelier.
[Tokay.)

" Close by, to Val Prlnsep's, to see how the Delhi
picture is getting on. The artist has had daily sittings
from the crossing-sweeper in St. James's Square and the
elephants from Sanger's, and, with the aid of regular
lessons in Hindostanee from Professor Monier Wil-
liams, is rapidly getting into his canvas the genuine
couleur locale. [Tiffin.)

" On again, like Wandering Jew, to Marcus Stone's.
Was it Marcus Stone or H. S. Marks? Well—never
mind! Capital picture, whichever it was. ' Getting
over the Old Style' was it ? Costume of end of last
century, I remember. No—by Jove! That must have
been at Miss Thompson's studio—of course—I remember
now—' End of the Last Sentry.'' Expiring in the snow
outside of Buckingham Palace. That's it. Marcus
Stone's picture was ' Burning Shame' and Marks's
' Old King Cole and his Fiddlers Three.' Capital Testi-
monial to the late Director of the South Kensington
Museum. Splendid composition. Miss Elizabeth T.
must be making no end of money. Just engaged Butler.
' Heavy Charge'—Balaclava, not Butler. [Military
port.)

" Perfect nest of studios. Fulham Avenue full of 'em.
Suggestion to Board of Works for change of name.
Call in on G. H. Wills, Author-Artist, or Artist-
Author—forget which. Another palace. Simplex mun-
ditiis. Not much furniture, but, what there is of it,
sumptuous. Silks and satins everywhere—one scarcely
likes to put one's foot down for fear of treading on
things. Grand subject—' Cooking King Charles the
First's Last Chop.' [Bitter beer in the native peivter.)

"After Fulham, Chelsea, of course! Down to
Whistler's—' Whistle, and I '11 come to you, my lad !'
Another artistic palace. Superb decorations. Japanese
Octopi on a silver ground pervading the dining-room—
the arms embracing cornice, and the suckers studding
ceiling. Am I here, or in Japan—or China—Chelsea
China? Received with open arms, a war-whoop, and
a mint-julep. By Jupiter, what a sketch! Beg ten
thousand pardons !—what a finished picture! I mean
that Fugue in blue-major, with pizzicato background.
One delicious tone predominating in thirds through the
entire composition. Whichever way the picture is hung,
it comes right. It is undeniably a Whistler. [Saki out
of a six-mark jar.)

"Here, Cabby! To the other Studios. 'Where?'
Why, what was the name of the gentleman who painted
' Noah laying in American Beef for the Ark ' f Well,
never mind. There's lots of Studios in St. John's
Wood. No, not George Leslie's—not yet, nor Armi-

or — ? 'Tis so! Exactly. Drive to Tissot's. More
next week. Here, Cabby ! ' Which picture did I like
the best ? ' ' Oh ! You leave it to me ' ? Well, here's
five shillings. Go round the rest to-morrow—or why
should I go to expense of another cab—s'p'ose I stay
here, I shall have the rest going round now-"

In once more reconstructing the British Navy, our
Government will probably have to follow the Chinese. The
Celestials have begun naval reconstruction at the begin-
ning, and are already masters of the Greek alphabet, or a",
least its Alpha, Beta, Gamma, and Delta, in the shape o c
as many gun-boats of a better quality, both for fighting
and sailing, than any in our own navy. It seems clear
that little boats with big guns are to be the fighting ships
of the future; and John Bull, if Britannia is still to
rule the waves, must get the start of John Chinaman,
and not let John Chinaman learn his letters—especially
his Greek letters—before John Bull.

ANEW ROUGHS' GUIDE, and Companion to the Blue
Book, the Eed Book, or the Upper Ten Thousand (designed
to complete the Set). THE BLACK BOOK and POLICE COURT
GUIDE, giving a full account of the origin, family history, and
achievements of the Lower Twelve Thousand.*

* [The Register of Habitual Criminals in England and Wales
for the years 1869 to 1876 has just been printed in the printing
works of Her Majesty's prison, Brixton. The ponderous volume
is bound in black, and contains the names of 12,164 criminals,
with all their aliases.— Times, March 7 ]