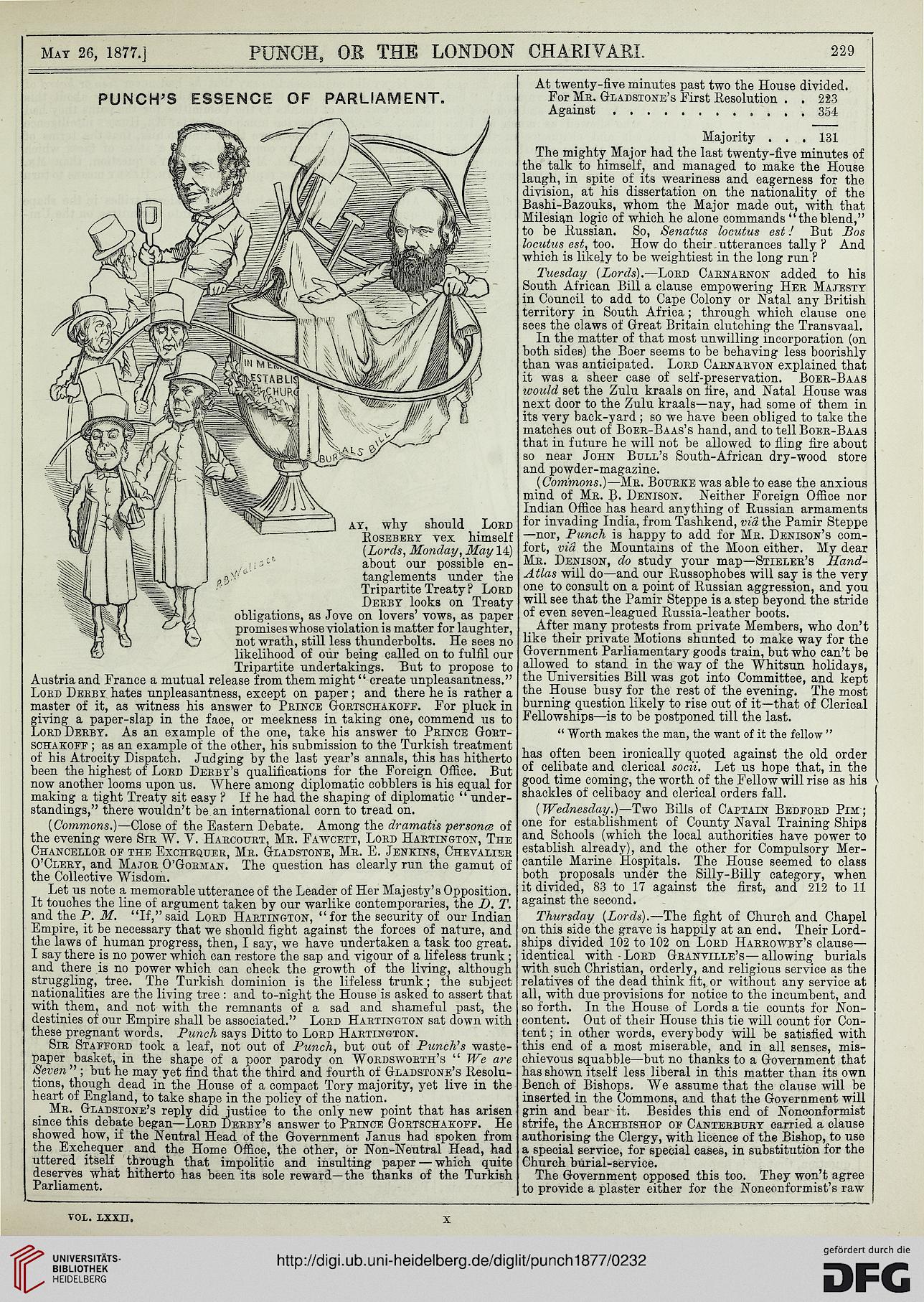 at, why should Loed
Rosebebt vex himself
[Lords, Monday, May 14)
about our possible en-
tanglements under the
Tripartite Treaty? Lord
Debbt looks on Treaty
obligations, as Jove on lovers' vows, as paper
promises whose violation is matter for laughter,
not wrath, still less thunderbolts. He sees no
likelihood of our being called on to fulfil our
Tripartite undertakings. But to propose to
Austria and France a mutual release from them might" create unpleasantness."
Loed Debbt hates unpleasantness, except on paper; and there he is rather a
master of it, as witness his answer to Pbince Goetschakoff. For pluck in
giving a paper-slap in the face, or meekness in taking one, commend us to
Loed Deebt. As an example of the one, take his answer to Peince Gobt-
schaxoff ; as an example of the other, his submission to the Turkish treatment
of his Atrocity Dispatch. Judging by the last year's annals, this has hitherto
been the highest of Loed Debby's qualifications for the Foreign Office. But
now another looms upon us. "Where among diplomatic cobblers is his equal for
making a tight Treaty sit easy ? If he had the shaping of diplomatic " under-
standings," there wouldn't be an international corn to tread on.

(C'o?n?nons.)—Close of the Eastern Debate. Among the dramatis persona of
the evening were Sib W. V. Haecouet, Me. Fawcett, Loed Haetington, The
Chancellob of the Exchequeb, Me. Gladstone, Me. E. Jenkins, Chevalteb
O'Cleet, and Majoe O'Gobji an. The question has clearly run the gamut of
the Collective Wisdom.

Let us note a memorable utterance of the Leader of Her Majesty's Opposition.
It touches the line of argument taken by our warlike contemporaries, the D. T.
and the P. M. "If," said Loed Haetington, " for the security of our Indian
Empire, it be necessary that we should fight against the forces of nature, and
the laws of human progress, then, I say, we have undertaken a task too great.
I say there is no power which can restore the sap and vigour of a lifeless trunk;
and there is no power which can check the growth of the living, although
struggling, tree. The Turkish dominion is the lifeless trunk; the subject
nationalities are the living tree : and to-night the House is asked to assert that
with them, and not with the remnants of a sad and shameful past, the
destinies of our Empire shall be associated." Loed Haetington sat down with
these pregnant words. Punch says Ditto to Loed Haetington.

Sib Staffoed took a leaf, not out of Punch, but out of Punch's waste-
paper basket, in the shape of a poor parody on Woedswobth's " We are
Seven " ; but he may yet find that the third and fourth of Gladstone's Resolu-
tions, though dead in the House of a compact Tory majority, yet live in the
heart of England, to take shape in the policy of the nation.

Mb. Gladstone's reply did justice to the only new point that has arisen
since this debate began—Loed Deebt's answer to "Pbince Gobtschakoff. He
showed how, if the Neutral Head of the Government Janus had spoken from
the Exchequer and the Home Office, the other, or Non-Neutral Head, had
uttered itself through that impolitic and insulting paper — which quite
deserves what hitherto has been its sole reward—the thanks of the Turkish
Parliament.

The mighty Major had the last twenty-five minutes of
the talk to himself, and managed to make the House
laugh, in spite of its weariness and eagerness for the
division, at his dissertation on the nationality of the
Bashi-Bazouks, whom the Major made out, with that
Milesian logic of which he alone commands "theblend,"
to be Russian. So, Senatus locutus est! But Bos
locutus est, too. How do their utterances tally ? And
which is likely to be weightiest in the long run ?

Tuesday (Lords).—Loed Caenarnon added to his
South African Bill a clause empowering Hee Majestt
in Council to add to Cape Colony or Natal any British
territory in South Africa; through which clause one
sees the claws of Great Britain clutching the Transvaal.

In the matter of that most unwilling incorporation (on
both sides) the Boer seems to be behaving less boorishly
than was anticipated. Loed Caenabvon explained that
it was a sheer case of self-preservation. Boee-Baas
icould set the Zulu kraals on fire, and Natal House was
next door to the Zulu kraals—nay, had some of them in
its very back-yard ; so we have been obliged to take the
matches out of Boee-Baas's hand, and to tell Boee-Baas
that in future he will not be allowed to fling fire about
so near John Bull's South-African dry-wood store
and powder-magazine.

{Commons.)—Mb. Botjeke was able to ease the anxious
mind of Me. B- Denison. Neither Foreign Office nor
Indian Office has heard anything of Russian armaments
for invading India, from Tashkend, via the Pamir Steppe
—nor, Punch is happy to add for Me. Denison's com-
fort, via the Mountains of the Moon either. My dear
Me. Denison, do study your map—Stlelee's Hand-
Atlas will do—and our Russophobes will say is the very
one to consult on a point of Russian aggression, and you
will see that the Pamir Steppe is a step beyond the stride
of even seven-leagued Russia-leather boots.

After many protests from private Members, who don't
like their private Motions shunted to make way for the
Government Parliamentary goods train, but who can't be
allowed to stand in the way of the Whitsun holidays,
the Universities Bill was got into Committee, and kept
the House busy for the rest of the evening. The most
burning question likely to rise out of it—that of Clerical
Fellowships—is to be postponed till the last.

" Worth makes the man, the want of it the fellow "

has often been ironically quoted against the old order
of celibate and clerical socii. Let us hope that, in the
good time coming, the worth of the Fellow will rise as his
shackles of celibacy and clerical orders fall.

(Wednesday.)—Two Bills of Captain Bedfoed Pim;
one for establishment of County Naval Training Ships
and Schools (which the local authorities have power to
establish already), and the other for Compulsory Mer-
cantile Marine Hospitals. The House seemed to class
both proposals under the Silly-Billy category, when
it divided, 83 to 17 against the first, and 212 to 11
against the second.

Thursday (Lords).—The fight of Church and Chapel
on this side the grave is happily at an end. Their Lord-
ships divided 102 to 102 on Loed Haeeowbt's clause—
identical with Loed Geanville's—allowing burials
with such Christian, orderly, and religious service as the
relatives of the dead think fit, or without any service at
all, with due provisions for notice to the incumbent, and
so forth. In the House of Lords a tie counts for Non-
content. Out of their House this tie will count for Con-
tent ; in other words, everybody will be satisfied with
this end of a most miserable, and in all senses, mis-
chievous squabble—but no thanks to a Government that
has shown itself less liberal in this matter than its own
Bench of Bishops. We assume that the clause will be
inserted in the Commons, and that the Government will
grin and bear it. Besides this end of Nonconformist
strife, the Aechbishop of Canteebijet carried a clause
authorising the Clergy, with licence of the Bishop, to use
a special service, for special cases, in substitution for the
Church burial-service.

The Government opposed this too. They won't agree
to provide a plaster either for the Nonconformist's raw