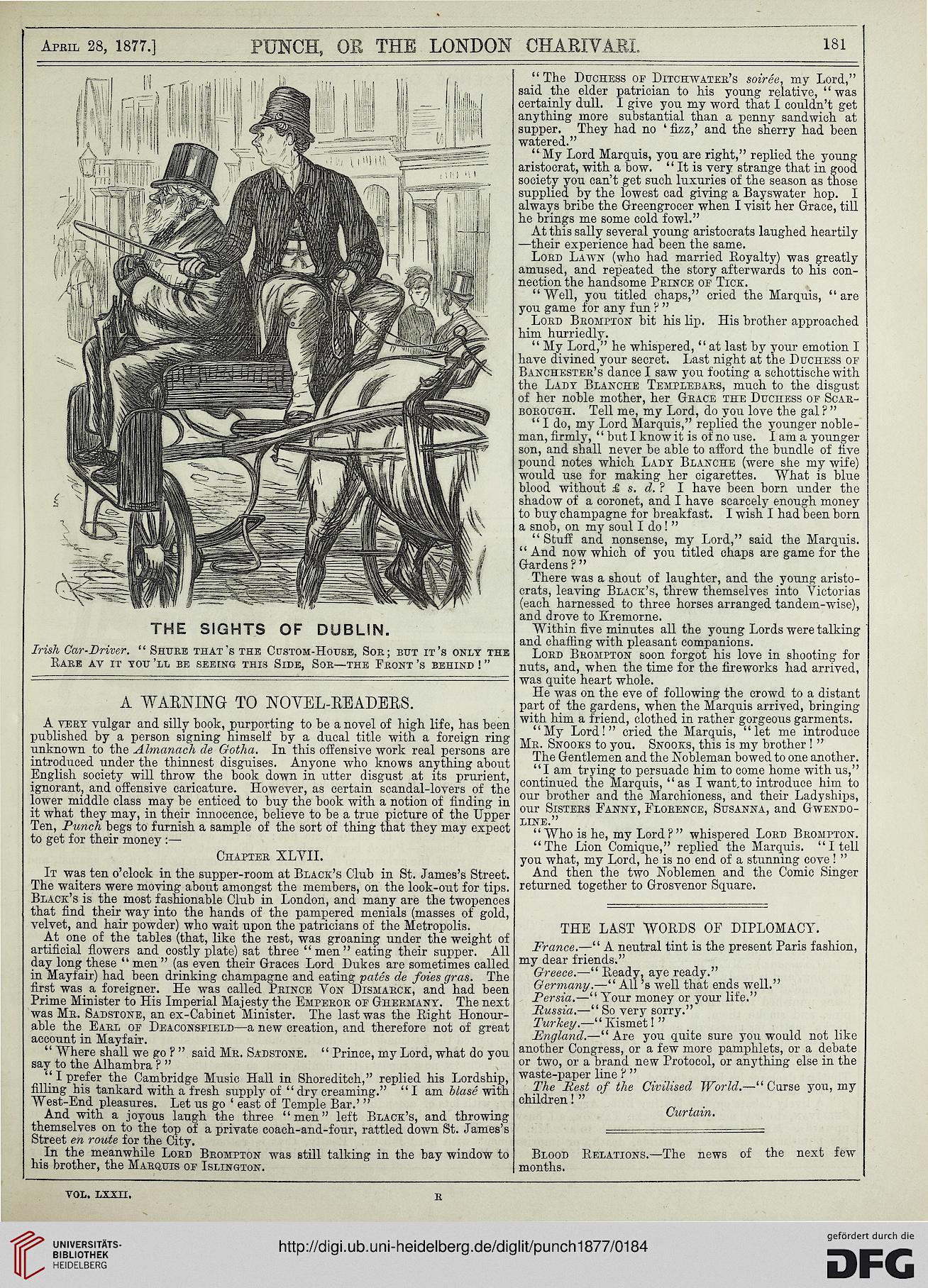 THE SIGHTS OF DUBLIN.

Irish Car-Driver. " Shore that's the Custom-House, Sor; but it's only the

eare av it you 'll be seeing this SlDE, sor—the front's behind ! "

A very vulgar and silly book, purporting to be a novel of bigb life, bas been
published by a person signing himself by a ducal title with a foreign ring
unknown to the Almanack de Gotha. In this offensive work real persons are
introduced under the thinnest disguises. Anyone who knows anything about
English society will throw the book down in utter disgust at its prurient,
ignorant, and offensive caricature. However, as certain scandal-lovers of the
lower middle class may be enticed to buy the book with a notion of finding in
it what they may, in their innocence, believe to be a true picture of the Upper
Ten, Punch begs to furnish a sample of the sort of thing that they may expect
to get for their money :—

It was ten o'clock in the supper-room at Black's Club in St. James's Street.
The waiters were moving about amongst the members, on the look-out for tips.
Black's is the most fashionable Club in London, and many are the twopences
that find their way into the hands of the pampered menials (masses of gold,
velvet, and hair powder) who wait upon the patricians of the Metropolis.

At one of the tables (that, like the rest, was groaning under the weight of
artificial flowers and costly plate) sat three "men" eating their supper. All
day long these " men " (as even their Graces Lord Dukes are sometimes called
in Mayfair) had_ been drinking champagne and eating pates de foies gras. The
first was a foreigner. He was called Prince Yon Dismarck, and had been
Prime Minister to His Imperial Maj esty the Emperor oe Gherhany. The next
was Mr. Sadstone, an ex-Cabinet Minister. The last was the Bight Honour-
able the Earl of Deaconsfield—a new creation, and therefore not of great
account in Mayfair.

" I prefer the Cambridge Music Hall in Shoreditch," replied his Lordship,
filling his tankard with a fresh supply of " dry creaming." "I am blase with
West-End pleasures. Let us go ' east of Temple Bar.' "

And with a joyous laugh the three "men" left Black's, and throwing
themselves on to the top of a private coach-and-four, rattled down St. James's
Street en route for the City.

In the meanwhile Lord Brompton was still talking in the bay window to
his brother, the Marquis of Islington.

" The Duchess of Ditchwater's soiree, my Lord,"
said the elder patrician to his young relative, " was
certainly dull. I give you my word that I couldn't get
anything more substantial than a penny sandwich at
supper. They had no ' fizz,' and the sherry had been
watered."

"My Lord Marquis, you are right," replied the young
aristocrat, with a bow. " It is very strange that in good
society you can't get such luxuries of the season as those
supplied by the lowest cad giving a Bayswater hop. I
always bribe the Greengrocer when I visit her Grace, till
he brings me some cold fowl."

At this sally several young aristocrats laughed heartily
—their experience had been the same.

Lord Lawn (who had married Boyalty) was greatly
amused, and repeated the story afterwards to his con-
nection the handsome Prince of Tick.

Lord Brompton bit his lip. His brother approached
him hurriedly.

" My Lord," he whispered, " at last by your emotion I
have divined your secret. Last night at the Duchess of
Banchester's dance I saw you footing a schottische with
the Lady Blanche Templebars, much to the disgust
of her noble mother, her Grace the Duchess of Scar-
borough. Tell me, my Lord, do you love the gal ? "

" I do, my Lord Marquis," replied the younger noble-
man, firmly, '' but I know it is of no use. I am a younger
son, and shall never be able to afford the bundle of five
pound notes which Lady Blanche (were she my wife)
would use for making her cigarettes. What is blue
blood without £ s. d.? I have been born under the
shadow of a coronet, and I have scarcely enough money
to buy champagne for breakfast. I wish I had been born
a snob, on my soul I do! "

" Stuff and nonsense, my Lord," said the Marquis.
" And now which of you titled chaps are game for the
Gardens ? "

There was a shout of laughter, and the young aristo-
crats, leaving Black's, threw themselves into Victorias
(each harnessed to three horses arranged tandem-wise),
and drove to Kremorne.

Within five minutes all the young Lords were talking
and chaffing with pleasant companions.

Lord Brompton soon forgot his love in shooting for
nuts, and, when the time for the fireworks had arrived,
was quite heart whole.

He was on the eve of following the crowd to a distant
part of the gardens, when the Marquis arrived, bringing
with him a friend, clothed in rather gorgeous garments.

"My Lord!" cried the Marquis, "let me introduce
Mr. Snooks to you. Snooks, this is my brother! "

The Gentlemen and the Nobleman bowed to one another.

"I am trying to persuade him to come home with us,"
continued the Marquis, "as I want,to introduce him to
our brother and the Marchioness, and their Ladyships,
our Sisters Fanny, Florence, Susanna, and Gwendo-
line."

" Who is he, my Lord P " whispered Lord Bromtton.

"The Lion Comique," replied the Marquis. " I tell
you what, my Lord, he is no end of a stunning cove ! "

And then the two Noblemen and the Comic Singer
returned together to Grosvenor Square.

THE LA3T WORDS OF DIPLOMACY.

France.—" A neutral tint is the present Paris fashion,
my dear friends."

England.—"Are you quite sure you would not like
another Congress, or a few more pamphlets, or a debate
or two, or a brand new Protocol, or anything else in the
waste-paper line ? "

The Rest of the Civilised World.—" Curse you, my
children! "

Blood Relations.—The news of the next few
months.