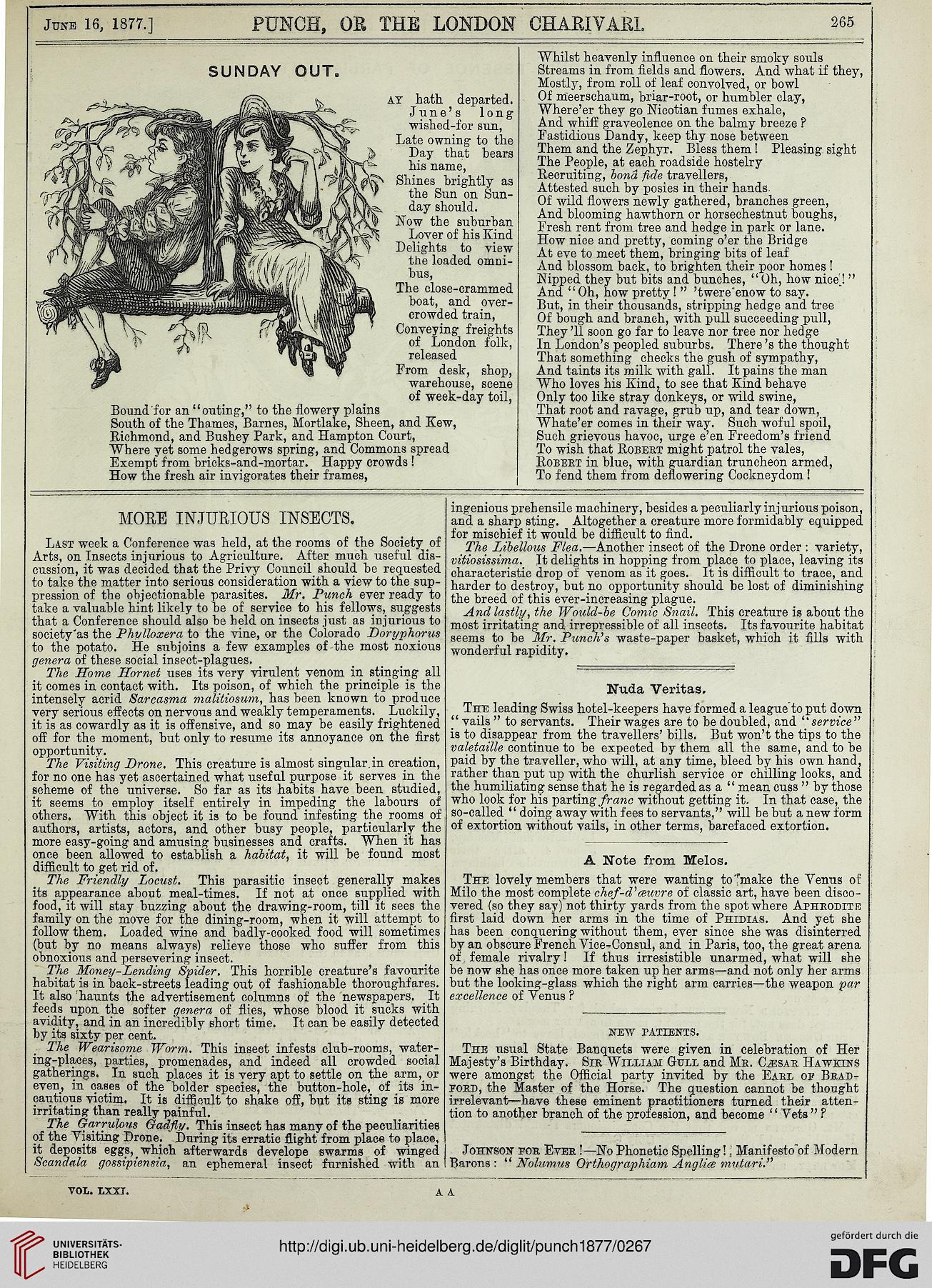 Late owning to the
Day that hears
his name,

Shines hrightly as
the Sun on Sun-
day should.

Now the suhurhan
Lover of his Kind

Bound'for an "outing," to the flowery plains
South of the Thames, Barnes, Mortlake, Sheen, and Kew,
Richmond, and Bushey Park, and Hampton Court,
Where yet some hedgerows spring, and Commons spread
Exempt from bricks-and-mortar. Happy crowds !
How the fresh air invigorates their frames,

"Whilst heavenly influence on their smoky souls

Streams in from fields and flowers. And what if they,

Mostly, from roll of leaf convolved, or bowl

Of meerschaum, briar-root, or humbler clay,

And whiff graveolence on the balmy breeze ?

Fastidious Dandy, keep thy nose between

Them and the Zephyr. Bless them! Pleasing sight

The People, at each roadside hostelry

Attested such by posies in their hands

And blooming hawthorn or horsechestnut boughs,

Fresh rent from tree and hedge in park or lane.

How nice and pretty, coming o'er the Bridge

At eve to meet them, bringing bits of leaf

And blossom back, to brighten their poor homes !

Nipped they but bits and bunches, "Oh, how nice^! "

But, in their thousands, stripping hedge and tree

Of bough and branch, with pull succeeding pull,

They '11 soon go far to leave nor tree nor hedge

That something checks the gush of sympathy,

And taints its milk with gall. It pains the man

Who loves his Kind, to see that Kind behave

That root and ravage, grub up, and tear down,

Whate'er comes in their way. Such woful spoil,

To fend them from deflowering Cockneydom !

Last week a Conference was held, at the rooms of the Society of
Arts, on Insects injurious to Agriculture. After much useful dis-
cussion, it was decided that the Privy Council should be requested
to take the matter into serious consideration with a view to the sup-
pression of the objectionable parasites. Mr. Punch ever ready to
take a valuable hint likely to be of service to his fellows, suggests
that a Conference should also be held on insects just as injurious to
society'as the Phylloxera to the vine, or the Colorado Doryphorus
to the potato. He subjoins a few examples of the most noxious
genera of these social insect-plagues.

The Home Hornet uses its very virulent venom in stinging all
it comes in contact with. Its poison, of which the principle is the
intensely acrid Sarcasma malitiosum, has been known to produce
very serious effects on nervous and weakly temperaments. Luckily,
it is as cowardly as it is offensive, and so may be easily frightened
off for the moment, but only to resume its annoyance on the first
opportunity.

The Visiting Drone. This creature is almost singular, in creation,
for no one has yet ascertained what useful purpose it serves in the
scheme of the universe. So far as its habits have been studied,
it seems to employ itself entirely in impeding the labours of
others. With this object it is to be found infesting the rooms of
authors, artists, actors, and other busy people, particularly the
more easy-going and amusing businesses and crafts. When it has
once been allowed to establish a habitat, it will be found most
difficult to get rid of.

The Friendly Locust. This parasitic insect generally makes
its appearance about meal-times. If not at once supplied with
food, it will stay buzzing about the drawing-room, till it sees the
family on the move for the dining-room, when it will attempt to
follow them. Loaded wine and badly-cooked food will sometimes
(but by no means always) relieve those who suffer from this
obnoxious and persevering insect.

The Money-Lending Spider. This horrible creature's favourite
habitat is in back-streets leading out of fashionable thoroughfares.
It also haunts the advertisement columns of the newspapers. _ It
feeds upon the softer genera of flies, whose blood it sucks with
avidity, and in an incredibly short time. It can be easily detected
by its sixty per cent.

The Wearisome Worm. This insect infests club-rooms, water-
ing-places, parties, promenades, and indeed all crowded social
gatherings. In such places it is very apt to settle on the arm, or
even, in cases of the bolder species, the button-hole, of its in-
cautious victim. It is difficult to shake off, but its sting is more
irritating than really painful.

The Garrulous Gadfly. This insect has many of the peculiarities
of the Visiting Drone; During its erratic flight from place to place,
it deposits eggs, which afterwards develope swarms of winged
Scandala gossipiensia, an ephemeral insect furnished with an

ingenious prehensile machinery, besides a peculiarly injurious poison,
and a sharp sting. Altogether a creature more formidably equipped
for mischief it would be difficult to find.

The Libellous Flea.—Another insect of the Drone order : variety,
vitiosissima. It delights in hopping from place to place, leaving its
characteristic drop of venom as it goes. It is difficult to trace, and
harder to destroy, but no opportunity should be lost of diminishing
the breed of this ever-increasing plague.

And lastly, the Would-be Comic Snail. This creature is about the
most irritating and irrepressible of all insects. Its favourite habitat
seems to be Mr. Punch's waste-paper basket, which it fills with
wonderful rapidity.

The leading Swiss hotel-keepers have formed a league to put down
" vails " to servants. Their wages are to be doubled, and ''service"
is to disappear from the travellers' bills. But won't the tips to the
valetaille continue to be expected by them all the same, and to be
paid by the traveller, who will, at any time, bleed by his own hand,
rather than put up with the churlish service or chilling looks, and
the humiliating sense that he is regarded as a " mean cuss " by those
who look for his parting franc without getting it. In that case, the
so-called " doing away with fees to servants," will be but a new form
of extortion without vails, in other terms, barefaced extortion.

A Note from Melos.

The lovely members that were wanting to "make the Venus of
Milo the most complete chef-d'ceuvre of classic art, have been disco-
vered (so they say) not thirty yards from the spot where Aphrodite
first laid down her arms in the time of Phidias. And yet she
has been conquering without them, ever since she was disinterred
by an obscure French Vice-Consul, and in Paris, too, the great arena
of female rivalry! If thus irresistible unarmed, what will she
be now she has once more taken up her arms—and not only her arms
but the looking-glass which the right arm carries—the weapon par
excellence of Venus P

The usual State Banquets were given in celebration of Her
Majesty's Birthday. Sir Wilxiah Gtjxl and Mr. Cesar Hawetns
were amongst the Official party invited by the Earl op Brad-
ford, the Master of the Horse. The question cannot be thought
irrelevant—have these eminent practitioners turned their atten-
tion to another branch of the profession, and become '' Vets " ?