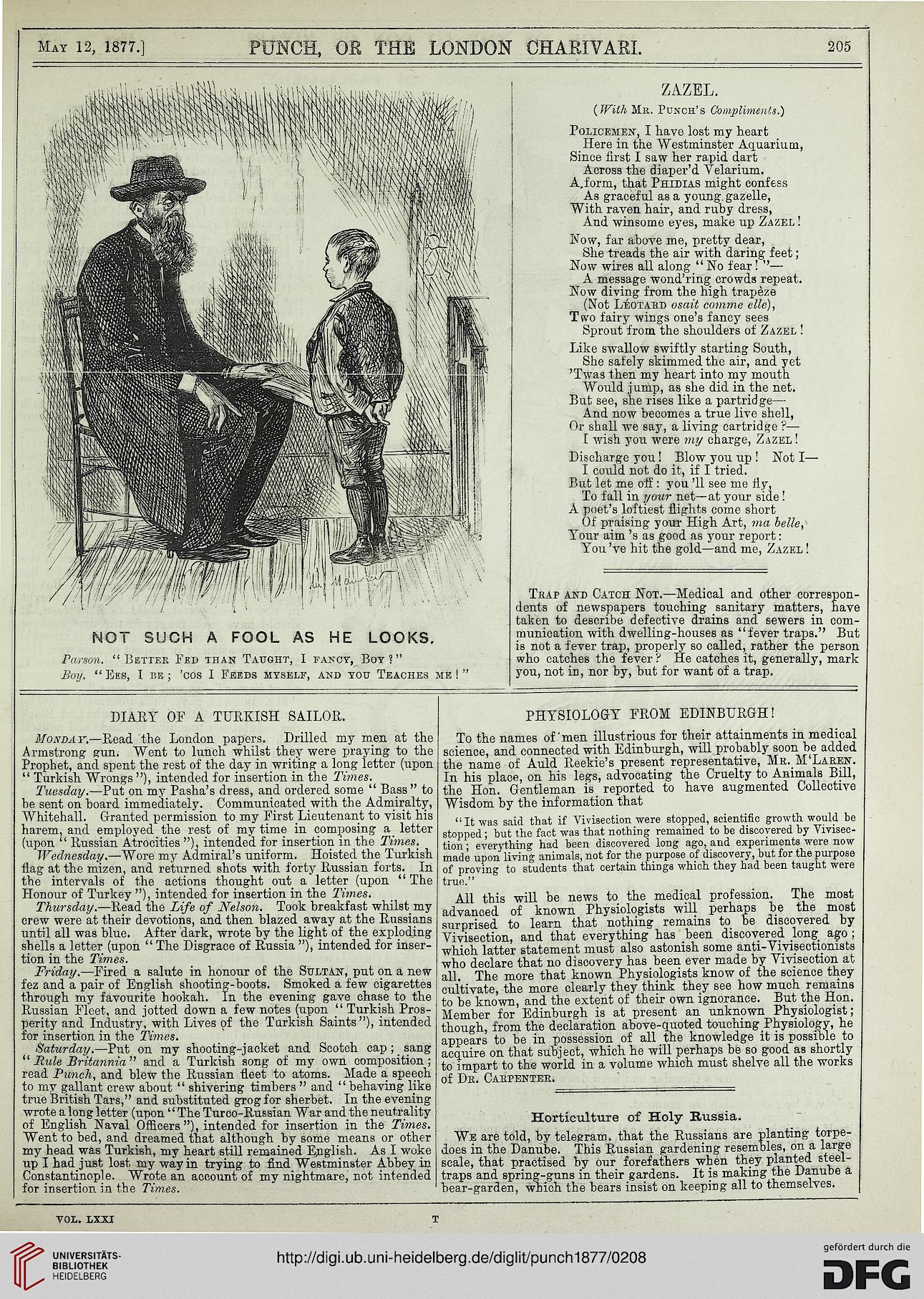 NOT SUCH A FOOL AS HE LOOKS,

Policemen, I have lost my heart

Here in the Westminster Aquarium,
Since first I saw her rapid dart

Across the diaper'd Velarium.
A. form, that Phidias might confess

As graceful as a young gazelle,
With raven hair, and ruby dress,

And winsome eyes, make up Zazel !

Now, far above me, pretty dear,

She treads the air with daring feet;
Now wires all along "No fear! "—

Sprout from the shoulders of Zazel !

She safely skimmed the air, and yet
'Twas then my heart into my mouth

Would jump, as she did in the net.
But see, she rises like a partridge—

And now becomes a true live shell,
Or shall we say, a living cartridge ?—

I wish you were my charge, Zazel !

Discharge you! Blow you up ! Not I—

To fall in your net—at your side !
A poet's loftiest flights come short
_ Of praising your High Art, ma belle,
Your aim's as good as your report:

Trap and Catch Not.—Medical and other correspon-
dents of newspapers touching sanitary matters, have
taken to describe defective drains and sewers in com-
munication with dwelling-houses as "fever traps." But
is not a fever trap, properly so called, rather the person
who catches the fever r He catches it, generally, mark
you, not in, nor by, but for want of a trap.

DIARY OF A TURKISH SAILOR.

Monday— Read the London papers. Drilled my men at the
Armstrong gun. Went to lunch whilst they were praying to the
Prophet, and spent the rest of the day in writing a long letter (upon
" Turkish Wrongs "), intended for insertion in the Times.

Tuesday.—Put on my Pasha's dress, and ordered some " Bass" to
be sent on board immediately. Communicated with the Admiralty,
Whitehall. Granted permission to my First Lieutenant to visit his
harem, and employed the rest of my time in composing a letter
(upon " Russian Atrocities "), intended for insertion in the Times.

Wednesday.—Wore my Admiral's uniform. Hoisted the Turkish
flag at the mizen, and returned shots with forty Russian forts. In
the intervals of the actions thought out a letter (upon "The
Honour of Turkey "), intended for insertion in the Times.

Thursday.—Read the Life of Nelson. Took breakfast whilst my
crew were at their devotions, and then blazed away at the Russians
until all was blue. After dark, wrote by the light of the exploding
shells a letter (upon " The Disgrace of Russia "), intended for inser-
tion in the Times.

Friday.—Fired a salute in honour of the Sultan, put on a new
fez and a pair of English shooting-boots. Smoked a few cigarettes
through my favourite hookah. In the evening gave chase to the
Russian Fleet, and jotted down a few notes (upon " Turkish Pros-
perity and Industry, with Lives of the Turkish Saints"), intended
for insertion in the Times.

Saturday.—Put on my shooting-jacket and Scotch cap ; sang
" Rule Britannia " and a Turkish song of my own composition ;
read Punch, and blew the Russian fleet to atoms. Made a speech
to my gallant crew about " shivering timbers " and "behaving like
true British Tars," and substituted grog for sherbet. In the evening
wrote a long letter (upon "The Turco-Russian War and the neutrality
of English Naval Officers"), intended for insertion in the Times.
Went to bed, and dreamed that although by some means or other
my head was Turkish, my heart still remained English. As I woke
up I had just lost my way in trying to find Westminster Abbey in
Constantinople. Wrote an account of my nightmare, not intended
for insertion in the Times.

To the names of'men illustrious for their attainments in medical
science, and connected with Edinburgh, will probably soon be added
the name of Auld Reekie's present representative, Mr. M'Laren.
In his place, on his legs, advocating the Cruelty to Animals Bill,
the Hon. Gentleman is_ reported to have augmented Collective
Wisdom by the information that

"It was said that if Vivisection were stopped, scientific growth would be
stopped; but the fact was that nothing remained to be discovered by Vivisec-
tion ; everything had been discovered long ago, and experiments were now
made upon living animals, not for the purpose of discovery, but for the purpose
of proving to students that certain things which they had been taught were
true."

All this will be news to the medical profession. The most
advanced of known Physiologists will perhaps be the most
surprised to learn that nothing remains to be discovered by
Vivisection, and that everything has been discovered long ago ;
which latter statement must also astonish some anti-Viyisectionists
who declare that no discovery has been ever made by Vivisection at
all. The more that known Physiologists know of the science they
cultivate, the more clearly they think they see how much remains
to be known, and the extent of their own ignorance. But the Hon.
Member for Edinburgh is at present an unknown Physiologist;
though, from the declaration above-quoted touching Physiology, he
appears to be in possession of all the knowledge it is possible to
acquire on that subject, which he will perhaps be so good as shortly
to impart to the world in a volume which must shelve all the works
of Dr. Carpenter.

We are told, by telegram, that the Russians are planting torpe-
does in the Danube. This Russian gardening resembles, on a large
scale, that practised by our forefathers when they planted ^eel-
traps and spring-guns in their gardens. It is making the Danube a
bear-garden, which the bears insist on keeping all to themselves.