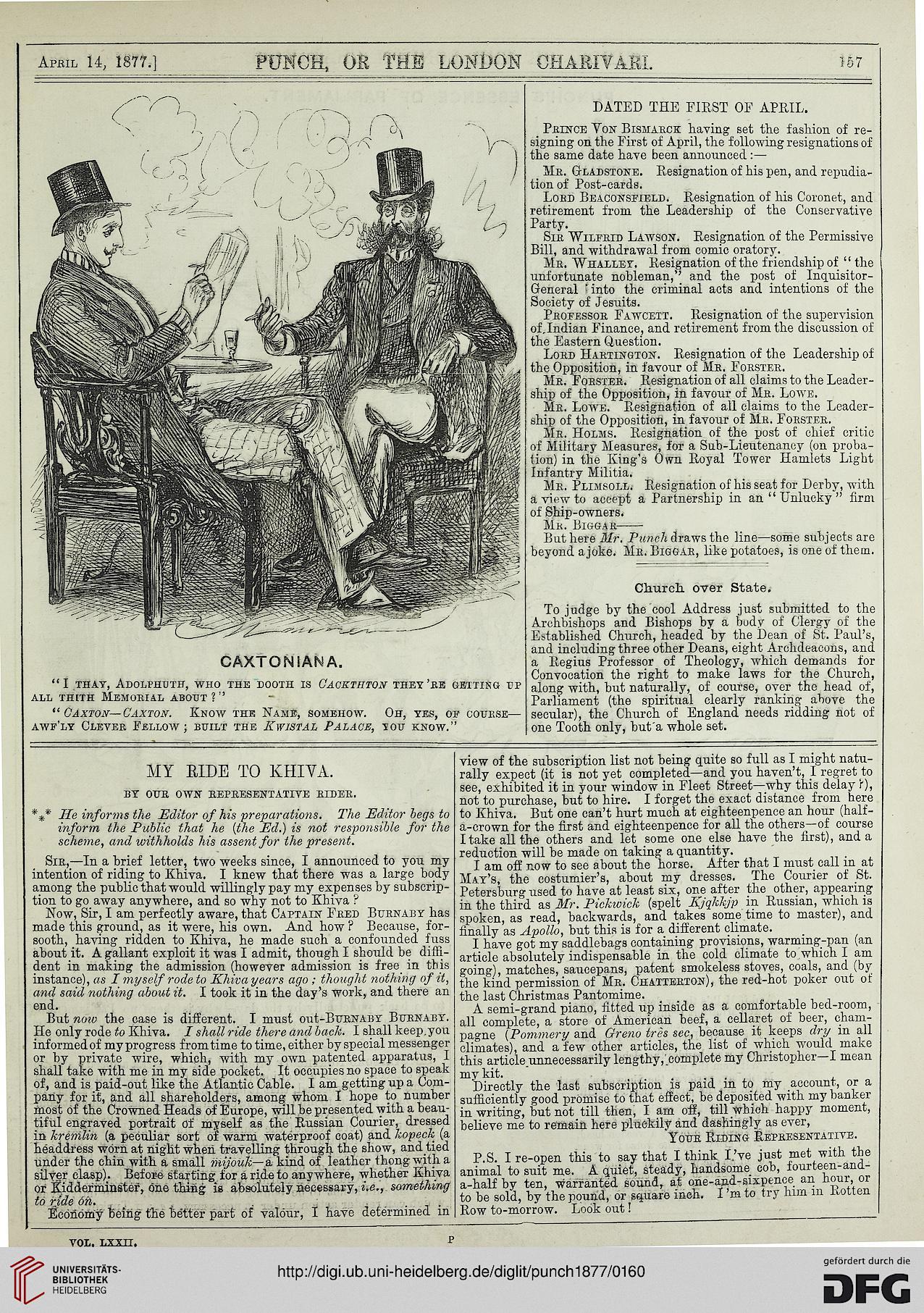 Information about OCR text
April u, 1877.] PUNCH, OR THE LONDON CHARIVARI. nr

" i that, adolphuth, who the booth is GAGKTHTON they 're getting up

DATED THE FIRST OF APRIL.

_ Prince Von Bismarck having set the fashion of re-
signing on the First of April, the following resignations of
the same date have been announced :—

. Mr. Gladstone. Resignation of his pen, and repudia-
tion of Post-cards.

Lobd Beaconsfield. Resignation of his Coronet, and
retirement from the Leadership of the Conservative
Party.

Sir "Wilfrid Lawson. Resignation of the Permissive
Bill, and withdrawal from comic oratory.

Mr. Whalley. Resignation of the friendship of " the
unfortunate nobleman,'' and the post of Inquisitor
General : into the criminal acts and intentions of the
Society of Jesuits.

Professor Fawcett. Resignation of the supervision
of,Indian Finance, and retirement from the discussion of
the Eastern Question.

Lord Hartington. Resignation of the Leadership of
the Opposition, in favour of Mr. Forster.

Mr. Forster. Resignation of all claims to the Leader
ship of the Opposition, in favour of Mr. Lowe.

Mr. Lowe. Resignation of all claims to the Leader
ship of the Opposition, in favour of Mr. Forster.

Mr. Holms. Resignation of the post of chief critic
of Military Measures, for a Sub-Lieutenancy (on proba
tion) in the King's Own Royal Tower Hamlets Light
Infantry Militia.

Mr. Plimsoll. Resignation of his seat for Derby, with
a view to accept a Partnership in an "Unlucky" firm
of Ship-owners.

But here Mr. Punch draws the line—some subjects are
beyond ajoke. Mr. Biggar, like potatoes, is one of them

To judge by the cool Address just submitted to the
Archbishops and Bishops by a body of Clergy of the
Established Church, headed by the Dean of St. Paul's,
and including three other Deans, eight Archdeacons, and
a Regius Professor of Theology, which demands for
Convocation the right to make laws for the Church,
along with, but naturally, of course, over the head of,
Parliament (the spiritual clearly ranking above the
secular), the Church of England needs ridding not of
one Tooth only, but'a whole set.

MY BIDE TO KHIVA.

by our own REPRESENTATIVE RIDER.

*** He informs the Editor of his preparations. The Editor begs to
inform the Public that he {the Ed.) is not responsible for the
scheme, and withholds his assent for the present.

Sir,;—In a brief letter, two weeks since, I announced to you my
intention of riding to Khiva. I knew that there was a large body
among the public that would willingly pay my expenses by subscrip-
tion to go away anywhere, and so why not to Khiva ?

Now, Sir, I am perfectly aware, that Captain Fred Burnaby has
made this ground, as it were, his own. And how ? Because, for-
sooth, having ridden to Khiva, he made such a confounded fuss
about it. A gallant exploit it was I admit, though I should be dim-
dent in making the admission (however admission is free in this
instance), as I myself rode to Khiva years ago ; thought nothing of it,
and said nothing about it. I took it in the day's work, and there an
end.

But now the case is different. I must out-BuRNABY Burnaby.
He only rode to Khiva. I shall ride there and back. I shall keep.you
informed of my progress from time to time, either by special messenger
or by private wire, which, with my own patented apparatus, I
shall take with me in my side pocket. It occupies no space to speak
of, and is paid-out like the Atlantic Cable. I am getting up a Com-
pany for it, and all shareholders, among whom I hope to number
most of the Crowned Heads of Europe, will be presented with a beau-
tiful engraved portrait of myself as the Russian Courier, dressed
in krenilin (a peculiar sort of warm waterproof coat) and kopeck (a
headdress worn at night when travelling through the show, and tied
under the chin with a small tnijouk—a, kind of leather thong with a
silver clasp). Before starting for a ride to anywhere, whether Khiva
or Kidderminster, one thing is absolutely necessary, i.e., something
to ride oh.

Economy being the better part of valour, I have determined in

view of the subscription list not being quite so full as I might natu-
rally expect (it is not yet completed.—and you haven't, I regret to
see, exhibited it in your window in Fleet Street—why this delay r),
not to purchase, but to hire. I forget the exact distance from here
to Khiva. But one can't hurt much at eighteenpence an hour (half-
a-crown for the first and eighteenpence for all the others—of course
I take all the others and let some one else have the first), and a
reduction will be made on taking a quantity.

I am off now to see about the horse. After that I must call in at
May's, the costumier's, about my dresses. The Courier of St.
Petersburg used to have at least six, one after the other, appearing
in the third as Mr. Pickwick (spelt Kjqkkjp in Russian, which is
spoken, as read, backwards, and takes some time to master), and
finally as Apollo, but this is for a different climate.

I have got my saddlebags containing provisions, warming-pan (an
article absolutely indispensable in the cold climate to which I am
going), matches, saucepans, patent smokeless stoves, coals, and (by
the kind permission of Mb,. Chatterton), the red-hot poker out of
the last Christmas Pantomime.

A semi-grand piano, fitted up inside as a comfortable bed-room,
all complete, a store of American beef, a cellaret of beer, cham-
pagne {Pommery and Greno tres sec, because it keeps dry in all
climates), and a few other articles, the list of which would make
this article unnecessarily lengthy, complete my Christopher—I mean
my kit.

Directly the last subscription is paid in to my account, or a
sufficiently good promise to that effect, be deposited with my banker
in writing, but not till then, I am off, till which happy moment,
believe me to remain here pluekily and dashingly as ever,

P.S. I re-open this to say that I think I.'ve just met with the
animal to suit me. A quiet, steady, handsome cob, fourteen-and-
a-half by ten, warranted sound, at one-and-sixpence an hour, or
to be sold, by the pound, or square inch. I'm to try him m Rotten
Row to-morrow. Look out!