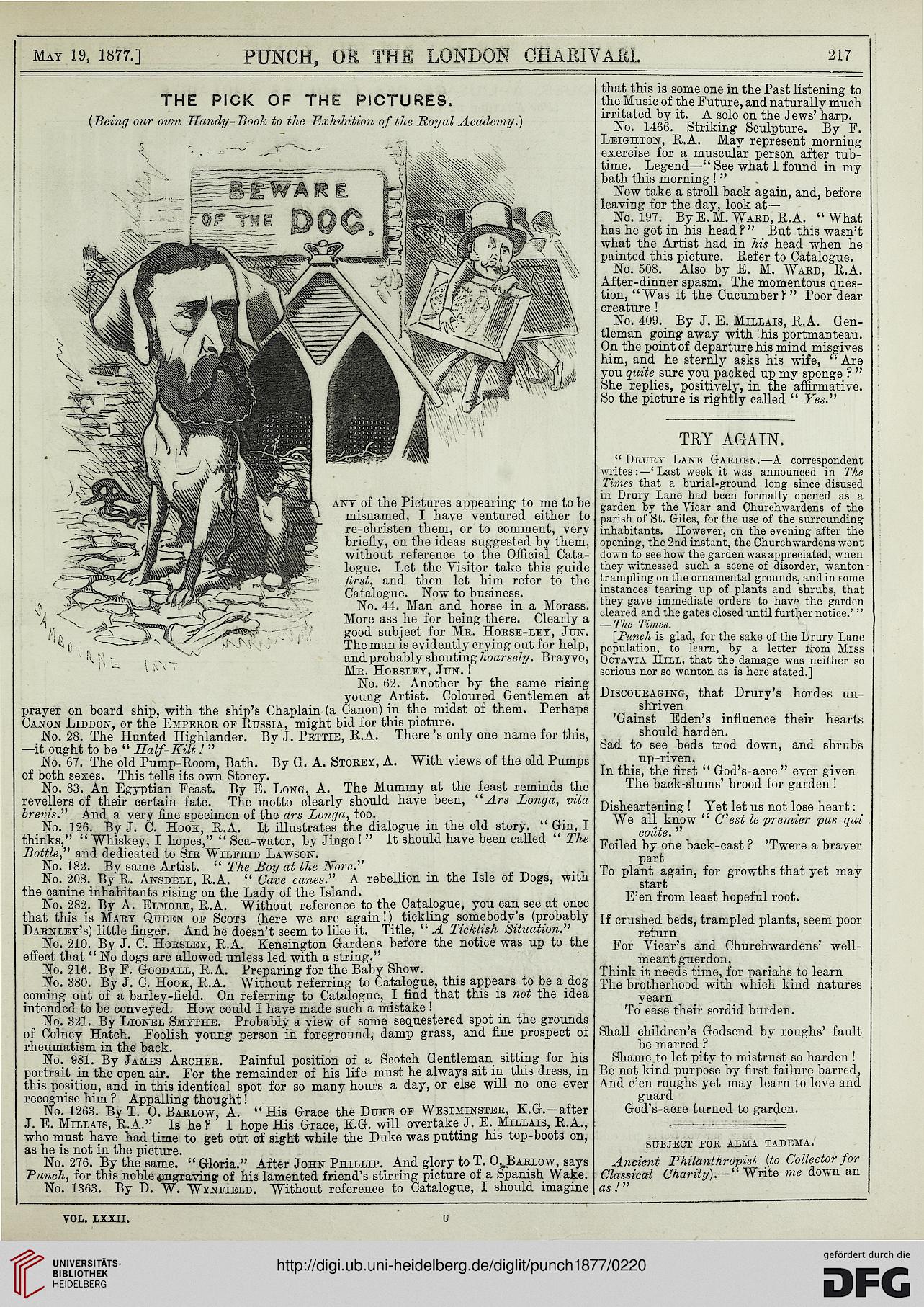 PUNCH, OR THE LONDON OHAMVAKL

THE PICK OF THE PICTURES.

(Being our oivn Sandy-Booh to the Exhibition of the Royal Academy.)

ant of the Pictures appearing to me to be
misnamed, I have ventured either to
re-christen them, or to comment, very
briefly, on the ideas suggested by them,
without reference to the Official Cata-
logue. Let the Visitor take this guide
first, and then let him refer to the
Catalogue. Now to business.

No. 44. Man and horse in a Morass.
More ass he for being there. Clearly a
good subject for Mr. Hoese-let, Jun.
The man is evidently crying out for help,
and probably shouting hoarsely. Brayvo,
Me. Horsley, Just. !

No. 62. Another by the same rising
young Artist. Coloured Gentlemen at
prayer on board ship, with the ship's Chaplain (a Canon) in the midst of them. Perhaps
Canon- Liddon, or the Emperor of Russia, might bid for this picture.

No. 83. An Egyptian Feast. By E. Long, A. The Mummy at the feast reminds the
revellers of their certain fate. The motto clearly should have been, " Ars Longa, vita
brevis." And a very fine specimen of the ars Longa, too.

No. 208. By P. Ansdell, R.A. " Cave canes." A rebellion in the Isle of Dogs, with
the canine inhabitants rising on the Lady of the Island.

No. 282. By A. Elmoee, R.A. Without reference to the Catalogue, you can see at once
that this is Mart Queen of Scots (here we are again!) tickling somebody's (probably
Darnley's) little finger. And he doesn't seem to like it. Title, " A Ticklish Situation."

No. 210. By J. C. Hoesley, R.A. Kensington Gardens before the notice was up to the
effect that " No dogs are allowed unless led with a string."

No. 321. By Lionel Smythe. Probablv a view of some sequestered spot in the grounds
of Colney Hatch. Foolish young person 'in foreground, damp grass, and fine prospect of
rheumatism in the back.

No. 981. By James Aecheb. Painful position of a Scotch Gentleman sitting for his
portrait in the open air. For the remainder of his life must he always sit in this dress, in
this position, and in this identical spot for so many hours a day, or else will no one ever
recognise him ? Appalling thought!

No. 276. By the same. " Gloria." After John Phillip. And glory to T. O^Baelow, says
Punch, for this noble engraving of his lamented friend's stirring picture of a Spanish Wake.

No. 1363. By D. W. Wynfield. Without reference to Catalogue, I should imagine

that this is some one in the Past listening to
the Music of the Future, and naturally much
irritated by it. A solo on the Jews' harp.

No. 1466. Striking Sculpture. By F.
Leighton, R.A. May represent morning
exercise for a muscular person after tub-
time. Legend—" See what I found in my
bath this morning ! "

Now take a stroll back again, and, before
leaving for the day, look at—

No. 197. ByE.M.WAED, R.A. "What
has he got in his head?" But this wasn't
what the Artist had in his head when he
painted this picture. Refer to Catalogue.

No. 409._ By J. E. Millais, R.A. Gen-
tleman going away with 'his portmanteau.
On the point of departure his mind misgives
him, and he sternly asks his wife, "Are
you quite sure you packed up my sponge P "
She replies, positively, in the affirmative.
So the picture is rightly called " Yes."

" Drury Lane Garden.—A correspondent
writes:—'Last week it was announced in The
Times that a burial-ground loDg since disused
in Drury Lane had been formally opened as a
garden by the Vicar and Churchwardens of the
parish of St. Giles, for the use of the surrounding
inhabitants. However, on the evening after the
opening, the 2nd instant, the Churchwardens went
down to see how the garden was appreciated, when
they witnessed such a scene of disorder, wanton -
trampling on the ornamental grounds, and in wme
instances tearing up of plants and shrubs, that
they gave immediate orders to hav" the garden
cleared and the gates closed until further notice.' "
—The Times.

[Punch is glad, for the sake of the Lrury Lane
population, to learn, by a letter from Miss
Octavia Hill, that the damage was neither so
serious nor so wanton as is here stated.]

'Gainst Eden's influence their hearts
should harden.
Sad to see beds trod down, and shrubs
up-riven,

In this, the first " God's-acre " ever given
The back-slums' brood for garden !

Disheartening ! Yet let us not lose heart:
We all know " Cest le premier pas qui
cofite. "

Foiled by one back-cast ? 'Twere a braver
part

To plant again, for growths that yet may
start

For Vicar's and Churchwardens' well-
meant guerdon.
Think it needs time, for pariahs to learn
The brotherhood with which kind natures
yearn

To ease their sordid burden.

Shall children's Godsend by roughs' fault
be marred ?
Shame to let pity to mistrust so harden!
Be not kind purpose by first failure barred,
And e'en roughs yet may learn to love and
guard

subject for alma tadema.
Ancient Philanthropist (to Collector for
Classical Charity).— ' Write me down an