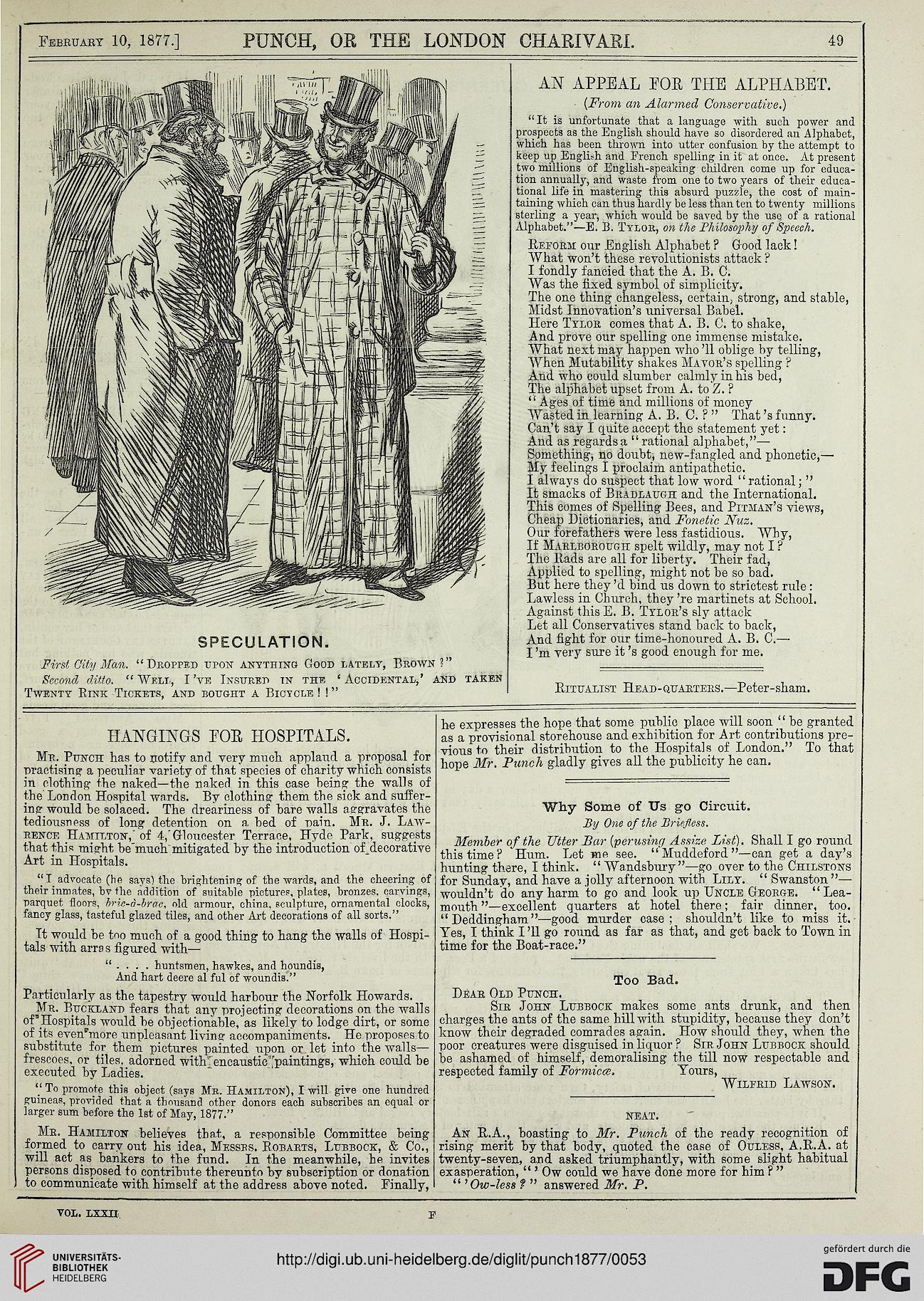 AN APPEAL FOR THE ALPHABET.

{From an Alarmed Conservative.)

"It is unfortunate that a language with such power and
prospects as the English should have so disordered an Alphabet,
which has been thrown into utter confusion by the attempt to
keep up English and French spelling in it at once. At present
two millions of English-speaking children come up for educa-
tion annually, and waste from one to two years of their educa-
tional life in mastering this absurd puzzle, the cost of main-
taining which can thus hardly be less than ten to twenty millions
sterling a year, which would be saved by the use of a rational
Alphabet."—E. B. Tylor, on the Philosophy of Speech.

What won't these revolutionists attack ?

I fondly fancied that the A. B. C.

Was the fixed symbol of simplicity.

The one thing changeless, certain, strong, and stable,

Here Tylor comes that A. B. C. to shake,

And prove our spelling one immense mistake.

What next may happen who '11 oblige by telling,

And who could slumber calmly in his bed,

The alphabet upset from A. to Z. ?

'' Ages of time and millions of money

Can't say I quite accept the statement yet:

And as regards a " rational alphabet,"—

Something, no doubt, new-fangled and phonetic,—

My feelings I proclaim antipathetic.

I always do suspect that low word "rational; "

It smacks of Bradlaugh and the International.

This comes of Spelling Bees, and Pitman's views,

Our forefathers were less fastidious. Wby,

If Marlborough spelt wildly, may not I ?

The llada are all for liberty. Their fad,

But here they'd bind us down to strictest rule :

Lawless in Church, they 're martinets at School.

Against this E. B. Tylor's sly attack

Let all Conservatives stand back to back,

And fight for our time-honoured A. B. C.—

I'm very sure it's good enough for me.

Mr; Punch has to notify and very much applaud a proposal for
practising a peculiar variety of that species of charity which consists
in clothing the naked—the naked in this case being the walls of
the London Hospital wards. By clothing1 them the sick and suffer-
ing^ would be solaced. The dreariness of bare walls aggravates the
tediousness of long detention on a. bed of pain. Mr. J. Law-
rence Hamilton,' of 4,"Gloucester Terrace, Hyde Park, suggests
that this might be'much mitigated by the introduction of_decorative
Art in Hospitals.

"I. advocate (he says) the brightening of the wards, and the cheering of
their inmates, bv the addition of suitable pictures, plates, bronzes, carvings,
parquet floors, bric-a-brac, old armour, china, sculpture, ornamental clocks,
fancy glass, tasteful glazed tiles, and other Art decorations of all sorts."

Particularly as the tapestry would harbour the Norfolk Howards.

Mr. Buckland fears that any -projecting decorations on the walls
of Hospitals would be objectionable, as likely to lodge dirt, or some
of its even^more nnpleasant living accompaniments. He proposes to
substitute for them pictures painted upon or let into the walls—
frescoes, or tiles, adorned with'encaustic'paintings, which coidd be
executed by Ladies.

"To promote this object (says Mr. Hamilton), I will give one hundred
guineas, provided that a thousand other donors each subscribes an equal or
larger sum before the 1st of May, 1877."

Mr. Hamilton believes that, a responsible Committee being
formed to carry out his idea., Messrs. Eobarts, Lubbock, & Co.,
will act as bankers to the fund. In the meanwhile, he invites
persons disposed to contribute thereunto by subscription or donation
to communicate with himself at the address above noted. Finally,

he expresses the hope that some public place will soon " be granted
as a provisional storehouse and exhibition for Art contributions pre-
vious to their distribution to the Hospitals of London." To that
hope Mr. Punch gladly gives all the publicity he can.

Why Some of Us go Circuit.

By One of the Briefless.

Member of the Utter Bar {perusing Assize List). Shall I go round
this time ? 'Hum. Let me see. " Muddeford "—can get a day's
hunting there, I think. " Wandsbury "—go over to the Chilstons
for Sunday, and have a jolly afternoon with Lily. " Swanston "—
wouldn't do any harm to go and look up Uncle George. "Lea-
mouth "—excellent quarters at hotel there; fair dinner, too.
"Deddingham"—good murder case ; shouldn't like to miss it.
Yes, I think I '11 go round as far as that, and get back to Town in
time for the Boat-race."

Sir John Lubbock makes some ants drunk, and then
charges the ants of the same hill with stupidity, because they don't
know their degraded comrades again. How should they, when the
poor creatures were disguised in liquor ? Sir John Lubbock should
be ashamed of himself, demoralising the till now respectable and
respected family of Formicce, Tours,

An R.A., boasting to Mr. Punch of the ready recognition of
rising merit by that body, quoted the case of Ouless, A.R.A. at
twenty-seven, and asked triumphantly, with some slight habitual
exasperation, " ' Ow could we have done more for him ? "