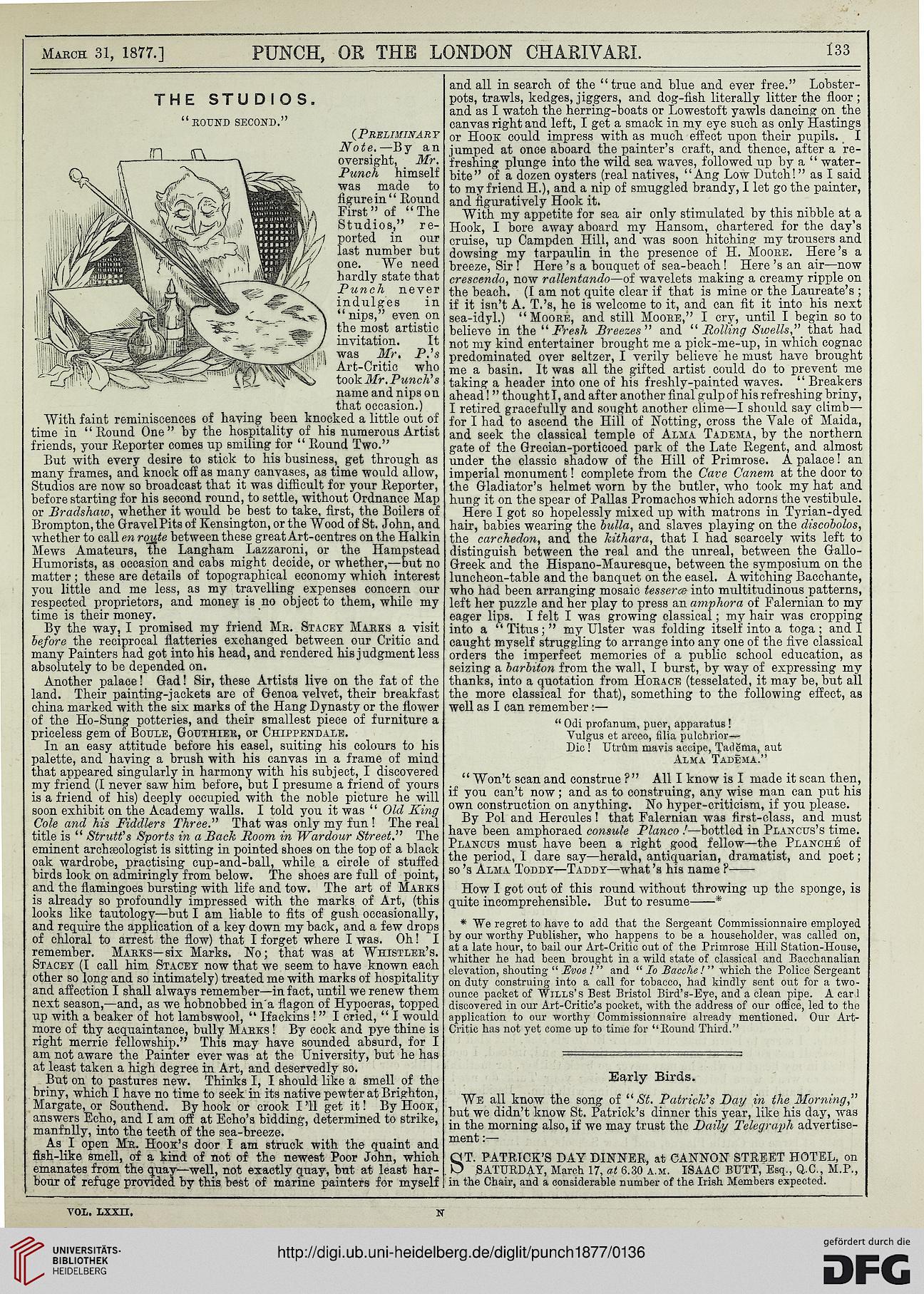 (Preliminary
Note.—By an
oversight, Mr.
Punch himself
was made to
figure in" Bound
First" of "The
Studios," re-
ported in our
last number but
one. We need
hardly state that
Punch never
indulges in
" nips," even on
the most artistic
invitation. It
was Mr. P.'s
Art-Critic who
took Mr. Punch's
name and nips on
that occasion.)

With faint reminiscences of having been knocked a little out of
time in "Round One" by the hospitality of his numerous Artist
friends, your Reporter comes up smiling for " Round Two."

But with every desire to stick to his business, get through as
many frames, and knock off as many canvases, as time would allow,
Studios are now so broadcast that it was difficult for your Reporter,
before starting for his second round, to settle, without Ordnance Map
or Bradshaw, whether it would be best to take, first, the Boilers of
Brompton, the GravelPits of Kensington, or the Wood of St. John, and
whether to call en rotate between these great Art-centres on the Halkin
Mews Amateurs, the Langham Lazzaroni, or the Hampstead
Humorists, as occasion and cabs might decide, or whether,—but no
matter; these are details of topographical economy which interest
you little and me less, as my travelling expenses concern our
respected proprietors, and money is no object to them, while my
time is their money.

By the way, I promised my friend Me. Stacey Makes a visit
before the reciprocal flatteries exchanged between our Critic and
many Painters had got into his head, and rendered his judgment less
absolutely to be depended on.

Another palace! Gad! Sir, these Artists live on the fat of the
land. Their painting-jackets are of Genoa velvet, their breakfast
china marked with the six marks of the Hang Dynasty or the flower
of the Ho-Sung potteries, and their smallest piece of furniture a
priceless gem of Bottle, Gotjthiee, or Chippendale.

In an easy attitude before his easel, suiting his colours to his
palette, and having a brush with his canvas in a frame of mind
that appeared singularly in harmony with his subject, I discovered
my friend (I never saw him before, but I presume a friend of yours
is a friend of his) deeply occupied with the noble picture he will
soon exhibit on the Academy walls. I told you it was " Old King
Cole and his Fiddlers Three." That was only my fun ! The real
title is " Struttfs Sports in a Pack Room in Wardour Street." The
eminent archaeologist is sitting in pointed shoes on the top of a black
oak wardrobe, practising cup-and-ball, while a circle of stuffed
birds look on admiringly from below. The shoes are full of point,
and the flamingoes bursting with life and tow. The art of Maeks
is already so profoundly impressed with the marks of Art, (this
looks like tautology—but I am liable to fits of gush occasionally,
and require the application of a key down my back, and a few drops
of chloral to arrest the flow) that I forget where I was. Oh! I
remember. Maeks—six Marks. No; that was at Whistlee's.
Stacet (I call him Stacey now that we seem to have known each
other so long and so intimately) treated me with marks of hospitality
and affection I shall always remember—in fact, until we renew them
next season,—and, as we hobnobbed in'a flagon of Hypocras, topped
up with a beaker of hot lambswool, " Ifaekins ! " I cried, " I would
more of thy acquaintance, bully Maeks ! By cock and pye thine is
right merrie fellowship." This may have sounded absurd, for I
am not aware the Painter ever was at the University, but he has
at least taken a high degree in Art, and deservedly so.

But on to pastures new. Thinks I, I should like a smell of the
briny, which I have no time to seek in its native pewter at Brighton,
Margate, or Southend. By hook or crook I '11 get it! By Hook,
answers Echo, and I am off at Echo's bidding, determined to strike,
manfnlly, into the teeth of the sea-breeze.

As I open Me. Hook's door I am struck with the quaint and
fish-like smell, of a kind of not of the newest Poor John, which
emanates from the quay—well, not exactly quay, but at least har-
bour of refuge provided by this best of marine painters for myself

and all in search of the "true and blue and ever free." Lobster-
pots, trawls, kedges, jiggers, and dog-fish literally litter the floor ;
and as I watch the herring-boats or Lowestoft yawls dancing" on the
canvas right and left, I get a smack in my eye such as only Hastings
or Hook could impress with as much effect upon their pupils. I
jumped at once aboard the painter's craft, and thence, after a re-
freshing plunge into the wild sea waves, followed up by a " water-
bite" of a dozen oysters (real natives, "Ang Low Dutch!" as I said
to my friend H.), and a nip of smuggled brandy, I let go the painter,
and figuratively Hook it.

With my appetite for sea air only stimulated by this nibble at a
Hook, I bore away aboard my Hansom, chartered for the day's
cruise, up Campden Hill, and was soon hitching' my trousers and
dowsing my tarpaulin in the presence of H. Mooee. Here's a
breeze, Sir ! Here's a bouquet of sea-beach! Here's an air—now
crescendo, now rallentando—of wavelets making a creamy ripple on
the beach. (I am not quite clear if that is mine or the Laureate's ;
if it isn't A. T.'s, he is welcome to it, and can fit it into his next
sea-idyl.) "Mooee, and still Mooee," I cry, until I begin so to
believe in the "Fresh Breezes" and "Boiling SweUs,'\ that had
not my kind entertainer brought me a pick-me-up, in which cognac
predominated over seltzer, I verily believe he must have brought
me a basin. It was all the gifted artist could do to prevent me
taking a header into one of his freshly-painted waves. " Breakers
ahead! " thought I, and after another final gulp of his refreshing briny,
I retired gracefully and sought another clime—I should say climb—
for I had to ascend the Hill of Notting, cross the Vale of Maida,
and seek the classical temple of Alma Tadema, by the northern
gate of the Grecian-portieoed park of the Late Regent, and almost
under the classic shadow of the Hill of Primrose. A palace! an
imperial monument! complete from the Cave Canem at the door to
the Gladiator's helmet worn by the butler, who took my hat and
hung it on the spear of Pallas Promachos which adorns the vestibule.

Here I got so hopelessly mixed up with matrons in Tyrian-dyed
hair, babies wearing the bulla, and slaves playing on the discobolos,
the carchedon, and the kithara, that I had scarcely wits left to
distinguish between the real and the unreal, between the Gallo-
Greek and the Hispano-Mauresque, between the symposium on the
luncheon-table and the banquet on the easel. A witching Bacchante,
who had been arranging mosaic tessercs into multitudinous patterns,
left her puzzle and her play to press an amphora of Falernian to my
eager lips. I felt I was growing classical; my hair was cropping
into a "Titus;" my Ulster was folding itself into a toga; and I
caught myself struggling to arrange into any one of the five classical
orders the imperfect memories of a public school education, as
seizing a barbiton from the wall, I burst, by way of expressing my
thanks, into a quotation from Hoeace (tesselated, it may be, but all
the more classical for that), something to the following effect, as
well as I can remember:—

" Won't scan and construe ?" All I know is I made it scan then,
if you can't now; and as to construing, any wise man can put his
own construction on anything. No hyper-criticism, if you please.

By Pol and Hercules! that Falernian was first-class, and must
have been amphoraed consule Planco !—bottled in Planctts's time.
Planctjs must have been a right good fellow—the Planche of
the period, I dare say—herald, antiquarian, dramatist, and poet;
so's Alma Toddy—Taddy—what's his name ?-

How I got out of this round without throwing up the sponge, is
quite incomprehensible. But to resume-*

* We regret to have to add that the Sergeant Commissionnaire employed
by our worthy Publisher, who happens to be a householder, was called on,
at a late hour, to bail our Art-Critic out of the Primrose Hill Station-House,
whither he had been brought in a wild state of classical and Bacchanalian
elevation, shouting " Evoe ! " and " Io Bacche ! " which the Police Sergeant
on duty construing into a call for tobacco, had kindly sent out for a two-
ounce packet of Wills's Best Bristol Bird's-Eye, and a clean pipe. A car 1
discovered in our Art-Critic'* pocket, with the address of our office, led to the
application to our worthy Commissionnaire already mentioned. Our Art-
Critic has not yet come up to time for "Bound Third."

We all know the song of "St. Patrick's Day in the Morning"
but we didn't know St. Patrick's dinner this year, like his day, was
in the morning also, if we may trust the Daily Telegraph advertise-
ment :—