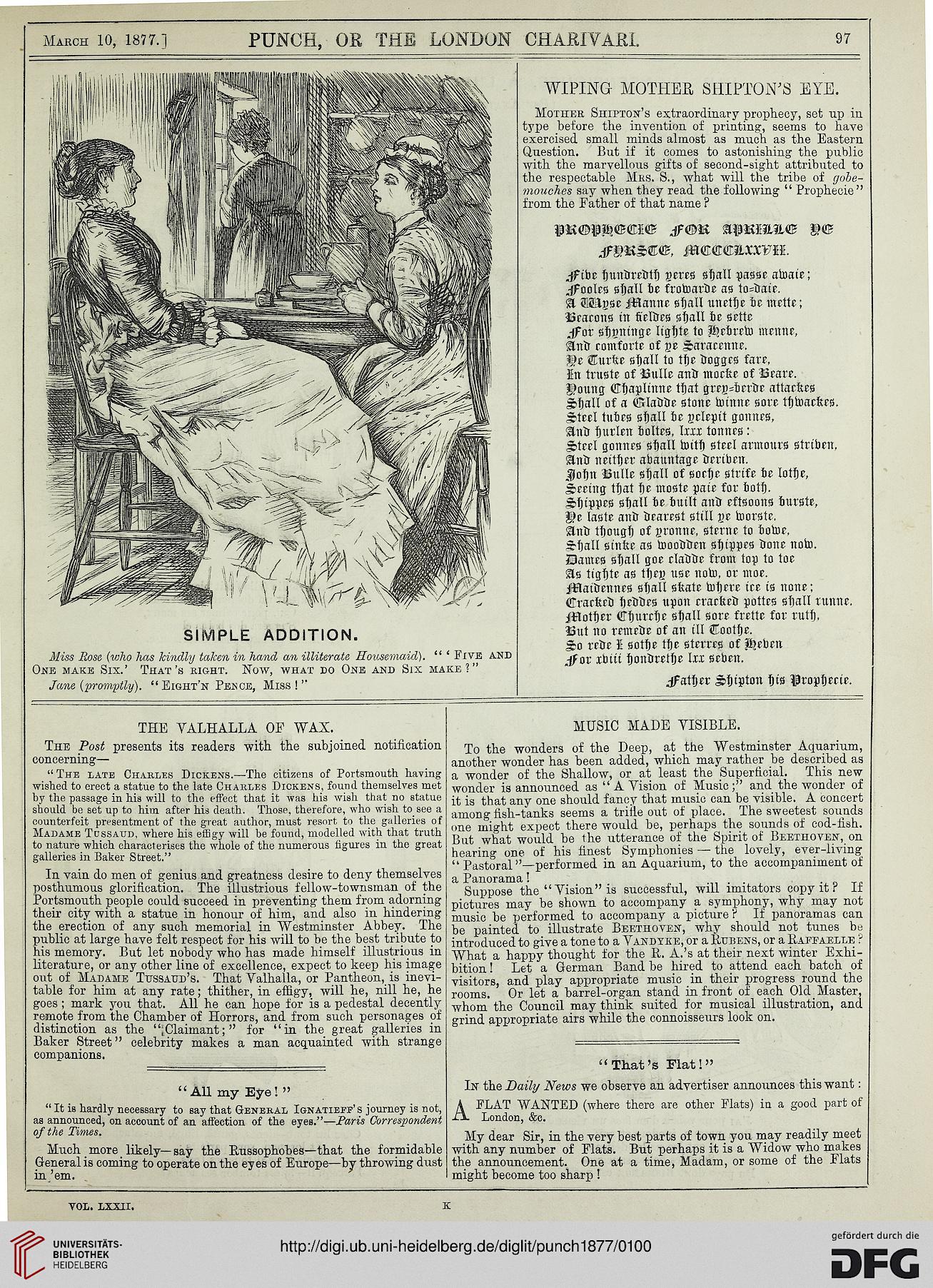 Miss Rose {who has kindly taken in hand an illiterate Housemaid). " ' Five and
One make Six.' That's right. Now, what do One and Six make?"
Jane {promptly). " Eight'n Pence, Miss!''

Mother Shipton's extraordinary prophecy, set up in
type before the invention of printing, seems to have
exercised small minds almost as much as the Eastern
Question. But if it comes to astonishing the public
with the marvellous gifts of second-sight attributed to
the respectable Mrs. S., what will the tribe of gobe-
mouches say when they read the following " Prophecie"
from the Father of that name ?

THE VALHALLA OF WAX.

The Post presents its readers with the subjoined notification
concerning—

_ " The late Charles Dickens.—The citizens of Portsmouth having
wished to erect a statue to the late Charles Dickens, found themselves met
by the passage in his will to the effect that it was his wish that no statue
should be set up to him after his death. Those, therefore, who wish to see a
counterfeit presentment of the great author, must resort to the galleries of
Madame Tussatjd, where his effigy will be found, modelled with that truth
to nature which characterises the whole of the numerous figures in the great
galleries in Baker Street."

In vain do men of genius and greatness desire to deny themselves
posthumous glorification. The illustrious fellow-townsman of the
Portsmouth people could succeed in preventing them from adorning
their city with a statue in honour of him, and also in hindering
the erection of any such memorial in Westminster Abbey. The
public at large have felt respect for his will to be the best tribute to
his memory. But let nobody who has made himself illustrious in
literature, or any other line of excellence, expect to keep his image
out of Madame Ttjssaud's. That Valhalla, or Pantheon, is inevi-
table for him at any rate; thither, in effigy, will he, nill he, he
goes ; mark you that. All he can hope for is a pedestal decently
remote from the Chamber of Horrors, and from such personages of
distinction as the ".Claimant;" for "in the great galleries in
Baker Street" celebrity makes a man acquainted with strange
companions.

" It is hardly necessary to say that General Ignatieff's journey is not,
as announced, on account of an affection of the eyes."—Paris Correspondent
of the Times.

To the wonders of the Deep, at the Westminster Aquarium,
another wonder has been added, which may rather be described as
a wonder of the Shallow, or at least the Superficial. This new
wonder is announced as " A Vision of Music;" and the wonder of
it is that any one should fancy that music can be visible. A concert
among fish-tanks seems a trifle out of place. The sweetest sounds
one might expect there would be, perhaps the sounds of cod-fish.
But what would be the utterance of the Spirit of Beethoven, on
hearing one of his finest Symphonies — the lovely, ever-living
" Pastoral "—performed in an Aquarium, to the accompaniment of
a Panorama!

Suppose the "Vision" is successful, will imitators copy it ? If
pictures may be shown to accompany a symphony, why may not
music be jjerformed to accompany a picture'? If panoramas can
be painted to illustrate Beethoven, why should not tunes be
introduced to give a tone to a Vandyke, or a Rubens, or a Rapfaelle ?
What a happy thought for the R. A.'s at their next winter Exhi-
bition ! Let a German Band be hired to attend each batch of
visitors, and play appropriate music in their progress round the
rooms. Or let a barrel-organ stand in front of each Old Master,
whom the Council may think suited for musical illustration, and
grind appropriate airs while the connoisseurs look on.

In the Daily News we observe an advertiser announces this want:

AFLAT WANTED (where there are other Flats) in a good part of
London, &c.

My dear Sir, in the very best parts of town you may readily meet
with any number of Flats. But perhaps it is a Widow who makes
the announcement. One at a time, Madam, or some of the Flats
might become too sharp !