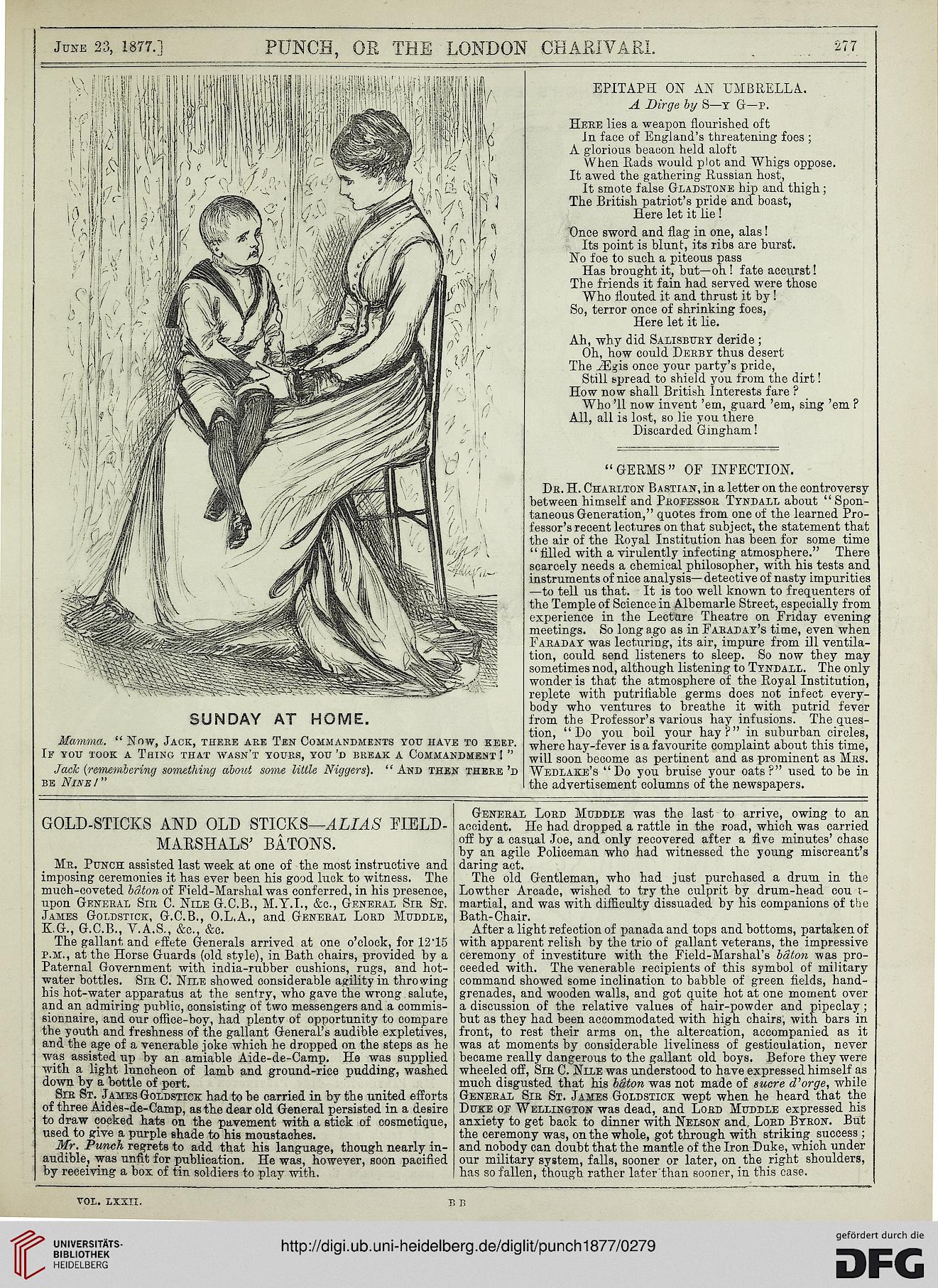 Mamma. " Now, Jack, there are Ten Commandments you have to keep.
If you took a Thing that wasn't tours, you'd break a Commandment I "

Jack (remembering something about some little Niggers). " And then there'd
be Nine/"

In face of England's threatening foes ;

When Rads would plot and Whigs oppose.

It awed the gathering Russian host,
It smote false Gladstone hip and thigh ;

The British patriot's pride and boast,
Here let it lie !

Once sword and flag in one, alas!

Its point is blunt, its ribs are burst.
No foe to such a piteous pass

Has brought it, but—oh ! fate accurst!
Tbe friends it fain had served were those

Who flouted it and thrust it by!
So, terror once of shrinking foes,
Here let it lie.

Ah, why did Salisbury deride ;

Oh, how could Derby thus desert
The JEgis once your party's pride,

Still spread to shield you from the dirt!
How now shall British Interests fare ?

Who'll now invent 'em, guard 'em, sing 'em ?
All, all is lost, so lie you there
Discarded Gingham!

Dr. H. Charlton Bastian, in a letter on the controversy
between himself and Professor Tyndall about " Spon-
taneous Generation," quotes from one of the learned Pro-
fessor's recent lectures on that subject, the statement that
the air of the Royal Institution has been for some time
" filled with a virulently infecting atmosphere." There
scarcely needs a chemical philosopher, with his tests and
instruments of nice analysis— detective of nasty impurities
—to tell us that. It is too well known to frequenters of
the Temple of Science in Albemarle Street, especially from
experience in the Lecture Theatre on Friday evening
meetings. So long ago as in Faraday's time, even when
Faraday was lecturing, its air, impure from ill ventila-
tion, could send listeners to sleep. So now they may
sometimes nod, although listening to Tyndall. The only
wonder is that the atmosphere of the Royal Institution,
replete with putrifiable germs does not infect every-
body who ventures to breathe it with putrid fever
from the Professor's various hay infusions. The ques-
tion, "Do you boil your hay?" in suburban circles,
where hay-fever is a favourite complaint about this time,
will soon become as pertinent and as prominent as Mrs.
Wedlake's "Do you bruise your oats?" used to be in
the advertisement columns of the newspapers.

Mr._ Punch assisted last week at one of the most instructive and
imposing ceremonies it has ever been his good luck to witness. The
much-coveted baton of Field-Marshal was conferred, in his presence,
upon General Sir C. Nile G.C.B., M.Y.L, &c, General Sir St.
James Goldsttck, G.C.B., O.L.A., and General Lord Muddle,
E.G., G.C.B., Y.A.S., &c, &c.

The gallant and effete Generals arrived at one o'clock, for 12*15
p.m., at the Horse Guards (old style), in Bath chairs, provided by a
Paternal Government with india-rubber cushions, rugs, and hot-
water bottles. Sir C. Nile showed considerable agility in throwing
his hot-water apparatus at the sentry, who gave the wrong salute,
and an admiring public, consisting of two messengers and a commis-
sionnaire, and our office-boy, had plentv of opportunity to compare
the youth and freshness of the gallant General's audible expletives,
and the age of a venerable joke which he dropped on the steps as he
was assisted up by an amiable Aide-de-Camp. He was supplied
with a light luncheon of lamb and ground-rice pudding, washed
down by a bottle of port.

Sir St. James Goldstick had to be carried in by the united efforts
of three Aides-de-Camp, as the dear old General persisted in a desire
to draw cocked hats on the pavement with a stick of cosmetique,
used to give a purple shade to his moustaches.

Mr. Punch regrets to add that his language, though nearly in-
audible, was unfit for publication. He was, however, soon pacified
by receiving a box of tin soldiers to play with.

General Lord Muddle was the last to arrive, owing to an
accident. He had dropped a rattle in the road, which was carried
off by a casual Joe, and only recovered after a five minutes' chase
by an agile Policeman who had witnessed the young miscreant's
daring act.

The old Gentleman, who had just purchased a drum in the
Lowther Arcade, wished to try the culprit by drum-head cou t-
martial, and was with difficulty dissuaded by his companions of the
Bath-Chair.

After a light refection of panada and tops and bottoms, partaken of
with apparent relish by the trio of gallant veterans, the impressive
ceremony of investiture with the Field-Marshal's baton was pro-
ceeded with. The venerable recipients of this symbol of military
command showed some inclination to babble of green fields, hand-
grenades, and wooden walls, and got quite hot at one moment over
a discussion of the relative values of hair-powder and pipeclay ;
but as they had been accommodated with high chairs, with bars in
front, to rest their arms on, the altercation, accompanied as it
was at moments by considerable liveliness of gesticulation, never
became really dangerous to the gallant old boys. Before they were
wheeled off, Sir C. Nile was understood to have expressed himself as
much disgusted that his baton was not made of sucre d'orge, while
General Sir St. James Goldstick wept when he heard that the
Duke of Wellington was dead, and Lord Muddle expressed his
anxiety to get back to dinner with Nelson and. Lord Byron. But
the ceremony was, on the whole, got through with striking success ;
and nobody can doubt that the mantle of the Iron Duke, which under
our military system, falls, sooner or later, on the right shoulders,
has so fallen, though rather later'than sooner, in this case.