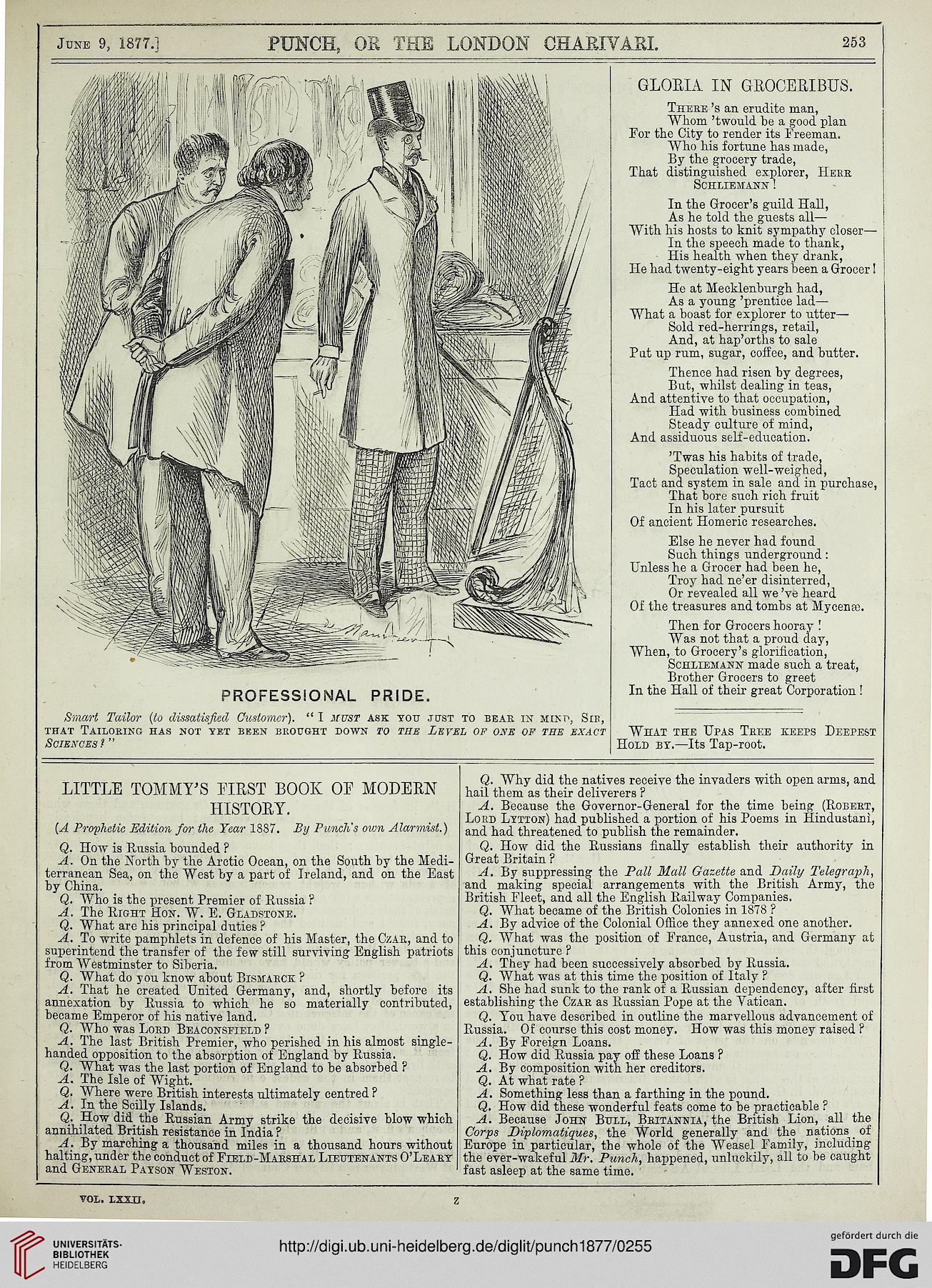 Smart Tailor (to dissatisfied Customer). " I must ask you jctst to beak in mind, Sib,
that Tailoring has not yet been brought down to the Level of one of the exact
Sciences? "

Whom 'twould be a good plan
For the City to render its Freeman.

Who his fortune has made,

By the grocery trade,
That distinguished explorer, Hebe

In the Grocer's guild Hall,
As he told the guests all—

With his hosts to knit sympathy closer—
In the speech made to thank,
His health when they drank,

He had twenty-eight years been a Grocer I

He at Mecklenburgh had,
As a young 'prentice lad—

What a boast for explorer to utter—
Sold red-herrings, retail,
And, at hap'orths to sale

Thence had risen by degrees,

But, whilst dealing in teas,
And attentive to that occupation,

Had with business combined

'Twas his babits of trade,

Speculation well-weighed,
Tact and system in sale and in purchase,

That bore such rich fruit

In his later pursuit
Of ancient Homeric researches.

Else he never had found
Such things underground:

Unless he a Grocer had been he,
Troy had ne'er disinterred,
Or revealed all we've heard

Of the treasures and tombs at Mycente.

Then for Grocers hooray !

Was not that a proud day,
When, to Grocery's glorification,

Schliemann made such a treat,

Brother Grocers to greet
In the Hall of their great Corporation !

(A Prophetic Edition for the Tear 1887. By Punch's own Alarmist.)
Q. How is Russia bounded ?

A. On the North by the Arctic Ocean, on the South by the Medi-
terranean Sea, on the West by a part of Ireland, and on the East
by China.

Q. Who is the present Premier of Russia ?
A. The Right Hon. W. E. Gladstone.
Q. What are his principal duties ?

A. To write pamphlets in defence of his Master, the Czar, and to
superintend the transfer of the few still surviving English patriots
from Westminster to Siberia.

Q. What do you know about Bismarck ?

A. That he created United Germany, and, shortly before its
annexation by Russia to which he so materially contributed,
became Emperor of his native land.

Q. Who was Lord Beaconsfield ?

A. The last British Premier, who perished in his almost single-
handed opposition to the absorption of England by Russia.
Q. What was the last portion of England to be absorbed ?
A. The Isle of Wight.

Q. Where were British interests ultimately centred ?
A. In the Scilly Islands.

Q. How did the Russian Army strike the decisive blow which
annihilated British resistance in India ?

A. By marching a thousand miles in a thousand hours without
halting, under the conduct of Field-Marshal Lieutenants O'Leary
and General Pay son Weston.

Q. Why did the natives receive the invaders with open arms, and
hail them as their deliverers ?

A. Because the Governor-General for the time being (Robert,
Lord Lytton) had published a portion of his Poems in Hindustani,
and had threatened to publish the remainder.

Q. How did the Russians finally establish their authority in
Great Britain ?

A. By suppressing the Pall Mall Gazette and Daily Telegraph,
and making special arrangements with the British Army, the
British Fleet, and all the English Railway Companies.

A. By advice of the Colonial Office they annexed one another.

Q. What was the position of France, Austria, and Germany at
this conjuncture ?

A. They had been successively absorbed by Russia.

Q. What was at this time the position of Italy ?

A. She had sunk to the rank of a Russian dependency, after first
establishing the Czar as Russian Pope at the Yatican.

Q. You have described in outline the marvellous advancement of
Russia. Of course this cost money. How was this money raised P

A. By Foreign Loans.

Q. How did Russia pay off these Loans ?

A. By composition with her creditors.

A. Something less than a farthing in the pound.

Q. How did these wonderful feats come to be practicable ?

A. Because John Bull, Britannia, the British Lion, all the
Corps Diplornatiques, the World generally and the nations _ of
Europe in particular, the whole of the Weasel Family, including
the ever-wakeful Mr. Punch, happened, unluckily, all to be caught
fast asleep at the same time.